It’s not often that an Aussie filmmakers debut feature film is a broad scope sci-fi film that tackles some fascinating themes, but here we are with Perthian Grant Sputore’s I Am Mother. At the center of this futuristic fare is a Clara Rugaard’s ‘Daughter’, a girl raised by a robot called ‘Mother’ (Rose Byrne). This is not a distinctly Australian film, but a lot like David Twohy’s Pitch Black, this sci-fi film utilises the Australian landscape to perfection, amplifying the dystopian aesthetic wonderfully. At once, this is a story about the way humanity works to find roots to establish itself in the world after a presumed apocalypse, but then, midway through, it changes into something different, raising questions about whether humanity can be trusted, or whether mankinds android creations are the new rulers of the world. There are some broad, big ideas that I Am Mother doesn’t always pull off, but it’s the fact that Sputore wasn’t afraid to go big that makes this a superb film. Also, the robot creation by Weta is – as expected – simply brilliant.


There are a few films on this list that have been done dirty by Australian audiences, and right up there at the top of the list is Sophie Hyde’s ode to friendship and love, Animals. Grounded by two of the best performances in an Aussie film this year, this film should have been a hit. Holliday Grainger and Alia Shawkat are so watchable and entertaining in the way they embrace the challenge of the ‘quarter life crisis’ that faces so many millennials out there. Hyde embraces the questions that come with trying to embrace feminism in a modern age – how do women tackle sexual freedom while also wanting to tear down the patriarchy? How two strong feminist friends deal with the issue of marriage in their relationship – a concept that their style of feminism willingly rejects – is explored in depth. Animals is entertaining and engaging in the same way that Booksmart is, and ideally, they should be viewed as a pair, with Animals being the older sibling to Booksmart’s headstrong youth.


Damon Gameau knows how to make an entertaining documentary, one that’s full of encouragement and hope, full of smiles and smarts, and he employs all of the tricks in his toolbox to make his climate change documentary not the doom-and-gloom fest it so easily could have been. 2040 works so well because it gives the viewer a hope that is so often lacking in the discussion surrounding climate change. The way Gameau travels the world (all the while addressing the hypocritical way that he’s flying around the world making a doco about climate change) visiting places where people are making changes for the better. Underwater seaweed farms, communities in India connected by solar panels, farmers revegetating land, and more, are all ways that the world is changing for the better in rarely publicised ways. But, the key to 2040’s success is the way Gameau reminds people that while devastating is definitely coming, it can be tempered by this united approach to tackling climate change. A hopeful, positive film that encourages viewers to a call to action.


I saw Me and My Left Brain back in 2018, and I enjoyed it at home, but it wasn’t until I saw it again in a cinema with an audience that I properly appreciated Alex Lykos’ brand of comedy. The laughs were strong and joyous, reacting to this wonderful romantic comedy vibe that Lykos had crafted. In my review, I commented on the way that Lykos pulls from the toolbox of Woody Allen, and I stand by that assessment, but on repeat viewings I can see how Lykos has made that Allen-esque comedy distinctly Australian, and most importantly, distinctly ‘Alex Lykos-esque’. 2019 was the year that Australian comedies made a major comeback, and while I want to say that audiences responded in kind, unfortunately they didn’t. And due to that, Me and My Left Brain was one of the major casualties, and by gosh, it deserved so much more than it did.


2019 gave us not one, but two essential Adam Goodes documentaries. They compliment each other perfectly, with Daniel Gordon’s The Australian Dream working as an exploration of all the material within The Final Quarter. Here, Stan Grant guides the audience through the many facets of racism in Australia, exposing with harsh clarity how caustic and cruel the society of Australia is when it comes to the treatment of Indigenous Australians. The way The Australian Dream exposes the effects of racism on Adam Goodes should leave viewers with no doubt that he was wronged by the media, by the AFL, and by the fans. The Australian Dream works in tandem with The Final Quarter, expanding on the footage that makes up that film, and giving Goodes the chance to discuss the impact of racism on him. This is sobering viewing, working as a reminder to all those white folks who think they’re doing the right thing that they can do much, much better to help combat racism.


Thomas M. Wright’s Acute Misfortune uncomfortably sits alongside films like Snowtown and Chopper as being honest and brutal portrayals of Australian figures. But, unlike those films, Acute Misfortune isn’t about a violent murderer, but instead it’s about artist Adam Cullen and his abusive relationship with journalist Erik Jensen. Just like 2018’s Sweet Country and Strange Colours, Acute Misfortune is the kind of film that, if it were made by an American or European filmmaker, it would be a massive critical success. But the cruelty of the nature of Australian films means that this was never going to find the audience it deserved, and would never appear on the deserving ‘best of 2019’ international lists that it warrants. Thomas M. Wright is a director to watch, and Acute Misfortune is the kind of calling card film that gets directors like Justin Kurzel, Andrew Dominik, and David Michôd on the map.


Mirrah Foulkes is the new Jennifer Kent. With Judy & Punch, this actress turned director has crafted a searing pitch-black comedy that exposes and explores the intricacies of violence in society. With the powerful script that Foulkes has written, she provides the foundation for two of Australia’s great actors – Damon Herriman and Mia Wasikowska – to work their magic. The period costumes and set design is brilliant, adding to the immersion of this age old story of an abusive puppeteer getting his comeuppance. Alongside Animals, Judy & Punch is a proudly feminist affair, celebrating the lives of women and condemning the brutality of men that is allowed to flourish in an untethered patriarchal society.


Who’d have thunk that in the year of 2019, Australia would get not one, not two, but three romantic comedies? It’s a pretty great year for a revival of a long dormant genre. It’s a great joy then to see that Wayne Blair’s ultra-joyous Top End Wedding found a receptive market who lapped up the story of the ever luminous Miranda Tapsell as she went on a journey to find her mother so she could get married. There’s so much to love about Top End Wedding, from the way that Tapsell’s Lauren is successful in her career, to the ever smile inducing Huw Higginson as Lauren’s father, to the finest climax of the year, with the wedding ceremony on the Tiwi Islands. While there are moments where Top End Wedding falters, it’s the final half hour that really cements this is a modern classic in the making. Thinking about Ursula Yovich’s role as Lauren’s mother, and the way she brings such beauty and warmth to the role makes me well up as I’m writing this. There were a few ‘firsts’ with Australian films in 2019, and Top End Wedding marked the first Indigenous romantic comedy film, a trend which I cannot wait to see continue.


2019 was an exceptional year for documentaries, and while there were many that were deservedly successful, it’s this documentary on Aussie artist Keith Looby that slipped through the cracks. With a sole screening at the 2019 Melbourne Documentary Film Festival, it’s understandably that many may not have heard about Looby, but hopeful its prominent place on this list means that people will seek it out. This acerbic icon of the art world makes for one heck of an engaging subject as directors Ian Knight and Nick Garner work to explore Keith Looby’s fractured relationship with politics, galleries, and other artists. At one point, an interview subject realises they shouldn’t be talking to the filmmakers and simply ups and walks out, proving how contentious Keith Looby is as an artist. This is a brilliantly entertaining expose into one of Australia’s best and most controversial artists. When it eventually reappears somewhere down the line, watch this, you won’t regret it.


Judas Collar is the one film on this list that I’ve seen the most. It pains me to not have it in the top ten, but I want to stress, it’s just as worthy of a place as those that are in the list. This is a genuinely brilliant film that I won’t go on too much about here as I’ll simply direct you to reading my review. Director Alison James and producer Brooke Silcox are doing the hard yards to try and get this film in front of Oscar voters, and you know what, I believe this one deserves the nomination and the win. It’s that great. 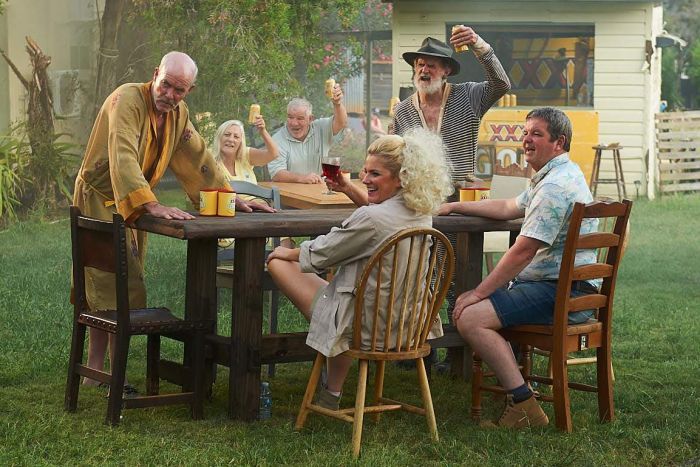