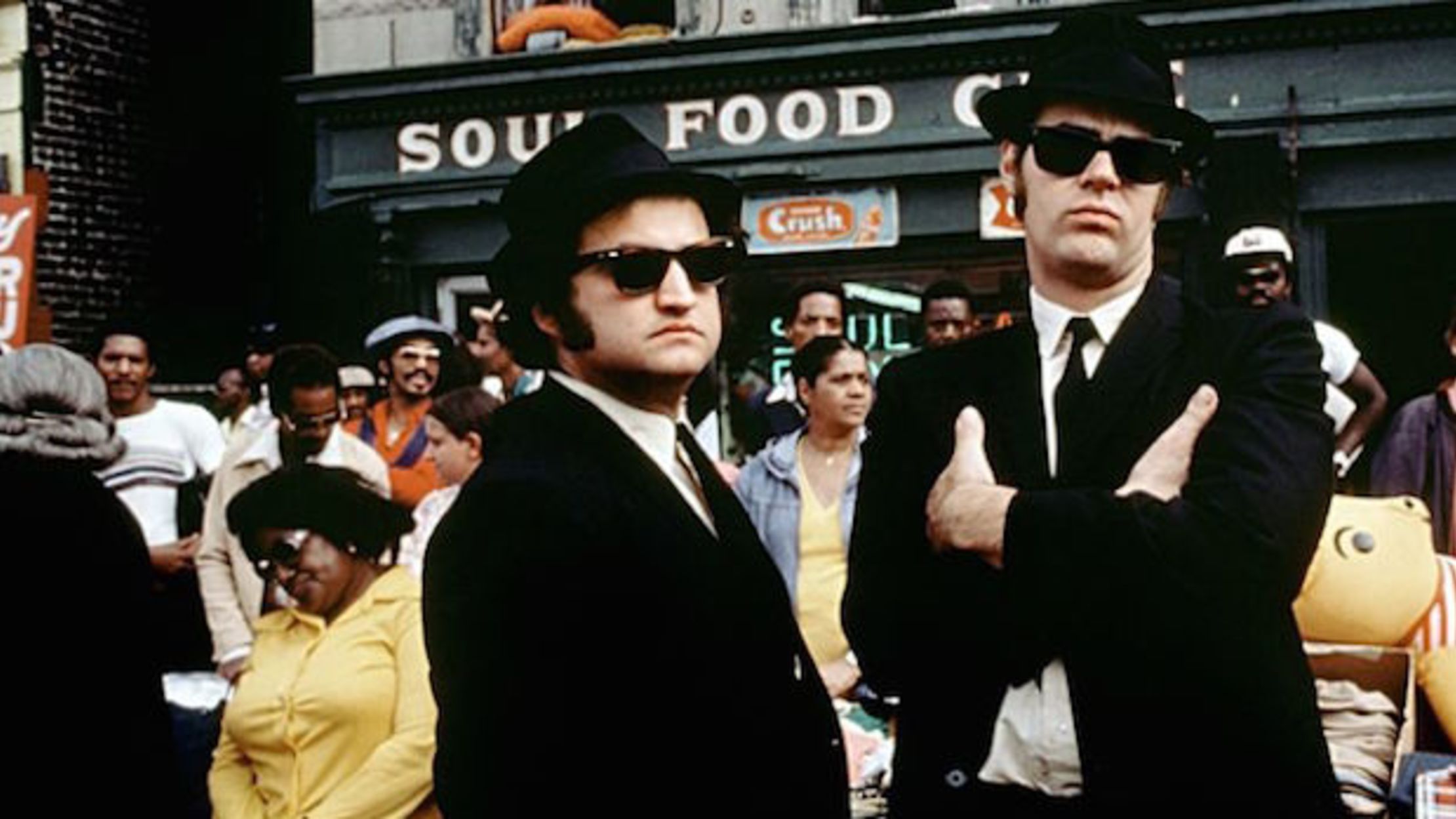 The bottle also broke when Aykroyd and Landis attempted to recapture lightning eighteen years later for Blues Brothers 2000. The 1990s weren’t a banner period for either talent – though Aykroyd opened the decade with an Oscar nomination for Driving Miss Daisy and would do lovely character actor work in the likes of Sneakers and My Girl, and I’ll go to bat for Landis’ Oscar (no relation) any and every day of the week – and their reduced creative clout meant the production of Blues Brothers 2000 was heavily compromised. Landis has described the film as “very, very, very truncated … They [the studio] insisted it be PG-rated, which meant no profanity. They insisted it have a child. They were essentially doing everything they could to make us not make it” (Wild and Crazy Guys, p. 45). Stubbornness prevailed and they did make it, but the finished film is discernibly handicapped by studio interference and the absence of Belushi. Aykroyd is an entrepreneur as much as an artist – see also his franchising of Ghostbusters, his return to the Coneheads in the 90s, his House of Blues and Crystal Head Vodka businesses – but following Blues Brothers 2000 has thankfully shied away from further cinematic outings for Jake and Elwood.

Whatever stink Blues Brothers 2000 carries, 1980’s The Blues Brothers remains unimpeachable. The film was a financial success, coming in 9th at the US box office that year with $57 million and earning a worldwide total of $115 million. But box office is no barometer of a film’s worth and longevity; The Blues Brothers’ cult shadow stretches far and the film remains, as noted above, eminently more watchable than its expensive brethren and comedic contemporaries.

On the subject of box office though, it’s a fascinating and sobering exercise to compare the box office of 1980 to recent years. While a Star Wars film (The Empire Strikes Back) tops that year’s box office – not much has changed there – the rest of the top 10 are 9 to 5, Stir Crazy, Kramer vs. Kramer, Any Which Way You Can, Private Benjamin, Coal Miner’s Daughter, Smokey and the Bandit II, The Blues Brothers, and Ordinary People. That’s a predominantly and refreshingly earthbound, human-anchored selection of films, with only three sequels, three acclaimed dramas (two of them Best Picture Oscar winners) and six crowd-pleasing comedies (two of them female-led), with nary a superhero or Disney film in sight. Moreover, dig deeper into that year’s box office and you’ll see The Blues Brothers wasn’t the only musical to make bank in 1980: lower down the ranks there’s Popeye (no. 11), The Jazz Singer (no. 17), Xanadu (no. 21), and Alan Parker’s Fame at no. 24.

Though it’s commonplace thinking that the Hollywood musical died with the spectacular floppage of Doctor Dolittle and Hello, Dolly! in the late 1960s – and that’s true to a degree – the genre never really disappeared from screens. To name a handful, the 1970s gave us Fiddler on the Roof, Cabaret, The Rocky Horror Picture Show, and Grease; the 1990s gifted a slate of Disney animated musicals; and the 21st century has brought us Moulin Rouge, La La Land, The Greatest Showman, the delightful Sing Street, the Step Up and High School Musical and Pitch Perfect series, and screen versions of Chicago, Phantom of the Opera, Dreamgirls, Mama Mia! and 2019’s notorious Cats. And then there’s the 1980s, which on top of the abovementioned 1980 releases also offered up (deep breath) Annie, The Apple, The Best Little Whorehouse in Texas, Can’t Stop the Music, Dirty Dancing, Flashdance, Footloose, Grease 2, The Great Rock ‘n’ Roll Swindle, Hairspray, Little Shop of Horrors, Moonwalker, One From the Heart, Pink Floyd: The Wall, The Pirate Movie, Purple Rain, Rhinestone, Staying Alive, Streets of Fire, Victor Victoria, Yentl, and the Pavarotti-starring Yes, Giorgio. Toss in a couple of remakes of A Star is Born and a pair of Best Picture Oscar winners in Moonwalker and Chicago – okay, one of those didn’t win Best Picture – and that’s an impressive line-up for a genre constantly labelled an endangered species.

What, then, did Fame – released a few weeks before The Blues Brothers – bring to this busy table?

Youth. Gangly, awkward, vulnerable, messy, goofy, hubristic youth. And not youth ala Grease, in which the teen principles are essayed by John Travolta in his mid-twenties, Olivia Newton-John and Jeff Conway in their late twenties, and Stockard Channing in her mid-thirties. While it would be stretching to say the cast of Fame are age-appropriate, they’re not too far off orbit (Maureen Teefy is the anomaly at 26, and Barry Miller and Irene Cara are perhaps pushing it in their early twenties) and at least feel age-authentic.

Set at New York’s High School of Performing Arts, Fame chronicles four years in the lives of a handful of students as they journey from their auditions through to graduation. I don’t have a strong handle on where Fame sits right now in the popular consciousness, but I get the sense that people who’ve never seen it lump it together with Flashdance and Footloose as a cheesy 80s popcorn musical beginning with the letter ‘F’, reducing it to lycra and leg-warmers and its signature, catchy ear-worm of a title song. But Fame is a different animal; the film is sincere and at times deeply felt in its treatment of its teenage characters’ struggles – some silly, some existential, some all-too-real – and emotional highs and lows as well as their trivial pursuits, and it’s bruising when it shows adolescent concerns and aspirations brushing against the harsher realities of the adult world.

While it’s well-documented here at The Curb that Awards Don’t Matter, the fact that Fame was nominated for six Oscars, including Best Screenplay for Christopher Gore – and won Best Score for Michael Gore and Best Song for its titular ditty – should be enough to dismiss any lingering notions of the film as just another 80s cheese machine. It also speaks volumes that director Alan Parker made this as his follow-up to Midnight Express – a grim drama based on the experiences of an American imprisoned in Turkey – and right before Shoot the Moon, one of the most lacerating portraits of divorce on film. Fame’s not just a paycheck gig, or a soufflé whipped up between more serious projects; the film is handled with the same care and integrity Parker brought to the two films bookending it and the rest of his CV. Seemingly underrated despite being a two-time Oscar nominee, Parker was one of several British filmmakers hailing from advertising who rolled into Hollywood in the late 1970s and early 1980s, along with Ridley Scott, Tony Scott, and Adrian Lyne. Where Lyne and Tony Scott chased commerce and Ridley Scott pursued a marriage of commerce and art (and bloat, but that’s for another time…), Parker gravitated towards dramas – including Midnight Express, Shoot the Moon, Birdy, Angel Heart, Mississippi Burning, and Angela’s Ashes – and musicals. He would helm five musicals in total – his screen debut Bugsy Malone, then Fame, then Pink Floyd: The Wall, The Commitments, and Evita – none of them particularly alike. It’s an eclectic, wholly original filmography, and whilst there are some misses – and, like his Midnight Express scribe and Evita producer Oliver Stone, subtlety isn’t Parker’s strong suit – it’s an impressive body of work.

Befitting the work of a former commercial director, Fame has oodles of style. Parker and cinematographer Michael Seresin – a regular collaborator, who would later shoot entries in the Harry Potter and Planet of the Apes series – give the film a visual texture that outclasses most of its peers. Think of five other teen movies from the 1980s. Aesthetically, they’re all probably cut from very similar cloth: brightly lit, functionally composed, etc. Ditto for five musicals from the decade. Simply put, it’s hard to think of a teen movie or musical from the 1980s that looks as good as Fame.

As an ensemble picture, viewers will naturally gravitate towards some story threads and characters/performances over others. On this viewing I particularly enjoyed Gene Anthony Ray’s whirling dervish energy as a troubled dance student. Maureen Teefy, while a wide margin older than her character, does thoughtful work as a drama student emerging from her shell, as does Paul McCrane as her best friend, a reminder he’s much more than Robocop’s melting man (though really, what more do you need on a CV?). And I remain steadfast that Hollywood missed the boat on Irene Cara; while she’d win a Best Song Oscar three years later (‘What a Feeling’ for Flashdance), she’s a charismatic and likeable screen presence and deserved better in terms of subsequent movie roles.

Just as mileages will vary on different characters in an ensemble, so too will mileages vary on different numbers in a musical. While the song and dance numbers in Fame are sparse, they’re mostly winners. I’ll single out two here that are – at the risk of hyperbole – tremendously staged: ‘Hot Lunch Jam’ and the famous title song. Clips for both these set pieces are available on YouTube, here and here, but the ropey picture quality doesn’t do either justice. One of the long-running fantasy tropes of musicals is gifted performers breaking into random, spontaneous song and dance that is, somehow, exquisitely choreographed. These two sequences show what happens when gifted (albeit unrefined) performers break into random, spontaneous song and dance sans choreography: the results are living, breathing, writhing, swarming, colourful, organic, electric, spectacular messes. The work of late editor Gerry Hambling – another long-time Parker collaborator – helps create a rhythm from the artful chaos. While that impressionistic, fast-cutting style (MTV before MTV) would do more ill than good in the long run – serving to hide the limitations of singers who can’t dance, action stars who can’t fight, and actors who can’t climb fences in the decades that followed, in turn chipping away at the collective attention spans of several generations – here it finds a logical match in the untethered talent and raw energy of the performers.

As mentioned earlier, I’m not sure how many people know or talk about Fame nowadays; the IPs that seems to be most valued from the 1980s are the glossy popcorn entertainments, in contrast to the gritty and sombre fare held in high esteem from the 70s (with, of course, exceptions on both sides). Parker’s film straddles those two celluloid divides, belonging fully to neither camp. But Fame has had a surprisingly long pop culture tail: there have been multiple television offshoots (including a reality show), a stage musical, and the seemingly requisite remake, which was released in 2009. As far as remakes go, the 2009 Fame was serviceable and well-intended, but like Blues Brothers 2000 was somewhat sanitised and unnecessary. Had either Blues Brothers 2000 or Fame 2009 been released in 1980, we wouldn’t be talking about either film 40 years later; that, perhaps, is the greatest diss to those retreads and the greatest tribute to their 1980 originals.