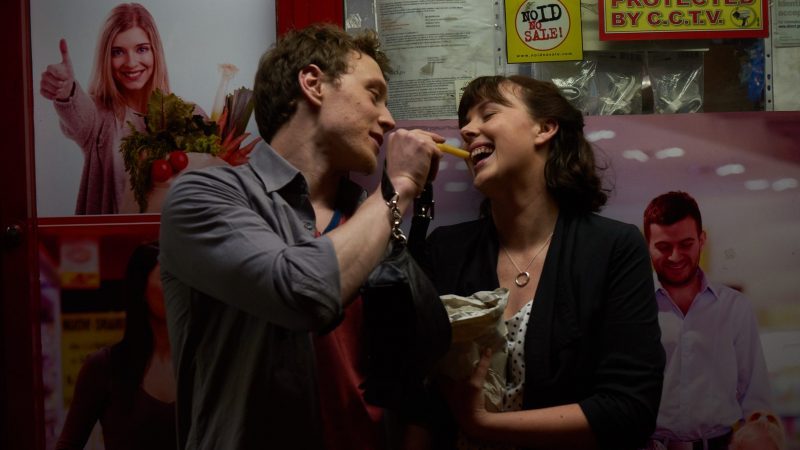 Adapting a play from stage to screen is always a difficult proposition, if for no other reason than the question why. Why translate this from stage to screen? What makes this cinematic? Will it be so obvious that the story was originally limited to one or two sets? There are exceptions, of course, but many of these adaptations are saddled with the lazy criticism of “it’s too stagey.” There are many examples, but even films that were wildly celebrated, such as Fences, left some audiences and critics grasping at that age old criticism. There are some works that get a pass, especially anything with the name William Shakespeare attached, but how about say, a romantic comedy? These are not usually seen as common stage plays but there are indeed many of them as they tend to be crowd pleasers. And this brings us to A Guide To Second Date Sex, based on Rachel Hirons’ stage play of the same name.

Luckily, Hirons wrote and directed the film, so there should be no concern regarding the integrity of the adaptation. Starring Alexandra Roach and George Mackay, the focus is on two people horribly wronged (for very different reasons) in their last, long-term, committed relationship. As it is a romantic comedy, all of their idiosyncrasies end up on full display and things get, well, complicated.

The strengths of the play, if not the film, are on full display here. There are only a few scenes that take place outside of Ryan’s (Mackay) apartment and they all feel forced in comparison to the majority of the film. However, Ryan and Laura (Roach) are wonderful together as they share a similar anxious energy even when working in opposite directions. Even when things aren’t going well (which is often), there is a palpable chemistry between the two that leaves you rooting for the couple. Strangely, the single best scene in the film is focused on internal monologue from both Ryan and Laura.  The humor and insight provided into the insecurity of the first sexual contact between a couple is simultaneously hilarious and cringe worthy.

Without giving anything away, when it comes to adaptation, there are things that work in a farcical stage play that simply come off as silly onscreen here, specifically many moments from the third act which I won’t spoil here.. Most of these have to do with plot twists, but also many of the side characters. Had the film remained with the two leads constantly, there might have been a chance for greatness to occur. But to continue to return to Ryan’s terrible misogynistic roommate Dan (Michael Socha) is a mistake that the film continues to make. Dan is definitely the kind of character where less is more, but this absolutely becomes a case of diminishing returns. His first appearance will make eyes roll, and with each subsequent cut to him on the phone, teeth grinding may be involved. There is a cute repeating bit with his other roommate, whose name is still under debate (Tom Bell), in which he is not noticed both by people and electronics alike. But even that feels like it belongs in another movie.

But as I think back on A Guide To Second Date Sex, it is fondly. Mackay’s constant fumbling and Roach’s understandably strong reactions to the twists and turns of the plot make me want to spend even more time with the pair. The two are so watchable that I would watch them talk about Meryl Streep’s favorite drink, what Jennifer Aniston smells like, practically anything. Honestly, I think the secret to their on-screen chemistry is that neither is concerned with being at their best. When two performers are willing to look silly or put their bodies in unflattering positions, it becomes quite easy to both relate to them and root for them.

A Guide To Second Date Sex is by no means a perfect film (or adaptation) and I struggle to define anything new it is doing with the romantic comedy genre. That being said, it does contain moments that are laugh out loud funny, as well as some that are incisive insights into the single life from both the male and female perspective. Even if the twists in the script seem to come a bit out of nowhere and the side characters are mildly funny at best and tedious at worst, overall this is a fine romantic comedy that demands very little from its audience and lets us enjoy two wonderful lead performances. There is nothing wrong with a solid, heartfelt romantic comedy, and that’s exactly what you get from A Guide To Second Date Sex.

Writer: Rachel Hirons (based on her play)