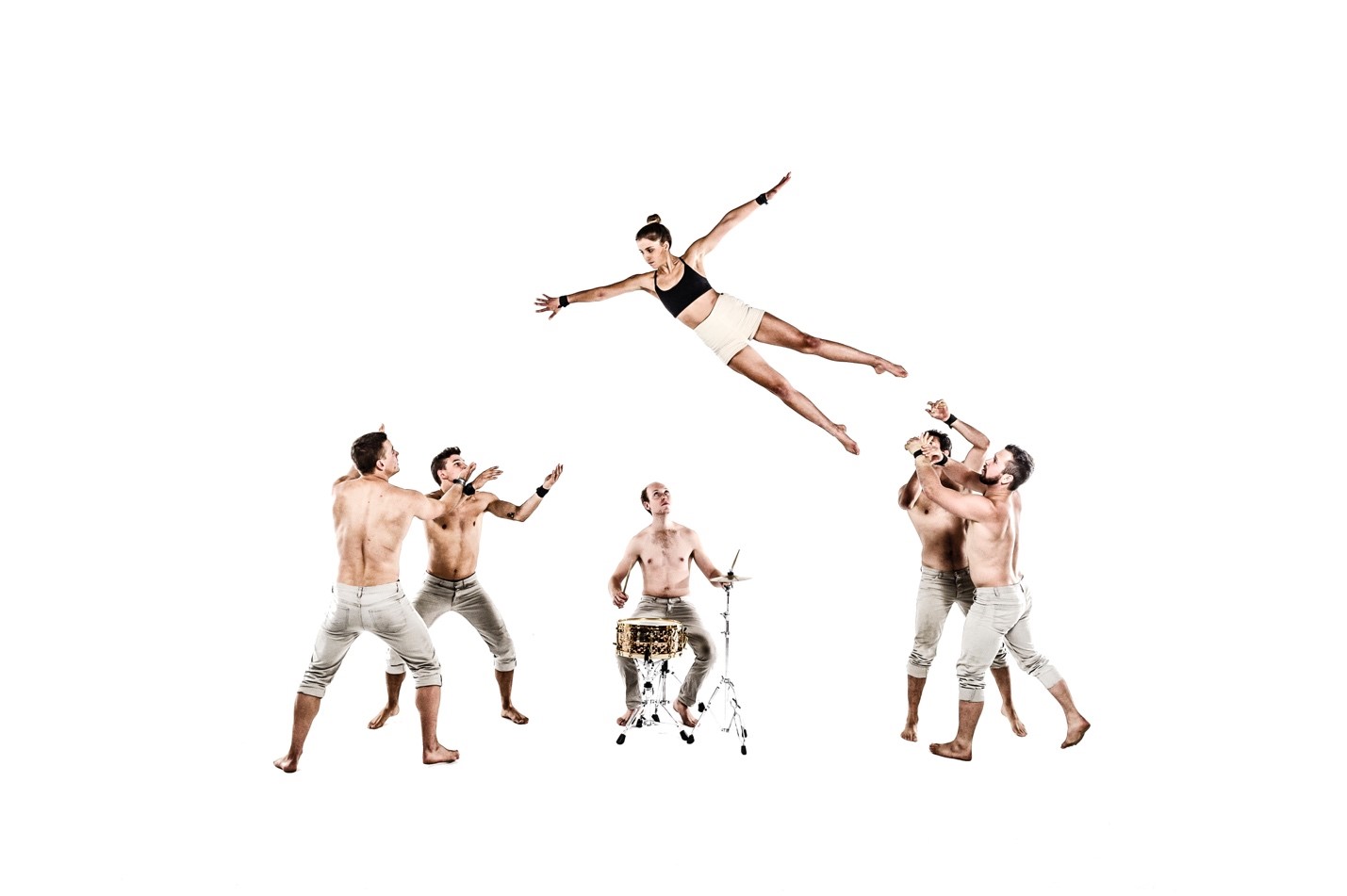 An upbeat crowd eagerly awaited the go ahead to secure their seat in the West Australian Spiegeltent tent ahead of Perth’s opening performance of A Simple Space byGravity and Other Myths. A hefty reputation precedes this one, with awards and rave reviews aplenty and 600 performances to date, safe to say I was excited to make my way into the big-ish top.

In attendance were families with toddlers, young couples, older couples, you name it there was someone ticking the demographic box. An encouraging sight to see. I even overheard some chatter from people saying this was their second time watching the show and they just had to see it again. There was positive energy in abundance, with members of the crowd making sure that those with younger children had clear views of the stage, which was positioned centrally with us wrapped around tightly on all three sides.

The crowd settled and our performers entered, looking perhaps nervous, but radiating the thrill of pre-show adrenaline. Before we have time to get familiar with each other, it’s straight into the first high impact act. Cast members shout “Falling! and spritely percussion fills the space, as the cast sprint to catch one another just before they hit the ground. It’s an instant hit of fun and high energy, asserting a solid tone for what’s to come.

The show’s pace and content is varied well, broken down through the use of almost miniature competitions between the athletes. Think ‘who can do a handstand for the longest’ but done by professional acrobats. That almost primal sense of human competitive spirit is infectious and thrilling to watch (particularly as one or two cast members start getting their kit off).

Hearing ‘circus’ might initially offer connotations of clowns and animals doing things we’re really not that comfortable watching; A Simple Space not only quickly corrects these prejudgements but demonstrates the best of what modern circus has to offer. Without the aid of any colourful  ribbons, elaborate props or tricks of the eye, this show is literally entertainment created out of thin air, relying only on the astounding capabilities and power of raw human strength. Other shows of this nature can leave you covering your eyes; with A Simple Space you can’t actually take your eyes off it. Instead, the show relies on openness and trust between performers and us as an audience. The end result is a feeling of a real human connection and a true appreciation for what you’ve just witnessed.

Of course, this is a show and of course there’s been rehearsals, but the emotions felt in the precise moment of each manoeuvre are indeed very real. It’s incredibly immersive, with everything taking place on a stage that’s well within reaching distance. The physicality of the feats achieved in this show can only be looked at in awe, delivered by artists who have devoted so much of themselves to performance and the art form.

A Simple Space is high-impact, high-energy, raw, minimalist, modern circus excellence and a show I would confidently recommend to just about anyone.

The show runs until February 16th with tickets available for purchase at Fringe World Festival 2020.

I had the absolute pleasure of catching up with A Simple Space performer and tour manager Annalise Moore. She’s very happy to be back performing in Perth, even if the heat does make things that little bit more difficult.

How does it feel to be performing at Perth Fringe Festival?

I really like Perth Fringe. I’ve been before with a different show, as you can tell it was very hot in the tent at 1.30pm so there was a bit of slipperiness to deal with! But Perth Fringe is great. Great community, so much happening.

So being in that tent with the added heat makes it even more difficult?

Yeah, especially for our show. We’re already pushing ourselves to the limit so you’re already getting hot without it being temperature hot. It’s just an added risk factor but we try our best to keep it safe!

So you’re tour manger and performer is that correct? That must keep you busy!

Yeah a little bit of extra work! But it’s good because usually with our shows we don’t actually start work until about 5pm and then we just do a show in the evening, so we’re generally free in the day so I thought why not I can do a bit of extra work! I’m happy to do that and it’s good experience too.

I’ve been with the company and doing a simple space or about 2 years now. But the show is actually about 6 years and 2 years ago they got a completely new cast so they could continue doing it and make a new show.

Would you say the show has changed over the years?

So there’s still the same basic formula because they still want to sell the same show, but different people have different body types and different skill sets so we’ve of course we’ve made it our own so we can be our genuine selves. Other than that the transition has been smooth and we’re super happy with how the show is going.

You mention people having different skillsets, does everyone come from different backgrounds and have things they prefer to do?

Exactly. Different backgrounds, some are youth circus which the company actually started out as, so those people did circus when they were young. Me myself I did gymnastics for about 10 years before dong circus so we’ve got gymnastics, dance, circus we’ve got our musician. Even people who didn’t have much experience in circus at all that kind of transitioned later on.

What would you say makes circus, circus? How would you define it?

Yeah it’s actually very broad and it can be a lot of different things, but I guess our show is pretty acrobatic. We don’t have a lot of props there’s no aerial rigs or things like that, no juggling or clowns really. When people think of circus they sometimes think of the traditional tent style maybe even animals, and we’re like no no! It’s just us doing acrobatic skills with each other and nothing else really.

And you personally, what made you want to go into circus?

It actually was a super nice transition that happened naturally. I was super worried, after school I was stressing out like I do not know what I want to do with my life, I applied for uni but really wasn’t too keen and then found circus after. I was going to gym still and then we saw people that were doing circus and thought that looks fun let’s try that! From then on I auditioned for the circus school In Melbourne and instantly loved it and thought this what I want to do.

We’ve all known each for one to two years at least so that’s how you kind of build up that trust there but the show itself is fun and light-hearted. It’s got games, so you would have seen with the first act which is based on the trust falling games where other cast members have to catch them. Even though that is choreographed in the end it’s based off things that help you build trust with each other.

A lot of the audience get really into it during the performance, do you find this adds pressure? Talk me through it!

It helps, the audience really get engaged and involved it’s very up close and personal. They could literally probably feel sweat coming off us because we have people sitting so close on the sides and at the front, giving an almost 180 view of everything.

And then personally I would say it does add pressure but a good kind of pressure. My handstand act for example, every member of the cast grabs and audience member brings them up onto stage and lies underneath me while I do handstands on top of them. So for me it’s just pressure because obviously I don’t want to fall on an audience member! But it allows me to always be switched on and challenges me for each show.

What’s going through your mind during those moments? How do you achieve that level of focus?

I would honestly say it just comes with experience. I’m much more comfortable now, doing the show for two years definitely helps. It was definitely more nerve-wracking in the beginning especially having that added pressure, but you just get better with time really.

And finally, why do you think people should come and watch A Simple Space?

I think most people enjoy it. It’s very family friendly, lots of high-level skills, very genuine, no costumes, no characters, you can just see who we are and what we’re doing together; having fun on stage and hopefully the audience is just having fun with us!

We’d love to get as many people in as possible to share what we do, so come along!