Director Kogonada’s first film Columbus was a meditation on what constitutes family and a sense of belonging. After Yang also considers these themes with a sense of delicacy and profundity that is matched to Kogonada’s meticulous aesthetic.

Adapted from the short story ‘Saying Goodbye to Yang’ by Alexander Weinstein, Kogonada has crafted a meditative science fiction tale which is philosophically rich and at its heart, deeply humanistic.

In the future, technology has evolved to introduce ‘techno sapiens’ – human appearing androids that serve various functions in society. Jake (Colin Farrell) and Kyra (Jodie Turner-Smith) purchased Yang (Justin H. Min) a ‘cultural techno’ to act as an older sibling for their adopted daughter, Mika (Malea Emma Tjandrawidjaja) as a way for her to connect with her Chinese heritage. With her since birth, one day Yang stops working, leaving the child bereft of her brother. Being a piece of tech there is the possibility that Yang can be repaired, and Jake undergoes the journey to bring Yang back to life.

Eventually taking Yang to a backyard scraps operator he is given a piece of technology initially assumed to be spyware that has been incorporated into Yang’s operating system. On further examination it turns out to be a recording of certain memories that Yang has decided are essential. As it becomes clear that Yang will never switch on again, Jake decides to see what memories Yang has stored and finds that Yang has lived a life outside his duties as Mika’s brother – one that is filled with humanity that it is presupposed techno sapiens do not experience.

Yang’s memories lead him to Ada (Haley Lu Richardson, who starred in Columbus). Ada too is not exactly human but instead a clone. As Jake discovers more about Yang’s life he realises the line between human and non-human is not as distinct as it once appeared.

Yang’s memories are in part a document of Jake and Kyra’s family, but more so they bring into focus their own philosophical and spiritual questions. Kogonada weaves Yang’s digital memories into Jake and Kyra’s memories of Yang. Conversations that were had with Yang that reveal their own humanity give weight to the idea that we are each still searching for an understanding of selfhood. Yang cannot answer complex questions about existence as his programming does not allow it, yet this limitation leads Jake and Kyra to consider who they are.

Losing Yang causes more grief for the family than expected. Ming, still a child, reacts as if she has indeed lost a human brother and acts out her frustration and rage at the unfairness of death. For Jake understanding more of Yang leads him to see that he has not just had a vital piece of technology taken from the family, but he has in fact lost someone whose realness is not just something projected on him by Mika but is somewhere inherent in the choices Yang made on his own.

Kogonada’s world-building is never forced. Although set in a distant future there is a sense of universality to the questions the film poses to the audience. In one scene with Kyra, Yang discusses Lao Tzu’s idea that the end of a caterpillar is the beginning of a butterfly. Kyra asks Yang if he believes if there is anything after life and he responds that he does not know, he can not know. Yet he gives her the wisdom that “There cannot be something without nothing.” In the period of post-humanity that After Yang characterises the weight of what is authentic, real, and human is intensely felt.

After Yang is a refreshing piece of science fiction that asks pertinent questions of the viewers – something that the best of the genre should do. Kogonada’s minimalist aesthetic suits the subject matter as a more bombastic approach would have weakened the emotional impact of the film. As it stands the film is a subtle and rewarding journey that encourages the viewer to take a moment to contemplate their own relationship with technology in a rapidly expanding world, but to also remember what it is that defines them. Our memories, our dreams, our desires are what we hold on to – what makes us a person. After Yang is an exemplary film that gives the audience a sense of wonder that is the small and overwhelming miracle that is life and what it means to be alive.

Writers: Kogonada, (based on Saying Goodbye to Yang by Alexander Weinstein) 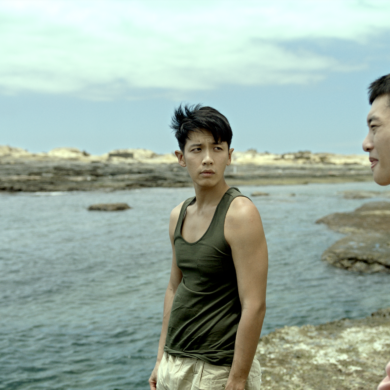