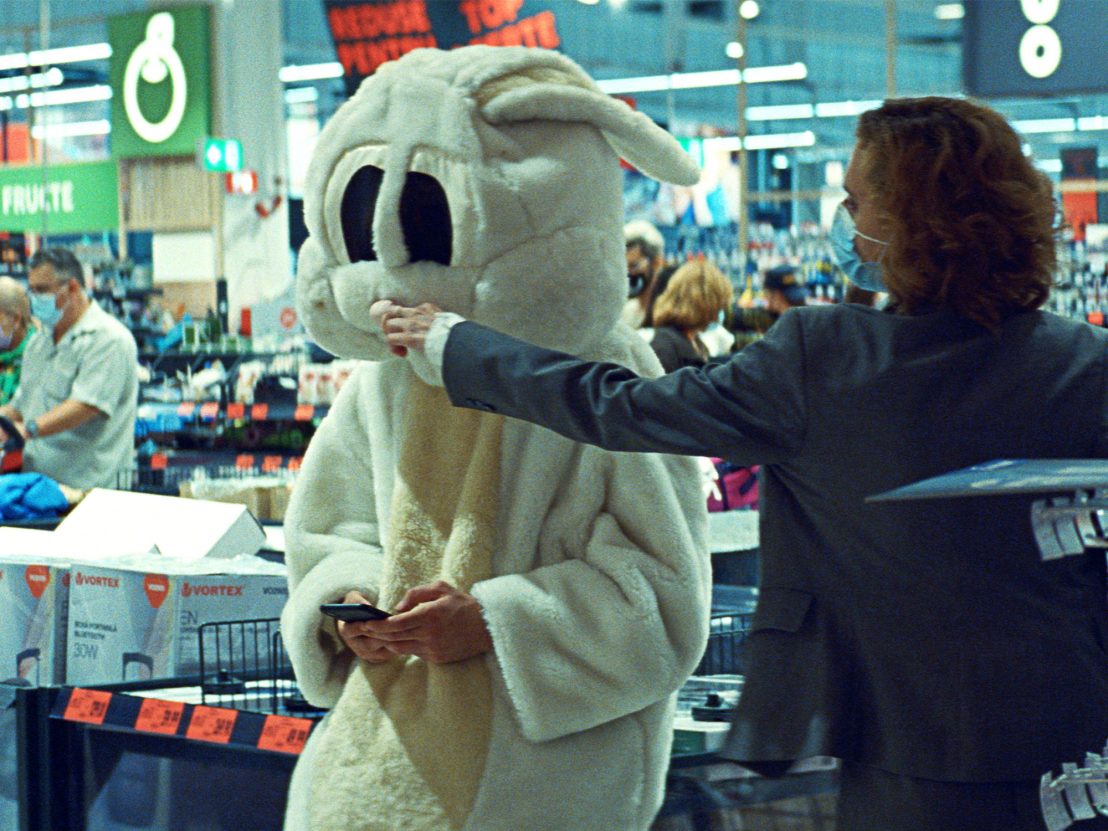 
Romanian auteur Radu Jude’s Bad Luck Banging or Loony Porn (BLB) explicitly highlights the terrifying growth of the surveillance state in a similar yet altogether different manner to his earlier films such as Uppercase Print. BLB was the winner of this year’s Berlinale Golden Bear bringing Romanian film culture to the forefront of the public’s awareness as a new wave of directors (Cristi Puiu and Cătălin Mitulescu) championing realist cinema techniques through minimalist approaches emerges. Jude’s film follows Emilia (Katia Pascariu), a school teacher who shoots a sex tape with her husband only for it to be released virally jeopardising her career and livelihood. The film radiates in pop-colour hues portraying the idyllic and warm city of Bucharest. The restrained editing and sense of improvisational street shots are inventive and solidify Jude’s status as an important director.

BLB is set in three parts, the first of which sees the audience following Emilia as she whimsically walks through the streets of Bucharest picking up flowers and answering phone calls. We follow her from afar through detached extreme long shots, in street scenes with extras covered in face masks to emphasise the virality not just of Emilia’s sex-tape but also of the pandemic. Jude’s decision to hold long takes from afar further heightens his recurring investigation of state surveillance, a theme which resonates with him due to the recent dictatorship of Nicolae Ceaușescu who ruled Romania throughout the 20th century. Emilia consistently seeks to justify her behaviour and her actions to family members and store owners she comes by; however, nobody seems capable of understanding leading her into further disarray.

The French New Wave had a habit of deconstructing classical Hollywood techniques in order to reinvent their own language of film and Jude takes this a step further in BLB. An entire sequence is devoted to didactically showing what Romanian culture is through text and image, much the same way that Godard in his fractured late 60s filmography such as Le Gai Savoir, became increasingly more interested in the discordance between sounds, language and image. Jude reflects on Romanian national poet Mihai Eminescau and his impact as well as the prevalence of domestic violence within the country, suggesting that Emilia’s moral dilemmas are only a fragment of other wider cultural issues facing Romania.

Jude’s film is apocalyptic and this is comically enhanced by the frequent scenes in which extras and cast members are featured wearing disposable masks, distorting their emotions and behaviour further. Emilia finds herself sentenced to the judgement of her colleagues and random people all of whom have strong opinions on the matter. This melange of characters and stereotypes ranging from fascists to queers and hipsters demonstrates the diverse array of opinion willing to weigh in on the outcome of Emilia’s actions.

Radu Jude’s latest film is a step away from the slow takes and cuts of his earlier films like Uppercase Print, however there is still an enticing restraint and minimalism which propels BLB on. State surveillance continues to grow and Jude’s film is a meditation on the influence the internet has over our lives.

Paddington 2 Review – If You’re Kind and Polite, the World Will Be Right