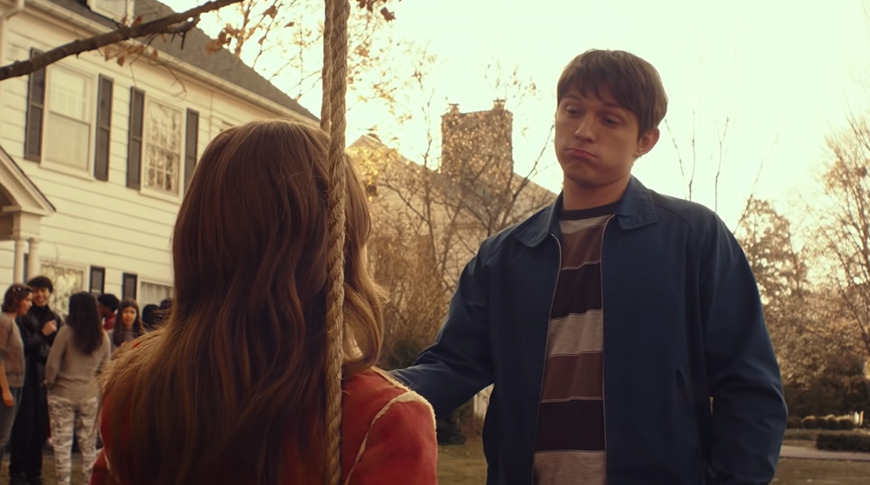 
Directed by Joe and Anthony Russo, Cherry stars Tom Holland as…“Cherry”, a stand-in for the book’s author Nico Walker. The character only known as Cherry is a young man living in Cleveland, Ohio, who falls in love with Emily (Ciara Bravo), joins the Army when he thinks he’ll never see her again, reconnects with her and gets married before his deployment, serves for two years and has horrific experiences that lead to severe panic attacks when he returns, gets hooked on OxyContin and eventually heroin with Emily, and then robs banks to pay for their out-of-control drug addiction.

On paper, Cherry has ripe (hehe, get it?) potential for a director to take Nico Walker semi-autobiographical work and form a poignant story that directly criticises the state of American youth, lack of care for mental illness, the American war machine, and the opioid epidemic. The kind of film that directors like Danny Boyle, Lorene Scafaria, Oliver Stone or Kathryn Bigelow could run wild with, just for a few obvious examples.

However, only days after the novel’s publication, the Russo brothers bought the film adaptation rights for $1 million through their independent studio AGBO, signing on to direct and produce from a screenplay by Jessica Goldberg, eventually co-written by their sister Angela Russo-Otstot.

The Russo brothers seemed like a promising choice as Cherry would be their first film after finishing off the epic one-two punch of Avengers: Infinity War and Avengers: Endgame, collectively making nearly $5 billion worldwide. They brought on Tom Holland to star, guaranteeing the project eyes and ears of anticipation as Holland is one of the most in-demand stars in the world. Cinematographer Newton Thomas Sigel is on board, who also shot the Joe Russo-written Netflix hit Extraction, as well as Winter Soldier and Civil War composer Henry Jackman. Everything sounded solid, even if the COVID-19 pandemic delayed a theatrical release and was picked up by Apple TV+ in the interim.

So what is Cherry like with all of these hot and in-demand creatives working on it? Inexplicably weird and deeply disappointing.

Above all else, Tom Holland gives this movie his absolute all. Not that I’m surprised seeing as there is a definite reason Holland is as in-demand as he is in Hollywood: he gives every role everything he has. Even when he was a younger actor on stage as Billy Elliot or on screen in The Impossible (AKA the movie I can’t think about without crying), Holland is a committed and insanely energetic performer who gives all that he can. It is no different in Cherry. This is a hard role to play physically and emotionally, and even harder to play well. Holland does so with aplomb. His anger is terrifying, his sadness real, his terror and desperation is depressingly true, and through Holland as this essentially unnamed character we feel all that we’re supposed to feel. He is an excellent conduit in a film that struggles elsewhere to tap into reality.

Despite Holland’s excellent work, Cherry is terribly frustrating. Perhaps the Russo brothers are those kind of filmmakers that work best when collaborating with a massive pool of other creatives working on a massive story. Or maybe they’re directors who are only as good as the scripts they’re given, because the kind of finely-tuned balance of emotion and spectacle that made their work in the MCU so definitive is gone from this movie.

Cherry is essentially two well-worn movie genres in one. First we have the “good man goes to war” story that is about as old as cinema itself, which then leads into the “drugs are bad” story that is all too-familiar in these modern times. Because these stories are so well-trodden, you would expect any talented filmmaker to tackle each part of the overall story with a certain unique quality and explore untapped themes that connect one to the other. Decent expectations.

Instead, the Russo brothers prove that they have no idea how to do any differently, having both war and drugs stories feel vastly inferior to the dozen or so examples in film and TV that have done it all so much better. We don’t see or feel anything new beyond the obvious ideas and plot points that have been thoroughly explored in the past. Young love, war is bad, loud drill sergeants, disorienting wide angles to simulate stress and paranoia, self-destructive behaviour, trusting idiotic friends, spiralling out of control, all underscored by constant and exceptionally bland narration that could be removed and would change nothing.

To compensate for a lack of originality with scripted storytelling, the Russo brothers pull out every single camera trick they can possibly think of, thinking it’ll be like Mike Nichols pushing cinematographer Robert Surtees to do more stuff on The Graduate than the veteran DP had done in his 30 year career at that point. Instead, it feels like first-time filmmakers fresh out of film school thinking that aspect ratio changes, unrealistic lighting, selective colour switches, and unconventional camera placements all mean something beyond what’s on the page. They don’t.

To use my above example, Mike Nichols and Robert Surtees did so much with the camera like crash zooms, slow focus pulls and complex one-take sequences because it enhanced the story filled with dramatic reveals and hilarious tension all informed by the speed of youth.

In Cherry, these choices just feel like tricks. There is no clear purpose in making the entire frame red-and-black, switching the aspect ratio during Cherry’s Army training, having pieces of dialogue appear like text informing us of new locations, mixing up regular audio with the sound of a phone call voice, or (and most infamously now) putting the camera inside the point-of-view of Tom Holland’s colon when he’s getting a cavity search.

Cherry feels like the dissolution of a dozen or so distinctive filmmaking styles that the Russo brothers pick and choose from without ever learning why those choices were made in the first place. They use negative space framing in scenes that don’t necessarily call for it, or choose to shoot scenes with alienating wide angles even though a close-up would have been far more effective. What is worse is that they are working with an excellent cinematographer like Newton Thomas Sigel who has more than once saved entire productions due to his incredible talent as visualist. I can confidently say that the Russo brothers have a “vision” because there is no way Sigel would do this by himself. His career speaks against it. Ultimately, the Russo brothers made every wrong decision you could think of and the movie is brought down scene by scene by these inexplicable ideas. Cherry doesn’t succeed at anything it tries to do beyond be a showcase for Tom Holland’s diverse talents as an actor. That is all. Who are the Russo brothers? What is a “Russo brothers movie”? Give them a better script and maybe a few more people to collaborate with, because I am just not sure what their “vision” even is after Cherry.

Writers: Angela Russo-Otstot, Jessica Goldberg, (based on the novel Cherry by Nico Walker)