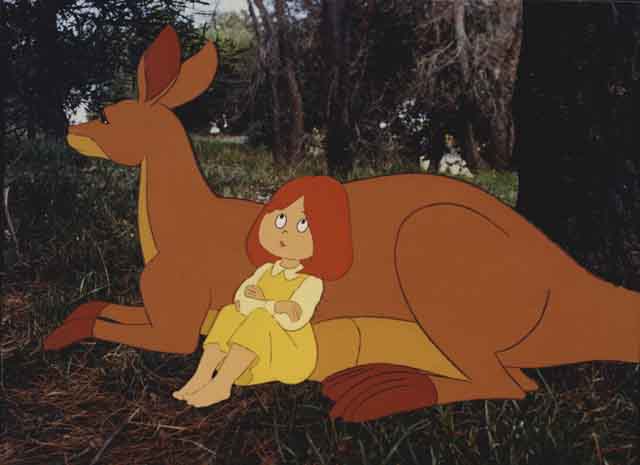 To the CHILDREN OF AUSTRALIA

In the hope of enlisting their sympathies for the many
Beautiful and frolicsome creatures of their fair land;
Whose extinction through ruthless destruction is surely being accomplished.

So opens Yoram Gross’ animated film, Dot and the Kangaroo. It’s the same preface that opens Ethel Pedley’s posthumously published children’s book of the same name, of which the film is adapted from. Dot and the Kangaroo was Pedley’s only novel, and was written with Ethel’s belief of the conservation of Australia’s flora and fauna. It’s frightening that this brief preface, written over 100 years ago, resonates so strongly in today’s society.

The narrative is simple – Dot (voiced by Barbara Frawley) is a young girl who lives with her family on an outback homestead. One day, much to her mothers disapproval, Dot heads off into the bush to retrieve some grass for her rabbit, and on her travels, tumbles down a slope and ends up in the world of Australian fauna. Lost, frightened, and far from home, Dot feels dwarfed by the world she finds herself in, and as animals start to loom and peer over her with curiosity, a humble kangaroo comes forward and gives Dot a plant root to chew on. As Dot munches away on the nourishing treat, she finds herself able to understand what the creatures are saying, and in turn, is able to converse with them. Dot finds out that the kind kangaroo had lost her joey, and will happily help Dot find her way back home.

Before we move onto the narrative themes of Dot and the Kangaroo, let’s briefly touch on the animation style of the Yoram Gross Film Studio. Established with his wife Sandra, the Yoram Gross Film Studio helped create some of the most enduring Australian animated films, with the nine Dot films and the creation of the iconic Blinky Bill films being the most notable. Dot and the Kangaroo combined both live action footage of the landscapes of the Blue Mountains with hand drawn animated characters who interacted with the natural environments. This pairing of animation and live action landscapes helped with the immersion into the story of Dot and her understanding and appreciation of the world she lives within thanks to the many Australian animals she encounters.

Through modern eyes, the animation is a little bit crude – you can’t help but notice the shape of Dot’s head change radically from scene to scene – but that doesn’t mean it’s any less endearing. The animals in particular are expressive creations that are a real treat to watch and spend time with. Kangaroo (Joan Bruce) carries an impressive level of empathy and compassion for Dot and her plight, which in turn makes Kangaroo a wonderfully kind and engaging guide through the world of Australian fauna. Kangaroo’s kindness helps the intended child audience see that the Australian bush is not to be feared, but instead welcomed and embraced.

After Kangaroo gives Dot that first bite of the plant root that helps open her eyes to the Australian bush, she warns her not to eat too much, for the root is the ‘food of understanding’ and to eat too much would mean that Dot would know too much. Dot enquires whether it’s even possible to know too much, and Kangaroo replies ‘oh indeed, yes, and it will make you miserable’. And yet, as Dot learns more about the inhabitants of the bush, she becomes more empathetic and yearns to live with these different creatures she’s formed a bond with. For Kangaroo, the surrogate child that Dot becomes helps mend the loss of her joey, and it’s this relationship that will be the one that breaks the viewers hearts. In an audacious move for a kids film, Yoram Gross opens the film with Dot crying, and closes the film with Dot crying – yet, while the film ends on heartbreaking note, this is not a dour affair, with frequent moments of joy and harmony.

Continuing on with that sad conclusion for a moment, where Dot is returned home, mourning the end of the relationship she had with Kangaroo, just like Kangaroo mourns the loss of her joey, we’re presented with one of the most glorious moments in Australian film history. Kangaroo transforms from an animated Kangaroo into real footage of a Kangaroo, at once creating a powerful image that reminds the viewer of the reality of the narrative they’ve just seen, all the while showing the permanent disconnect that Dot will have with nature from now on – she knows the truth about nature, but will never become one with it again. This is, of course, not true, given that Dot went onto have nine films in total, with the last entries taking her to Hollywood, and to, erm, Space, but for this one film, we’re left with a powerful image that should inspire viewers to live a better, more environmentally compassionate life.

Dot, as the child audience surrogate, learns about the harmonic and united world of nature. As she tells Kangaroo about the animals the come up near her house – the bugs, the possums, the small eager critters –, thanks to Barbara Frawley’s wonderful voice work, you can hear Dot’s realisation about how united her world is with nature. You can hear the connection that the actions of her human world influence a completely different world that so many feign to not understand. As day rolls into night, and then day again, Dot’s disappearance from home causes further concern from her father and his friend. Their fear of the bush is palpable. One gets so sick he could almost perish – his ignorance of how to live off the land is astonishing.


And that’s not to say that the bush isn’t to be feared, as we’re told in one genuinely terrifying song about the Bunyip. This is a song I’d somehow managed to obliterate from my mind since seeing this film as a child. Now I’ve revisited it, I fear I’ll not be able to shake the image. And, I’ll be less likely to shake the joyful singing of some ducks who sing about being terrified and hungry, or the quite adorable platypus couple who sing about how unique and bizarre they are. The songs don’t always work, but they needn’t work for this thirty-something year old – they are, after all, kids songs, and their repetitive enjoyable nature is good enough. With that said, the Willy Wagtail singing ‘clickity clack’ is downright painful to listen to, and the image of a booty-shaking Koala earlier on is also an eyebrow raiser. But, I’m applying 21st century goggles to a decidedly 20th (almost 19th) century story.

Another moment of fear is the presence of the oddly grey, and questionably dehumanised presentations of Indigenous people. Utilising dingoes to help them hunt, the Indigenous men work to track down and kill Kangaroo for food. During the Bunyip song sequence, Yoram Gross brings the imagery of Indigenous art to life, helping children be aware that Australia has an Indigenous history with a wealth of stories that come from the nature that First Nations people live within. And while the dingo hunt sequence is terrifying – after all, we empathise with the anthrompomorphised Kangaroo and don’t wish to see her turned into food – it works to remind that there are people who live off the land, and rely on the creatures that exist there to live.

This is all conjecture, and I feel I’m stretching a bit here, but I can’t shake the feeling that when you watch the chase scene through the perspective of Ethel Pedley’s words – whose extinction through ruthless destruction – that the Indigenous people are being turned into minor villains of the piece. The white men, ever ignorant of the land, who we see momentarily rip rip, woodchipping their way through the forest, turning hundred year old trees into firewood, are less villainous. Possibly Yoram Gross was less eager to make white people the villains in a kids film, but it’s hard not to see that Dot’s perspective of her family, and her existence on this land is changed because of her experience, and possibly through her eyes, her parents are to be judged or scorned for their behaviours.

It’s clear that, just like Ethel Pedley, Yoram Gross is an empathetic creator. He clearly wants to encourage respect for the planet, and respect for one another. Gross’ story is one that should be held up high and that everyone should be aware of – especially in this ever increasingly dark and dangerous world that we are living in, where America has become home to the concentration camps that are not too dissimilar from the world that Gross’ family fled from in World War II. Gross’ family was on Oskar Schindler’s list, and after moving from hiding place to hiding place, they managed to escape the Nazi regime. Flash forward to 1968, and Yoram Gross with his wife and family moved to Australia, where they established the Yoram Gross Film Studio. Through his films, Gross was clearly someone who hoped to engage the youth of Australia, and the world, with an environmental message that hoped to instil a positive, caring, empathetic life path for them.

Given the over forty year legacy of the film Dot and the Kangaroo, and for Ethel Pedley, who never got to see the impact of her book, one can’t help but hope that there has been a wealth of children (and adults alike who come to these stories later in life) who have had their viewpoint positively changed. Sure, the animation is often rudimentary, and the songs irritate a little more than entertain, but the core message of care and respect for the environment, and the kind and compassionate character of Kangaroo, make this a film that deserves a prime place in Australian film history.

The stories of Yoram Gross, of Ethel Pedley, and of the character of Dot, are all narratives that show a trio of people who have nothing but hope and sympathy for the future of Australia. Hope that there is respect and care given to the environment, but sympathy for the realisation that for the future of Australians, the destructive nature of mankind will mean that as each generation succeeds another generation, there will be less of nature for them to appreciate and admire. If there’s an enduring message in Dot and the Kangaroo that is worth remembering, it is that we are not alone on this planet, and that there is a whole ecosystem that exists outside of our four walled, neon lit environments that we call work and home. If only those in power could remember this more often. 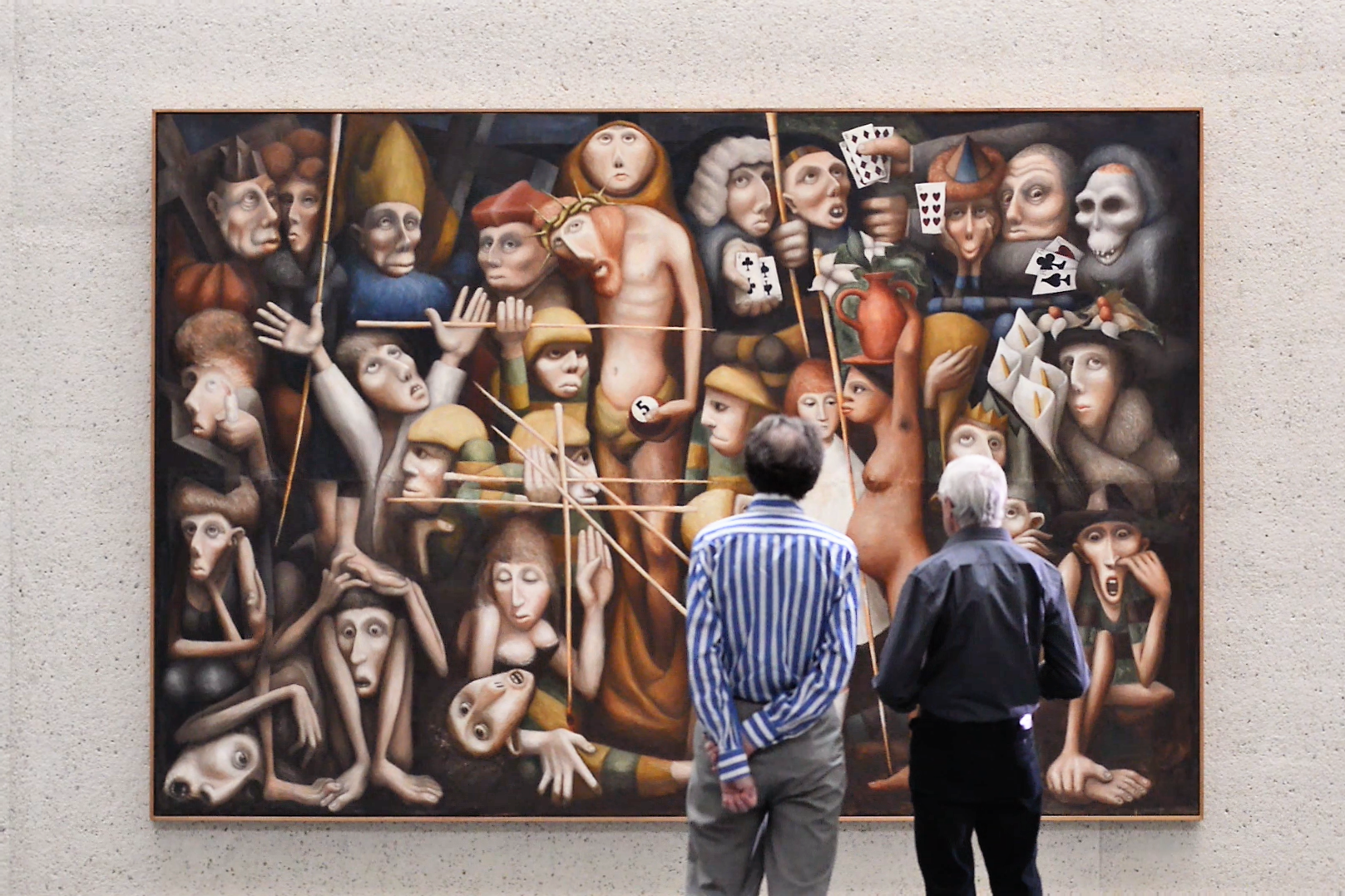