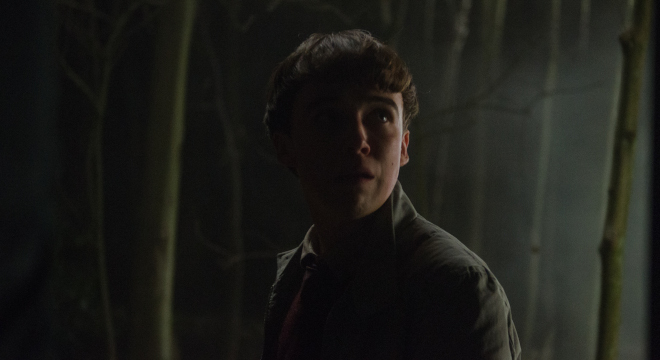 After an irrelevant childhood focused opening, Ghost Stories kicks into its narrative with obnoxious sceptic Professor Phillip Goodman (co-director Andy Nyman) interrupting a psychics attempt to (falsely) reunite the spirit of a deceased son with the distraught mother in the audience. Goodman is the host of a ‘gotcha’ style TV show that aims to expose frauds, especially those working in the realm of the paranormal, with Goodman intending to carry on the legacy of long missing paranormal investigator, Charles Cameron (Leonard Byrne).  However, uber-Charles Cameron-fanboy Goodman receives an invitation out of the blue from the long lost investigator. Goodman trundles off to meet up with Cameron, who rails against Phillip for being so ignorant to see that maybe people need psychics to help them heal. Cameron demands Goodman investigate the three cases that he couldn’t solve, and in turn, we have a set of ghost stories that make up a film.

Written and directed by the duo of Jeremy Dyson and Andy Nyman, Ghost Stories is, quite simply, a bit of a mess. It really wants to be an anthology film that’s held together by some kind of tentative thread, but instead it comes across as being a mish-mash of ideas that simply just, well, hang there in a field of atmosphere. One story has a security guard being haunted by something in a rundown warehouse. Another has a teen driving down a dark road in his parents car that he shouldn’t be driving, and hitting a beast in the darkness. And the last story has a soon-to-be father being haunted in the nursery set up for the imminent child. It’s all very wishy-washy and vague.

However, with all of its flaws, Ghost Stories is mildly entertaining.

In a world of over explained monsters and ghosts (with ghosts that appear in other ghosts stories getting their own backstory filled film – here’s looking at you The Nun), it’s nice to see a film embrace vagueness and ambiguity return to the realm of ghost stories. But, a little ambiguity goes a long way, and unfortunately for Ghost Stories, this film is positively drenched in ambiguity. The narrative would barely fit on a napkin, even with all the flourishes that Dyson and Nyman fill up the running time with. For ambiguity and vagueness to work effectively, the string pullers behind the scenes need to know more than the audience ever will – they need to know the backstory of the ghost to help inform the scare. Instead, Dyson and Nyman rely mostly on creepy imagery rather than anything else. It’s like a horror focused Tumblr page thrown up on the big screen.

As this is a horror film – a very, very British one at that – one expects shocks and frights. And, sure enough, there are a few of them. Granted, they’re not very inventive shocks and frights, as they mostly come from the ‘loud quiet loud’ toolbox. You know that that guy walking down the dark corridor will turn around to see someone standing there, and then a loud shriek of the violins will wail on the soundtrack, and then there’ll be silence. Jumps are rote and expected, but the fright still manages to work.

Once the three stories are dealt with, the film decides to go into a reality breaking climax which is visually intriguing, but again, is simply monopolising on creepy visuals rather than anything else. It’s all a bit scattered, like the toolbox of tricks has been spilled everywhere and Dyson and Nyman feel they need to use every single one of them just once. It’s equally too much and not enough.

Finke: There and Back Review – Free Solo by Way of Mad Max Fury Road, a Must See

Actors are fine, with Martin Freeman, Paul Whitehouse, and Alex Lawther doing a solid job. Andy Nyman feels miscast, with his Professor figure being more grating than interesting. For some reason, there is a distinct lack of women in the film. This is very much a male only affair, which is even stranger given it has no narrative purpose to be so.

Overall, Ghost Stories is serviceable fun. It’s good enough when you’re with it, but there’s little that will linger in your mind other than Alex Lawther’s pitch perfect line reading of ‘fuck that’.