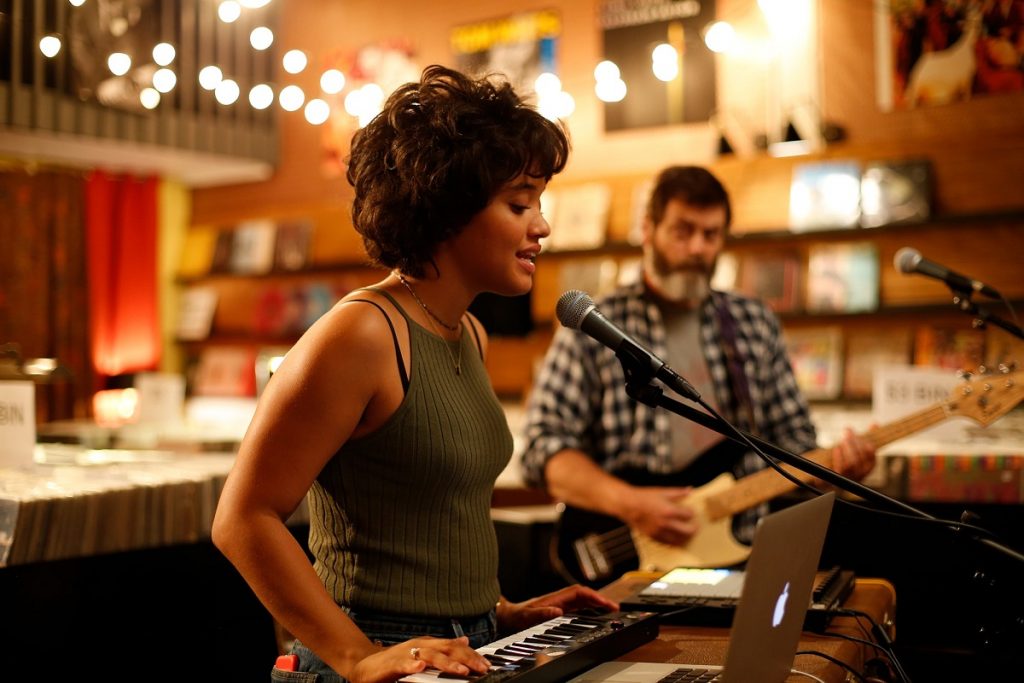 Hearts Beat Loud is chicken soup for the soul. It’s a beautiful, warm hug on a cold winters day, breaking through the dreariness and bringing the sunshine in. It’s a film that knows the power of the Nick Offerman smile, and employs it with great efficiency. It’s a celebration of family, love, life, and music. It’s the unkickable puppy.

Director Brett Haley teams up with co-writer Marc Basch (both having worked on Haley’s previous directorial effort, The Hero), and together they weave the tale of father and daughter duo (Nick Offerman and Kiersey Clemons respectively) and their relationship as they make music and grow together. Offerman’s Frank Fisher runs a record store that’s on its last legs. Clemons’ Sam Fisher is on the cusp of heading to college to study medicine. The two share a love of music, and to bond and pass the time, they jam. One night, Frank drags Sam away from studying to play a few tunes together, and a song – the titular Hearts Beat Loud – is born. Buoyed by the electricity the two shared together, Frank tries to encourage Sam to start a band together, at which she shuts him down saying, ‘we’re not a band’. Low and behold, Frank employs that phrase as a band name and whisks Hearts Beat Loud onto Spotify the following day. It – inevitably, as it’s a damn good song – becomes a success. Then, the plot doesn’t go where you think it will.

There’s been a minor revival of music-centric films over the past decade, mainly thanks to the work of John Carney (the triptych of Once, Sing Street, Begin Again combine together perfectly in harmony). While not full blown musicals, these films are inherently crowd pleasing affairs, with great songs peppered throughout the day to day dramas of life. Hearts Beat Loud subverts the well worn ‘Carney-music-dramedy’ mould by focusing on a father/daughter dynamic, rather than a couple falling in love.

There’s little in the way of conflict between Frank and Sam outside of mere routine life issues. This lack of conflict is thanks to the separate life journey’s that both Frank and Sam want to embark on. Sure, Frank could try and keep his record store going, especially with the possible lifeline that landlord Leslie (an always appreciated Toni Collette) throws out to him, but after running the joint for seventeen years, he’s exhausted and in need of something new. When Hearts Beat Loud becomes a surprise entry on the ‘best of indie music’ playlist on Spotify, that ‘something new’ feels like it’s presented itself in the form of a band. Yet, as the more adult of the two, Sam realises that this could simply just be a flash in the pan, and the most logical path for her forward is to follow her academic future.

This is what’s most refreshing about Hearts Beat Loud – it recognises the value of dreams, but it also recognises the need to live a life outside of those dreams. If anything, it’s about people embracing a hobby, doing that hobby well, and then continuing on with their life. While challenges exist, it’s a salient reminder that in this hectic, mad world, we all need to take a moment to recharge and enjoy small things – whether that’s a nice bottle of ‘the good stuff’, or just enjoying a jam session with your kid, taking that moment to chill and do something for you is something that we all need to take note of.

It’s both hard to spoil and hard to talk about Hearts Beat Loud as it’s a film that works so darn well when you’re sitting with it. There’s a unique harmony that comes from the pitch perfect casting of Nick Offerman, Kiersey Clemons, Toni Collette, Ted Danson, Blythe Danner, and Sasha Lane. They blend together so well, creating a supremely comfortable, calming vibe throughout the film. Most notable is the romance that Clemons and Lane fall into. It’s great to see Sasha Lane forging a great career after she exploded on the screen with the superb American Honey, and the same can be said for Kiersey Clemons after her breakout role in Dope. When seasoned and new performers combined, they help make Hearts Beat Loud into a harmless, charming effort that just makes you smile.

The supreme smile creator Nick Offerman does a superb job of just making you feel good, especially when he giggles that trademark giggle that makes the whole cinema breath in comfort, leaving them feeling slightly light headed. The chemistry that Offerman and Clemons have together that leaves the genuine impression that these two people have grown up together, with Frank shaping Sam’s life into someone who can head off to college to study medicine. The learned shorthand the two have together is something that can easily feel fake, but here it’s natural, almost symbiotic, as any great band that works together should be.

And you’ll damn well want to pick up the soundtrack too. Keegan DeWitt wrote the songs and the score and his effort is wonderfully realised through the brilliant vocals that both Offerman and Clemons provide. Each new song that is revealed as the plot develops feels natural, and far removed from the cynical view that they’re simply there to pad out a soundtrack that’s designed for you to pick up as you exit through the gift shop on your way out of the cinema.

Hearts Beat Loud is a beautiful, calming experience. A real treat to sit with, carrying a level of authenticity that feels like the exact thing that we need in this ever turbulent world. Let this film wash over you and walk out of the cinema feeling cleansed and like you’ve just had a long, warm hug from your Grandmother.