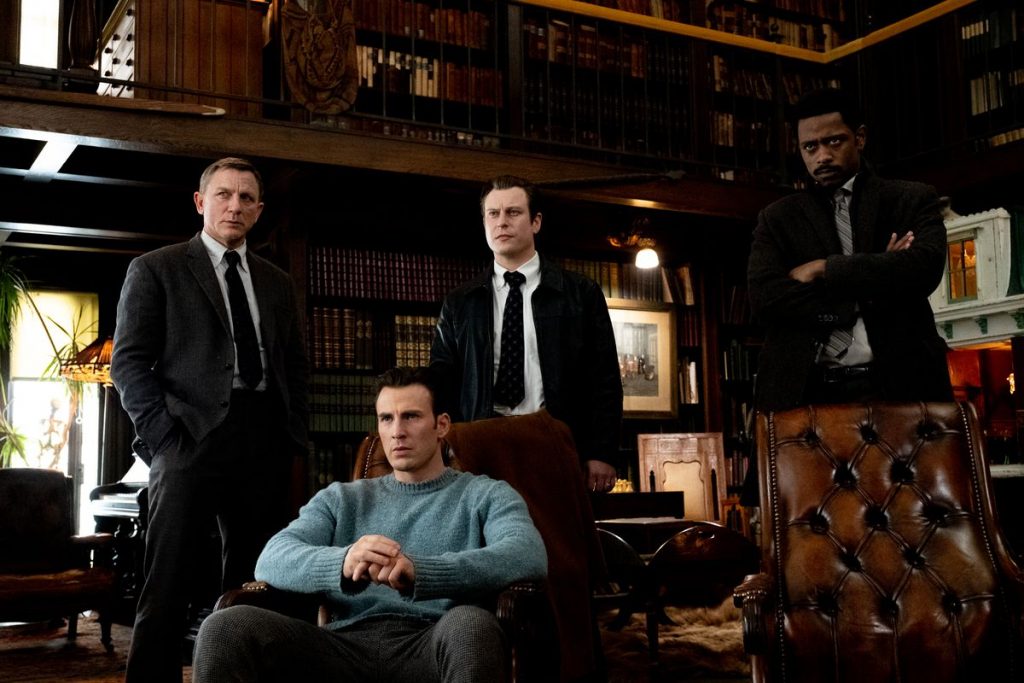 Knives Out Review – A Delicate Tonal Tightrope that Succeeds Immensely

Rian Johnson, beyond whatever you may think of his last film Star Wars: The Last Jedi, is one of the most interesting and different filmmakers working today. Every movie he makes is completely different to the last one, as if he is bound to make every genre fresh and exciting for today’s audiences. He resurrected the harboiled noir, Dashiell Hammett-inspired stories in Brick, gave us unbound and wacky sensibilities to con artists, spun a brand new idea for time travel in Looper, and pushed Star Wars to its ultimate limits, asking unexplored questions and subverting many expectations with The Last Jedi. Now he takes on the whodunnit genre, deeply inspired by Agatha Christie, but puts it directly into today’s world, exploring more than just the fun of solving mystery and murder.

The Thrombey family characters feel completely real and still operate as overt symbols of endless greed, moral corruption, political division, highest-of-high elitism, manipulation of youth, and the complete misunderstanding of immigrants and their struggles in today’s America. Sure, not everyone in the family is a bad person, but they are mostly reserved to let bad things happen to good people if it means they maintain their status and wealth. Each person represents some sin of the United States, as if this was the dark dimension version of Congress, converging and clashing against one another, and caught in the middle is the working class and us the audience.

While each person who plays a member of the Thrombey family does great work and plays them to the best of their respective abilities (particularly having Chris Evans play the total opposite of Captain America), it is Ana de Armas who shines brightest as Marta. She’s the hard-working and kind-hearted caregiver to Harlan who has the most important part to play in all of this. Her performance is utterly riveting, filled with life and love and heartbreak, and every scene I got excited at seeing what she would do next and where her character would go. She is playing the most serious character here, but putting her front and centre pays off in fantastic ways.

On the other side of the coin to Marta’s quiet panic at the situation at hand is the larger-than-life Benoit Blanc, feeling ripped straight from the pages of old murder mystery novels of the 20s, or like a rejected concept for Poirot. Daniel Craig goes all in on this “Kentucky-fried, Foghorn Leghorn drawl” (actual quote from the film) and while it sounds goofy at first, you start to ease yourself into his lively performance that walks the line between making Blanc the smartest in the room or a bit of a goofball, blending the two eventually into a highly memorable performance. I would love to see a series of future films all centred on Blanc just making his way through case after case on sheer luck and coincidence.

Knives Out is a bevy of splendid performances from the actors mentioned, as well as Christopher Plummer still being a legend well into his 80s and Lakeith Stanfield making the best of a rather fleeting role, but it is also a sumptuous visual feast. Steve Yedlin returns in his fourth collaboration with Johnson as cinematographer, giving us some truly spectacular framings of characters, glorious light filling every room or being held back in perfect amounts, and (just like with The Last Jedi) seamlessly blending film with digital. Yedlin is an absolute genius with a camera, and I am always excited at what he has next to offer as an artist.

I’m not exactly sure if the mansion interiors seen in the film are real interiors or studio sets, but the design and decoration from David Crank, Jeremy Woodward, and David Schlesinger is filled to the brim with intricate detail and spectacular originality. Every object in this house, no matter how weird it looks, feels like a part of the story or the characters, as if this is the perfect scenario in which an eccentric mystery writer would live in. Also setting this film in late autumn Massachusetts means that everyone wears such lovely coats, scarves, and knitwear beautifully designed by Jenny Eagan, and I want so many of them for next winter.

I was lucky enough to see Knives Out twice in one weekend before its release date on the 28th and I will say that seeing it twice is a highly beneficial experience. While some of the plot machinations can be a bit heady to completely understand step-by-step, and the members of the Thrombey family played by such great actors are underserved characters in the grand scheme of things, you start to understand what Rian Johnson is trying to say with all of this. The rich and the powerful often do not deserve what they have inherited, not earned, and the exploitation of creativity, young minds, and the work ethic of immigrants is such a depressingly real and powerful theme to explore. Where things go and how they end up, you walk away having had a tonne of fun and learned something about where America is right now.

Knives Out walks a delicate tonal tightrope, and succeeds immensely thanks to fantastic direction, a great script filled with hilarious moments, excellent performances and technical elements, and another great score from Rian Johnson’s own cousin Nathan Johnson. You need to see Knives Out right now and take as many people as you can!