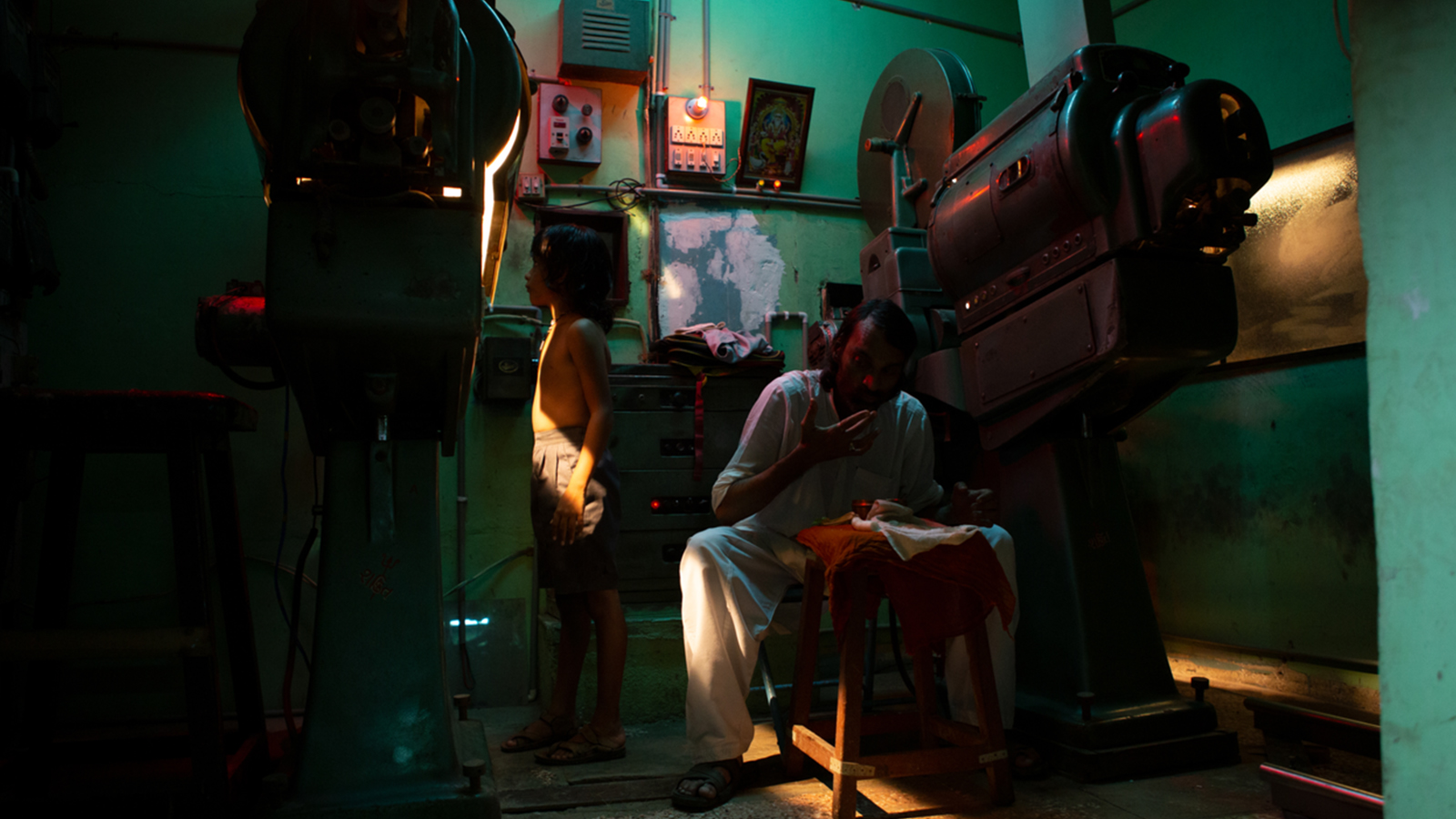 
I had an odd moment of realisation partway through this: that I, an Indian person based in Australia, was watching a film made by an Indian director based in France, that had come to me via a French distributor, all about the rural Indian experience of Indian cinema.

Is that full circle? I can’t tell. Possibly if I was watching it in rural Australia.

Pan Nalin’s latest feature is a meandering ode to the magical power of film, full of exquisite visuals. Set in a tiny town of lush green fields alongside a rail track, the pace is as unhurried aaram se as small town life. Nine year old Samay (played by Bhavin Rabari) is taken to his first film by his father because although the film world is regarded as sleazy by the Brahmin caste to which they belong, this film is religious in nature and therefore acceptable to their values. “This will be your first and your last film,” the father says to little Samay.

It is not his last film. Of course he falls completely in love with the experience and begins a journey that you know will completely transform his life. There’s a beautiful moment when Samay turns his back to the live screen and gazes fixedly at the flickering beam of light from the projectionist window, a visual device that Buster Keaton would love.

He starts to see his world of fields and railway lines differently, using shards or bottles of coloured glass as filters to intensify the passing greenery or distort the perspective down the tracks. Samay is already a natural storyteller — his mother affectionately calls him a liar — fashioning tales from images on discarded matchboxes to an audience of little boys.

A chance sharing of food with a guy who turns out to be the projectionist Fazal lets Samay into the room where the magic happens. It’s a secret place of mystical machinery, coloured in the same vivid shades as those glass filters, the light beams glowing gold dust in the air. Fazal tells him that cinema is the power to tell lies, that it’s also a tool of political propaganda and commercial advertising, a means to enforce class distinctions. But Fazal’s cynicism doesn’t bar him from the joy and play of movies, and the two form a lovely relationship that is neither cloying nor cursory. The actor Bhavesh Shrimali even looks like an adult version of Samay, lean and long-haired.

There’s a great juxtaposition around then of the iconic 2001: A Space Odyssey theme with Bollywood film which should feel hackneyed but doesn’t because this may be the first time I’ve experienced that music paired with visuals of brown people. Maybe.

The opening title of Last Film Show (no “the” and we desis say “fillum”) is an expression of gratitude to the Lumiere brothers, David Lean, Kubrick, Tarkovsky, and Eadweard Muybridge. That last name was wholly unfamiliar to me and sent me down a slight rabbithole of research. I’m glad I did because Samay’s filmmaking journey starts at a similar grappling with the rudimentals of capturing light and the use of slides, evoking an early form of the movie projector invented by Muybridge in the 1870s, a mere twenty years before the Lumiere brothers made their first film.

Using scavenged objects refashioned and repurposed, Samay and his group of friends move from light shows to actual splicing of footage together to screen his own little movies. The script never draws attention to this but there’s a wonderful sense of how a film begins with a solitary person dreaming and at some point becomes a collaboration, needing the efforts of several people to make the story come to light. And then it grows even more elaborate and joyful when the kids use their voices and bodies to add sound and song to image. The film no longer belongs to one person, it is made by and belongs to a community of kids thrilled by creativity.

But the future looms large over a small boy in a small town. While his father is trapped in poverty and caste shame, Samay’s teacher tells him roundly that in this day and age, the only two castes that matter in India are people who speak English and people who don’t. That pierced me to the core, it’s something that was drummed into me from a very young age by my schoolteacher grandmother who was always extremely proud of the fact that all four of her children went to and graduated from college. As Catholics living in a middle-class suburb of Mumbai who spoke English as a first language at home, we had a thousand times more privilege than kids like Samay which made our path through life so much easier and our world so much larger. “Learn English and leave the village,” he’s told and I felt that so hard, the necessity and grief of that advice, even now as I write this review in English.

Samay’s relationship with his dad will be all too familiar, especially to desi kids, in its combative nature. It also makes for a hilarious image of kid running from irate dad in pursuit who in turn is pursued by each member of the small boy gang running in single file across the screen. That father-son relationship turns unexpectedly poignant in the final act which ngl got me quite teary and choked up.

As you would expect from a film about film, the cinematography (by Swapnil S. Sonawane) is on show here. But it’s not irritatingly self-conscious. There is one instance where the scene begins in black and white and bleeds slowly into colour. That felt like the only time the filmmaking drew attention to itself, and I assumed that was a homage to Satyajit Ray whose reputation towers over all non-Bollywood versions of Indian cinema. Otherwise, the photography and design is naturalistic and just stylistic enough to please the visual hedonists among us. The colours of this Indian rural landscape are clean and rich, a lot of fresh green and earthy tones, a very textured aesthetic of crumbly colourful walls and people with unwashed hair and untamed stubble. The choice of solid colours and subtle rather than elaborate patterns for the clothes gives the whole production a sort of vivid elegant coherence.

As visual motifs go, the preparation of food by Samay’s mum works really well on both aesthetic and emotional levels. We desis show love through food, and she makes everything from scratch, grinding the masala even, cooked on the porch in open air, shielded from sunshine and rain. The same colours repeat in each meal — red and orange of the wrapping fabric, the white and green of the radish, the steel and brass of the tiffin containers, and the intense colours of the actual food. Aside from making me very hungry, that repetition seemed like a quietly Indian iconography, replicated from the shades of the landscape.

Despite the meandering pace of this bucolic af film, the final act unleashes a sequence of great emotional power and startling visual beauty. The editing becomes notably fast, to excellent effect, and the Cyrus Morin score turns quite haunting. I might have imagined a reworking of Also Sprach Zarathustra. It’s only then that the story reveals itself to be about the transition of Indian cinema from film stock to digital, and the transmutation of that material into other objects. I won’t spoil what object exactly because the reveal is remarkable on so many levels from visual to symbolic.

As Samay appears in almost every scene, the choice to cast Bhavin Rabari is excellent. His face is beautiful, with a stubborn angular mouth and a classically dimpled chin, totally signalling a fiery disposition. Bhavin’s charisma carries most of the film, and it’s in the final act that his performance gains an emotional range and depth that frankly I didn’t expect and found very affecting.

I’ve made it through this entire review without mentioning Cinema Paradiso (1988) because no doubt there will be umpteen comparisons drawn, for better or worse. In crafting this particular story as he does, Pan Nalin clearly engages in a dialogue of film across race and culture – the two movies would make a deeply interesting double feature.

Art of the Prank Review