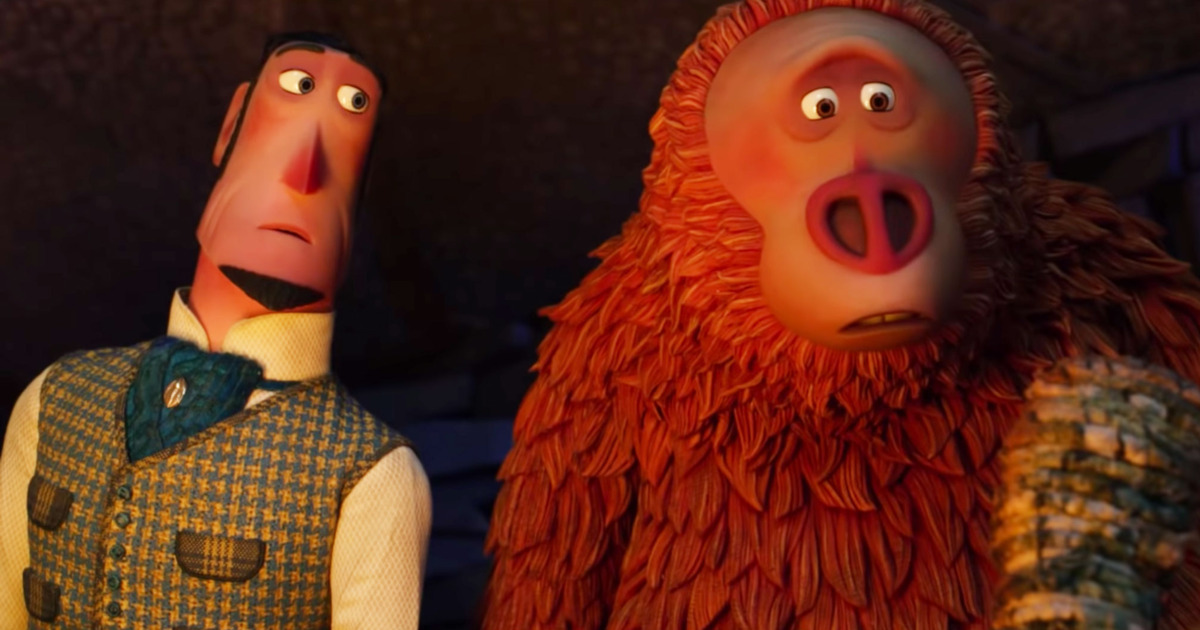 Laika Studios fifth film, Missing Link, is clear evidence of the natural evolution of stop motion animation that made the studio a force to be reckoned with ten years ago with their debut film, Coraline. The art of animation is gloriously realised with Missing Link, with a grand scope of the world being realised via a stunning blend of CGI and stop motion animation. Made over a five year period, this is the story of Mr Link (Zach Galifianakis), a lonely sasquatch who sends a letter to Hugh Jackman’s explorer Sir Lionel Frost, asking for his help in finding his distant relatives, the yeti’s, in a foreign land.

At its core, Missing Link is a film that’s all about identity. Our entry point is Sir Lionel Frost, a man who tirelessly hunts down rare, hidden creatures in the world, like the Loch Ness Monster, all in a bid to be recognised as a genuine explorer by a snooty, bloodthirsty group of privileged men who run an exceptionally exclusive club that is all about celebrating the conquering of others. Blood and bullets are social currency in this group, and Frost yearns to be part of this exclusive club. So when a letter from Mr Link drops in his lap, he sees the confirmed existence of a sasquatch as his ticket into the club, and the path of social approval.

For Mr Link, the yearning for connection with someone similar to him is paramount. While he’s managed to educate himself in solitude thanks to scavenging books and overhearing conversations in the nearby town, the loneliness of being the last of his kind is what pushes him to find more of his kind, and to feel like he has a place in the world. Mr Link initially doesn’t have a name, and it’s Frost who deems him to be ‘Mr Link’, but as their journey carries on together, Mr Link decides on a name that he feels is more suitable. To say what that name is would be to spoil a sweet moment in Missing Link, what I will say is that it’s clear that Mr Link’s choice is a continued affirmation of self-identity, and feeling comfortable in your own skin regardless of what society feels of you.

Adding to this journey is Zoe Saldana’s widower Adelina Forthnight, someone who still lives in the abode that she shared with her adventurer husband, but is now yet to realise the wide open road that lays ahead of her. Saldana as Adelina creates a wonderful energy that helps create a superb character, who, alongside Galifianakis’ superb voice work for Mr Link, brings the life and vibrancy that Missing Link clearly needs more of. Unfortunately, our main protagonist is a pompous, tedious somewhat snooty Brit, who never fully shakes the arrogance of the culture he so desperately wants to be a part of. Jackman’s voice work is fine, but the character is greatly annoying, making me wish that he were out of the picture completely, and that the journey focused solely on Adelina and Mr Link.

As this is an adventure film, of course there has to be some gun toting villains in the mix. The troupe of nefarious foes is lead by scarred Willard Stenk, a usually welcome Timothy Olyphant. Employed to hunt down Frost and co., Stenk is Missing Link’s Jason Statham in Fast and Furious 7 – an enemy that appears whenever the plot demands him to, all the while adding little to the mix, and in turn becoming a weight on the unnecessarily tired plot. Sure, there’s a stunning Inception-esque fight sequence in a ship, but other than that, Stenk feels like a relic of the adventure genre, unnecessarily implemented here due to genre tropes.

Which is where the identity of Laika Studios is brought into question. Their output has continually been off-kilter, somewhat darker fare for kids films. Coraline remains, possibly, the most pure of Laika Studios creations – a genuine masterpiece of the form that engages and disturbs through its imaginative animation. But, from ParaNorman onwards, there has felt like this internal struggle to maintain that darkness, all the while pairing it with an element of whimsy to bring some kind of lightness to the mix. Understandably, this must be one of the most difficult aspects of creating films for kids – how do you create a drama for kids that is heavy on the dour? The Boxtrolls suffered the most with this pairing, feeling like an overcorrect, and ending up far too far in the realm of the saccharine. And then, Kubo and the Two Strings, while visually stunning, remains a problematic film, with Japanese icons Matthew McConaughey and Charlize Theron voicing two different Japanese characters. There are few laughs within Kubo and the Two Strings, which in itself feels like a course correct towards the Coraline-side of things.

Which brings us to Missing Link, a film that does work, but in a very middle ground fare way. The narrative appears new on the surface, but is really no different than the many adventure films that come before it – which in itself isn’t a problem, it’s just a little tedious when well-worn tropes are brought out again and again just because it’s what the genre demands. Laika’s blend of darkness and whimsy is executed wonderfully within Missing Link, which may sound like a compliment, but instead works to the detriment of the film, making it feel all too similar to much of the kid-focused fare out there in the world.

Five years is a long time to create a film, and when one is as labour intensive as a stop motion animation, you are immediately reminded how difficult it is to change course as the production moves along. For Missing Link, I’m not sure even a mid-production course change would have made this a more exciting, invigorating film. It simply is what it is – a visually stunning, narratively bereft adventure film.