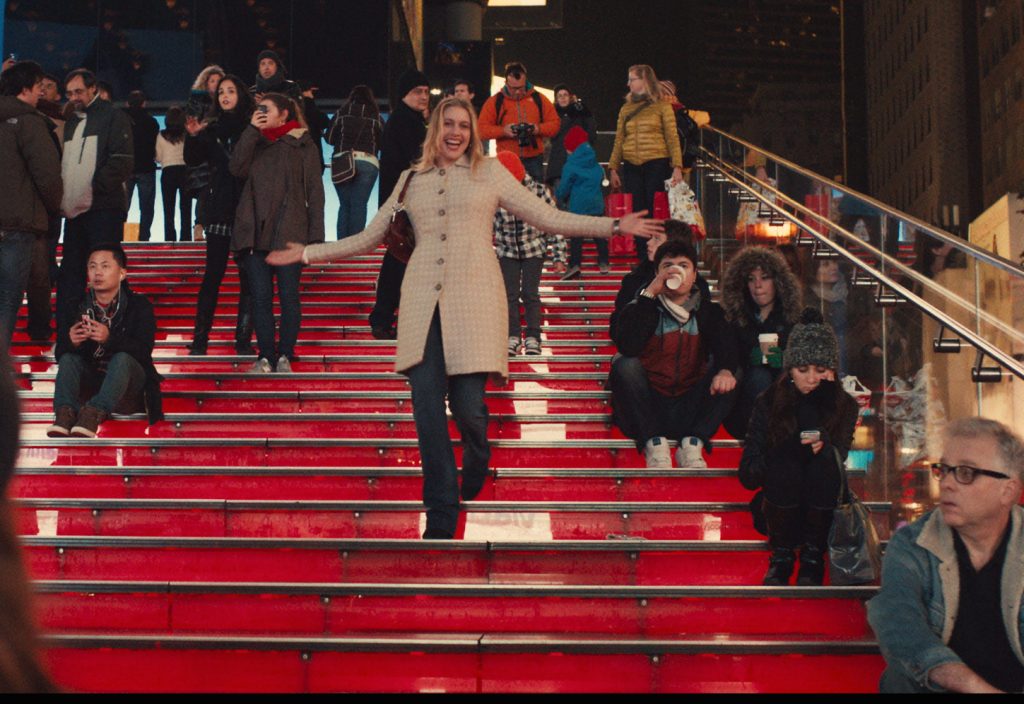 Indie film ingénue Greta Gerwig once again teams up with indie film director (and current husband) Noah Baumbach in Mistress America. Gerwig stars as Brooke, the soon-to-be sister-in-law of Lola Kirke’s Tracy. Brooke’s father and Tracy’s mother are soon to be wed, and from Tracy’s mother’s suggestion, the two meet up and a ‘friendship’ spawns.

Lola Kirke’s Tracy is in her first year of college, and as a teenager growing into a young woman, she is still finding her place in the world. In the opening moments of Mistress America we see Tracy try to settle in with the world around her. She tries to join a writing group and fails. She tries to impress a boy (Tony, played by Matthew Shear) and seemingly lacks that extra effort to make him her boyfriend. In a bid to try and find her footing in the world, she decides to get in touch with Brooke – someone who is older than her, someone who surely has her life together by this point.

With the character of Brooke, Mistress America sets itself apart from other Noah Baumbach hipster-pieces with its intriguing contradiction of a character. Brooke is an exceptionally optimistic and outwardly vibrant person, she’s almost the anti-Frances Halladay in Frances Ha – almost. Brooke is a New Yorker who’s still excited by Times Square. Her constant amazement at the world around her is a brilliant look at the generation of people who sees only good in the world. She is someone who expects the world to service her.

Brooke flatly refuses to co-operate with the world by pulling her own weight, and it’s with this characters reluctance to get an education, to work with people to create her own opportunities, that makes her an interesting character. However, Kirke’s Tracy is more of a conduit for the audience to experience Brooke. Whilst we understand that without any action on Tracy’s behalf, she too could end up just like Brooke, she lacks any major narrative pull to make her interesting enough to care about. Yes, the moments where Tracy is critical of Brooke makes for some nice character conflicts, but it’s over too soon and discarded in place of an extended sequence at a house in Connecticut.

It’s thanks to this extended sojourn at an ex-boyfriend of Brooke’s house that the film really treads water and becomes exceptionally bland and frustrating. It’s obvious that just like Frances Ha and While We’re Young, what Baumbach is trying to do with Mistress America is create a detailed assessment of hipster culture. Yet, where that assessment felt new and interesting in the great Frances Ha where Gerwig’s naïve Frances was a joy to watch as she stumbled through life, dealing with its difficulties with a smile on her face, the similar character displayed here (Brooke) has turned tired and bland. All too similar themes are explored here as in While We’re Young and unfortunately in many ways it simply feels like an excessive re-tread of that films plot.

Without a doubt, Mistress America is one of the longest eighty minute films you’ll see from 2015. The aforementioned trip to the ex-boyfriends house seems to take up about forty minutes of running time. Baumbach appears to be trying to stretch his absurdist comedy muscles here as the house turns into a literal stage for Brooke to sell her unoriginal ideas, only to have one of the other characters literally pay her to not execute the idea because it would be an immediate failure. This sequence alone should have been cut down to ten minutes alone. In fact, if there were a lot more editing with the film, it would have made a really great fifty minute ‘short’ film.

Brooke is a character who loves ignorance – she talks about herself (and to an extent, her generation) as if she’s ‘the Last Cowboy’. When she proposes a restaurant named ‘Moms’ which is part restaurant, part education centre, part hairdresser, she remains ignorant of the blatant health regulations that would stop that occurring. She’s a character who’s in love with ideas, but lacks the financial backing and intelligence to pull it off – her never seen ‘boyfriend’ Stavros is putting up the money for this restaurant, but putting it under Brooke’s name so ‘she can feel as if she’s got a stake in the business’. It’s this ‘take take take’ with no real effort put in from Brooke’s side – besides being an outwardly happy person – that forms the basis of her character. She’s oblivious to the hurt/upset that she can cause – as is seen in a great scene where an old acquaintance confronts Brooke regarding the bullying she suffered at school.

An interesting sidenote is that Tracy calls her mum by her first name – yet loves the idea of this restaurant called ‘Moms’ because it seems like such a warm idea. The notion that the comfort in nostalgia is embraced more than the values that nostalgia represent is interesting and it’s only marginally explored here. These characters – just like the ‘hipsters’ Mistress America is trying to embody, and in turn, ‘take down’ – want all of the warmth and happiness that they feel used to exist in the world, but aren’t willing to put the effort in to obtain it.

Whilst I did find that there was a lot to digest within Mistress America, in the realm of Noah Baumbach’s recent filmography, it doesn’t say enough that’s new or unique. Mistress America is the more tolerable and digestible film over the turgid While We’re Young, both covering very similar ideas and themes. As a companion film to Frances Ha it could possibly have merits as a study of the twenty-something New York hipster, however even then it is mired in long unnecessary and repetitive sequences. Overall, the two core performances from Lola Kirke and Greta Gerwig are interesting enough to make it watchable, yet, not enough to make me hope that for Baumbach’s next film he casts someone other than current beau Gerwig.

(It’s worthwhile noting that whilst the amount of films in Baumbach’s filmography that I don’t like certainly outweigh those that I do like, the quality of those films I do like has me watching every one of his films because of the chance that the next one will be great.)