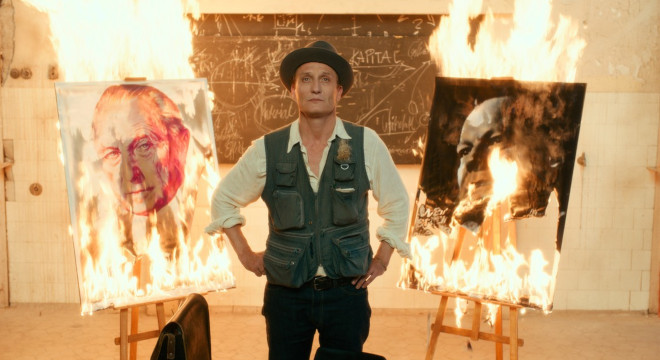 Never Look Away Review – Finding the Beauty in the Truth

Florian Henckel von Donnersmarck’s Never Look Away borrows the life of artist Gerhard Richter and supplants it into the life of Kurt Barnert. The film opens with a young Kurt (Cai Cohrs) being taken on a tour of a “Degenerate Art” exhibition in Nazi era Dresden by his aunt Elisabeth May (Saskia Rosendahl). There, he witnesses the sculpture Girl with Blue Hair by Eugen Hoffmann, and is transfixed. At the exhibition, Elisabeth tells Kurt to ‘never look away’, instilling in him an ethos that would carry through him into his adult life. And it’s as an adult as an art student in Dresden that Kurt finesses his skills as an artist, creating propaganda for the working class. This is an exhaustive film, one that finds value in every single minute of its 188 minute screen time, with a wealth of narrative threads that weave into one another in devastating ways, but Never Look Away is quite simply one of the finest films of the year.

While it’s become an easy crutch for filmmakers to lean of the inherent tragedy of Nazi-era Germany, often monopolising images of concentration camps and the horrendous scale of death and trauma that came with the Nazi mentality, it takes someone as masterful as von Donnersmarck to pare back that imagery and assess it from a different perspective. The concern of ‘holocaust fatigue’ seeping further into society is fully realised here. While the imagery and relevance of the Holocaust is (and always will be) relevant, it’s concerning that with the reliance on this imagery many may forget or be unaware of the path that lead to an event like the Holocaust occurring.

The masterstroke of Florian Henckel von Donnersmarck’s writing and direction is that he understands completely the need for the audience to be quietly informed of the thematic elements of his story via an engaging, powerful narrative. When Elisabeth May is taken away to a hospital because she is suspected to have schizophrenia, von Donnersmarck presents her plight as a way of illuminating the horrendous acts of eugenics that took place by the SS medical corp. Saskia Rosendahl is stunning in a small role, providing the initial emotional ballast that helps guide Never Look Away through some of its more emotionally devastating moments.

In A.O. Scott’s essential book, Better Living Through Criticism, he suggests that everything is criticism. There is not a divided realm of critics and non-critics, but instead, in our own nuanced ways, we are all critics. In many ways, this is vital to the core ideology of Never Look Away – this is a film that celebrates the power of art, doing so by exploring the concept that every piece of artwork is in response to something. Whether a critical stance against the evolution of anti-Semitism, or a celebration of the beauty of the body of a pregnant woman, Never Look Away reaffirms the integral role art plays in society. Art can – and should – terrify the powerful, causing them to stand still on the spot in shock of being finally witnessed for the tyrannical beings that they actually are. Art with an agenda, or a personal perspective, carries immense value and weight.

But, importantly, art can be misguided and aimless. A journey through an art school in Düsseldorf shows a school full of students searching for a meaning or purpose via art. In a five minute sequence, von Donnersmarck tears down the art world, forcing art to relinquish some of its power and submit to a world of questioning. One artist is a stunning, objectively beautiful woman who slashes blank canvases, who we find out stole the idea from a less attractive woman. Is that slashed canvas now only important because it was slashed by a woman whom society deems to be more attractive than another woman? Elsewhere, a corridor of paint-adorned artists roll their bodies along the floor, leaving imprints of themselves as they move along. The greater purpose of this art is not clearly evident, instead coming across like an attempt to validate the absurd dance routine the artists are embarking on. It’s soon clear that while all art is valuable, not all art is equal.

For the schools teacher, Professor Antonius van Verten (Oliver Masucci), originality is key, a concept that he learns holds little weight as it is less about the format of art, and more about contextualising the items that make up the art work. He refuses to see his students work, strongly suggesting that the realm of portraits and paintings is dead, encouraging them to seek an avenue for their creativity in new, different forms. The slashed canvas has been done, the splattered Pollock-esque painting is tired. van Verten only works with felt and grease, crafting a room of extinguished memories that are valuable to him and him alone. Yet, it is art and his emotional connection to his own story is evident in his creations. In turn, he has applied a context and value to the art utensils of felt and grease.

It’s here that Kurt is reminded of his aunt telling him that ‘everything that is true holds beauty in it’, allowing him to create art that is both true to himself, and true to the horrors of the world that he grew up in. To be precise – there is no beauty in the Holocaust, but for many, aesthetically coherent artwork of torturous imagery allows greater ease of digestion of the subject matter. A painting of a captured Nazi officer carries a wealth of unease and anguish, but through the skill of Kurt’s artistry, there is an invitation to assess and criticise this behemoth of destruction. Art in all its permeations is a form of documentation, a way of cataloguing what has come before, and what may come in the future.

In the sole moment of displaying a gas chamber, von Donnersmarck chooses to show the beauty in the world being extinguished as a woman with downs syndrome is lead into the chamber after telling her captor ‘I like you’. This sequence does not work to diminish the countless Jewish lives that were cruelly taken, but rather, to remind that during the Holocaust those with disabilities or mental health issues were likely to be excised in one way or another from society – a horrific notion that comes with the ominous spectre that is eugenics.

Never Look Away is not without some contrivances. One in particular has Kurt’s girlfriends father being the man who helped hasten his aunts death. Fortunately, the sitcom-esque crassness of this idea has that accent of ludicrousness torn away from it, with von Donnersmarck ensuring to remind of the gravity of every situation. For some, this early moment might be the one that causes some frustration – almost as if von Donnersmarck is trivialising the subject matter that he’s dealing with – and that is a valid feeling. After all, when we approach art, we are approaching it with our own history and understandings of what art should be. As A.O. Scott says, we are all critics, and what works for one person may not work for another.

For this critic, Never Look Away was a profoundly moving experience. The performances from Tom Schilling as adult Kurt Barnert, to Paula Beer as his partner Ellie Seeband, to Sebastian Koch as her father Professor Carl Seeband, are all exemplary, providing a wealth of emotional resonance across the board. In particular, tender moments between Schilling and Beer are the ones that I will remember the longest. In one powerful moment, Kurt lays naked in bed with Ellie, asking her to lay on him so they become one and he can fully realise the embrace of beauty and love that exists between them. On paper, this sounds very light, but it takes a master like von Donnersmarck to portray genuine love and affection properly.

Just like all great art, there is an exhaustive wealth of words to say about Never Look Away; it is a dense, emotional venture that reaffirms the reason why we engage with art. In a modern world where art is continually under attack or undervalued, a film like this acts like a beacon of brilliance, reminding people just why defending, discussing, and creating art is a vital entity within society as a whole.