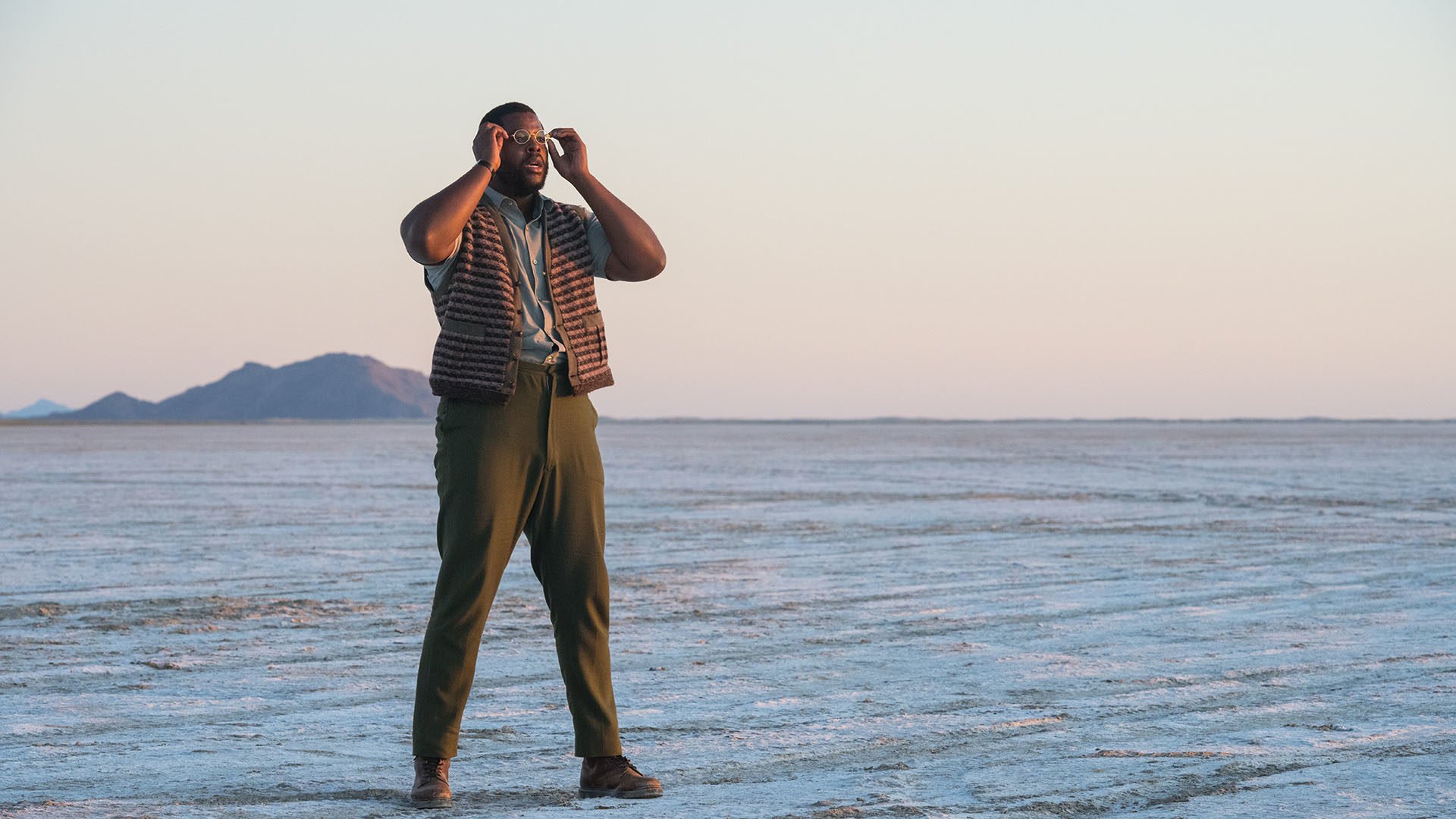 
Written and directed by Edson Oda, Nine Days stars Winston Duke as Will, a man who watches through the eyes of various living persons as an omniscient arbiter. We are introduced to Will as he views two dozen points-of-view on antique television sets stacked on top of each other. He resides in a large standard house one would expect to see as the setting of a family-oriented comedy. Outside is endless desert, with only a few other houses surrounding Will’s, as well as a junk pile. The existence of these things as they are is not fully explained.

Will, and the friendly being Kyo (Benedict Wong), is an eternal guardian of sorts in a kind of afterlife. He watches over these lives and examines what real life is. When a person dies, in this story’s case one of the people Will had grown to care for, then other souls appear at Will’s door, ready to be assessed over nine days as to whether or not they will be granted life in the real world. In the film, this is narrowed down to five candidates, played by Bill Skårsgard, Tony Hale, David Rysdahl, Arianna Ortiz, and Zazie Beetz.

If the candidates are not selected, then they will be peacefully removed from this abstract existence via a “virtual reality” taste of the real world’s elements that they will not live through, such as a beach or riding a bike in springtime. When a final candidate is chosen, they will then inhabit the body of a newborn child, eventually having the personality that has been selected by an arbiter like Will.

Think of Nine Days as the indie-drama version of Pixar’s Soul.

I’ve spent longer than usual in this review explaining what all of this is, and this is because the movie goes out of its way to spend half of its runtime explaining what is going on, without ever giving a good reason why.

Why is it a nine-day assessment by Will and Kyo of the candidate souls? If Will was once a real person, what does that make Kyo? Are there other once-real people acting as soul arbiters in this afterlife? Why does there have to be five potential candidates living through the nine days? How is that days are a measurable factor in this reality and yet no one who has been here has aged? Why are there five possible candidates being assessed over nine days and yet they never (except the final two) interact or inhabit the same space as each other? Will the selected candidate keep the gender and race that we see or will that change? Is there a creator of any kind at work here? Why are watchers viewing lives on VHS tapes through old TVs? Why is there a random junk pile outside?

If we want to keep the Soul comparisons, it doesn’t work in Nine Days’favour. With Soul, we are presented to the world that souls inhabit through animation where we can easily suspend disbelief. What we are seeing is obviously not real, thus we can believe it’s absurdity and mystical nature. Even a reference point for Soul being A Matter of Life and Death still makes “the Other World” a recognisable afterlife.

Nine Days throws you into a unique but totally vague existence and gives most of the characters fragmented or totally alien emotional natures. which makes it hard for an audience to relate to. Then everything is painted over with a soaring Antonio Pinto score resembling emotional grandeur, but the real work towards that climax hasn’t been achieved.

Winston Duke gives a tremendous performance as a broken being filled with pain and regret, balancing grace and power with ease. His final scene with Zazie Beetz is well-performed, but because the movie falls short of giving us a reason to believe their connection, this climax rings hollow.

I love every actor in this movie and I think they all do well making difficult and intentionally underwritten characters work. It’s a great skill of an actor to make even the most mediocre material feel epic and important, beyond whatever tricks the filmmakers pull off. If you can watch a shot of an actor doing their job and believe their performance, then they have succeeded on their own at least.

I had no earthly idea what Nine Days was going in and perhaps that was a mistake. Maybe you should KNOW what even the genre is before viewing the movie, otherwise you will spend half of a 2 hour movie wondering what is going on. Edson Oda as a writer and director is seeking to touch upon issues of emotionality, masculinity, the essence of humanity, the truth of love, and the purpose of belief in an afterlife, but Nine Days just falls short. The setting is unremarkable and having things completely confined to one ordinary house without any major mystical or supernatural element is dull. Perhaps these were budgetary constraints, but other than what we can find in dialogue, Nine Days feels wholly uninterested in telling a larger and more worthy story with its intended themes.