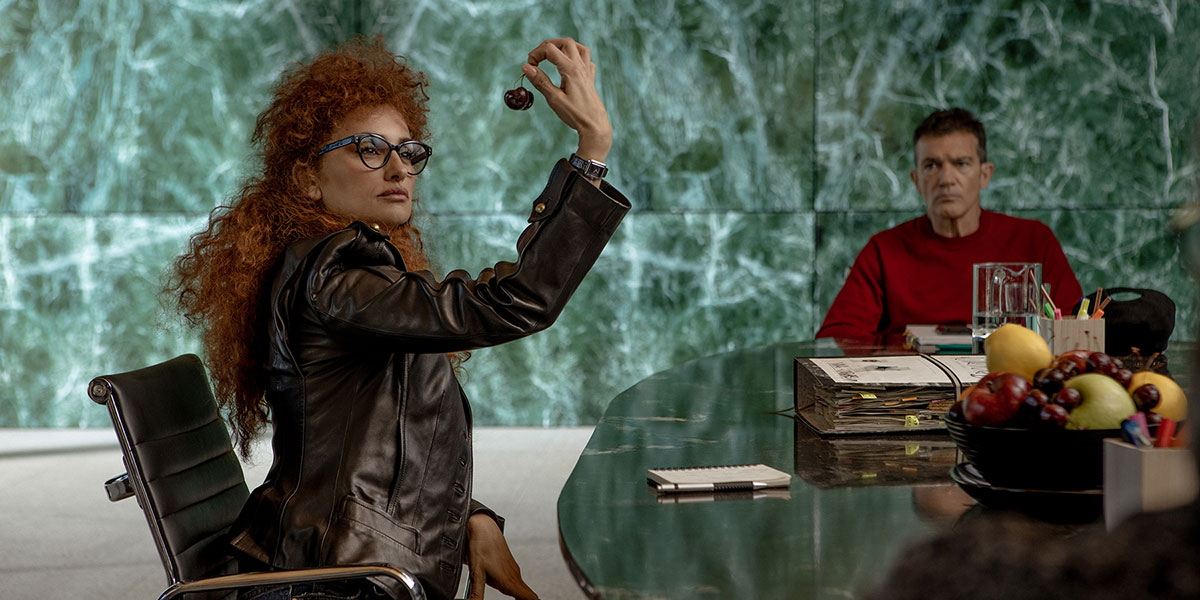 Argentinian directing duo Mariano Cohn and Gastón Duprat take no prisoners in their biting and comical film industry satire, Official Competition. Even the film’s title belies the levels of irony they are reaching with it being a well-known term in the industry for a film considered for awards. It is also the central thesis of the film which breaks down the process of creating a piece of art in a landscape of conflicting egos where the process of collaboration to extract a work is vital but not always achieved.

The film begins with pharmaceutical millionaire Humberto Suárez (José Luis Gómez) marking his eightieth birthday and pondering his legacy. For Suárez it is not enough to be obscenely rich and donating to tax deductible foundations – he wants a permanent monument to his existence. At first he muses on building a bridge in his name and donating it to the government then pivots to the idea that he could make a great film. Of course he knows nothing of the film industry but for a man with unlimited resources this fact is no barrier. He acquires the rights to a Nobel Prize winning novel ‘Rivalry’ and secures the talents of feted independent director Lola Cuevas (Penélope Cruz) to adapt and take control of the project.

Suárez meets with Cuevas to discuss the project. He admits he hasn’t read the novel and Cuevas explains the plot to him (and us). The novel is about two brothers who through family tragedy become embittered. Cohn and Duprat zoom in on Cuevas’ face as she recounts the story, Suárez is spellbound by her narrative, but the directors cut away just as she reaches the final twist of the story. All will be revealed in time which is part of the tension that pushes the plot – how much time do we need to spend before we know how a story ends?

Cuevas is an eccentric visionary and part of her process is to micromanage rehearsals. For the two leads in her film she has chosen two prestigious but diametrically opposed actors. Félix Rivero (Antonio Banderas) is a wildly popular Spanish actor that has made it not only in Europe, but also in Hollywood. He’s a blockbuster star who maintains the lifestyle associated with his position. Iván Torres (Oscar Martínez) is a locally respected method actor who is more concerned with the integrity of the form than he is with perceived universal acclaim. Cuevas is interested in putting these two men in a project because they have never worked together previously. The implication isn’t that the best of these men will rub off on each other, but rather their disparity will ignite precisely the sort of battle of wills that will add verisimilitude to their characters.

From the outset of the nine-day reading and rehearsal it becomes clear that Cuevas’ methods are over the top. From a shot of her script book which looks like it was designed by a demented decoupage obsessed teen, to her insistence that Torres read his opening line (Buenas nochos/Good evening) multiple times to get the exact tone she is after, Cuevas creates an environment that borders on the absurd to begin with and actually reaches that level as the rehearsals persist.

Many tropes of the movie-within-a-movie are present in Official Competition. From the conflicts between actors to the always put-upon assistants who have to facilitate the madness around them. Cohn and Duprat dial these themes up to eleven with a sharp eye that allows for broader comic appeal but also an attention to detail that imbues the work with pathos. In one of Cuevas’ more destructive exercises that she forces the actors to undertake Cohn and Duprat linger on the aftermath by showing the janitor that has to clean up the mess. There are also allusions to nepotism, the casting couch, and other insider issues.

It’s hard to imagine anyone more perfect for the role of a Spanish actor who has made it big in Hollywood than Antonio Banderas. Banderas has clearly observed his environment with a shrewd eye and turns all the ludicrous excesses of an A-lister into a deft comedic performance which balances perfectly with Oscar Martínez’s equally ego-fuelled Torres. The perverse joy Rivero and Torres feel while tormenting each other and their respective methods shines through in how both real-life actors embrace their character’s quirks. Martínez manages to neatly sum up Torres’ hypocrisy as he rehearses in front of a mirror pretending to give a speech refusing a prestigious award – of course he believes he deserves the award but as a matter of artistic integrity and reverence for the art of acting he must decry the culture of awards ceremonies.

Official Competition may at times flirt with being a little too on the nose about the film industry, but its humour is polished and generally the satire is directed in the right places. If a film can be called exuberantly distressing whilst being candidly on-target, Official Competition can rightly claim its laurels.