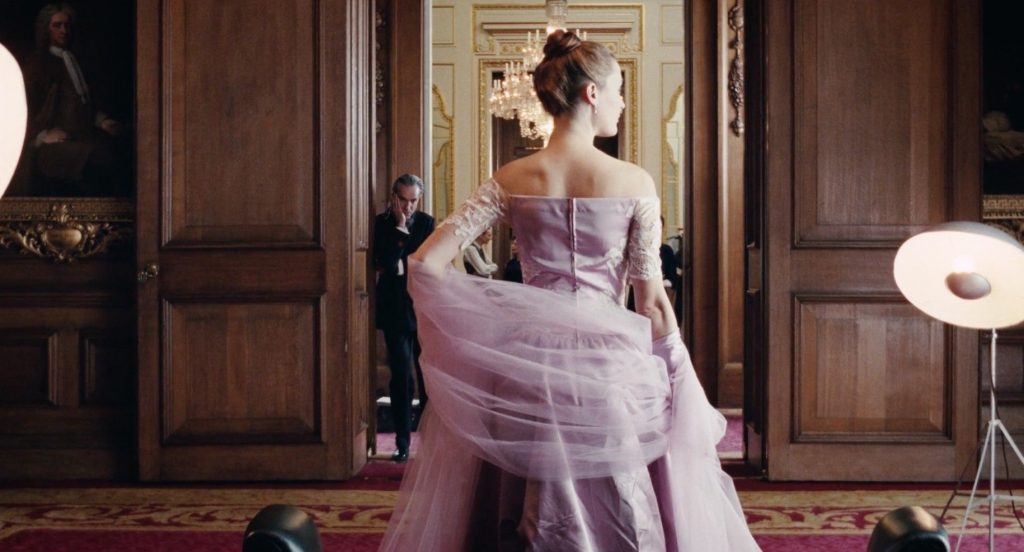 Born from a fever dream, Phantom Thread is the story of a dressmaker falling in love with a waitress. Fairly basic stuff really. It’s also a Paul Thomas Anderson film. And it’s also set in the 1950’s. And it also stars Daniel Day Lewis. And a few relatively unknown actors. And it’s set in England as well. It’s deceptively simple on paper, but just like the hidden memories sewn into the divine dresses, there are curios sequestered everywhere in this stunning film.

Look, I’ll put this out front right away – I’ll be impressed with anybody who can walk away from Phantom Thread knowing exactly what they want to say about it. If you managed to write your review the day of seeing it, then hats off to you. I’m not that good a reviewer, and certainly am not that intelligent to decipher the threads within this story. As someone whose favourite film is Magnolia, I find myself challenged every time Paul Thomas Anderson creates a new masterwork. Both There Will Be Blood and The Master are arguably better films than Magnolia, but for me the finely weaved blanket of characters that covers LA in Magnolia is what holds the ‘favourite film’ banner high. However, I left Phantom Thread feeling shaken and unsure. A question rattled around in my head, is this Paul Thomas Anderson’s best film?

This feels like a miracle of cinema. Like a pure enigma that requests politely to be pondered over, just as long as you keep the sound of your toast and tea down to a quiet hum is all. Paul Thomas Anderson has etched a career in Hollywood as one of the finest modern auteurs, with each new work appearing as another onion that needs to be peeled to understand each layer. Immediately after viewing a new Paul Thomas Anderson film, one can walk out of the cinema confounded, confuses, conflicted and concerned. Confounded over the thematic depths his work plunders. Confused because of the narrative intricacies that will leave your head spinning. And most importantly, conflicted and concerned as you worry that you’ll never see a better film from a living director.

Phantom Thread is as much about the creative process as it is about the people who support the creators. Daniel Day Lewis’ Reynolds Woodcock is a proud designer who lives and thrives thanks to the support he has from a compact house full of women who work tirelessly to help bring his dresses to life. He would like to think that the house operates on his terms, but his sister, Cyril (Lesley Manville), is keen to remind him of his place amongst the hens.

An army of women band together to help amplify the beauty of women, working with the designs that come from the mind of one man. The manufacturing of beauty is a powerful theme to explore, and Anderson allows himself the opportunity to look at the frailty of those who can’t rely on beauty to get by in life. A regular customer who adores Woodcock’s clothing – so much so that her wealth helped afford Woodcock his residence – is cruelly aware of her ageing body. Arriving for a fitting, she reluctantly removes her jewellery slowly. Finally, she holds onto the last item, a pearl earring, with a look of forlorn conclusion – by handing this token away, she is possibly dispensing of her last hope at beauty. This is a short role, but Harriet Sansom Harris delivers it with such immense power and brilliance. Her Barbara Rose is an eternally soused character, who hides behind the three glasses of whatever morning liquor she consumes just to get through the day.

Anderson litters his script with powerful women, and strong, deep characters for his band of actresses to dive into. Lesley Manville (a Mike Leigh regular) is powerful against Daniel Day Lewis, but it’s Vicky Krieps as Woodcock’s new beau, Alma, who is the real revelation here. Arguably, Krieps delivers quite possibly the finest performance in a Paul Thomas Anderson film. She appears at once like a young Julianne Moore, but evolves into this powerful, formidable challenger to Woodcock’s designer genius. There is a self assured confidence that firstly hides behind a nervousness, and then reveals itself over time. Alma suffers no fools, and she’s not afraid to let those around her know about it in her own way. Here’s hoping this is not the last time Anderson works with Vicky Krieps.

Phantom Thread shows the way a relationship bends and curves to each other’s needs. This is a stunning, mature, different film for Paul Thomas Anderson. Swapping the grandeur and mammoth scope of There Will Be Blood and Inherent Vice for the intimate, almost claustrophobic townhouse in Phantom Thread, works to contain an expressive narrative in a way that feels unexpected. Anderson handles lensing duties here, and seeing a film directly from his perspective adds a uniqueness that helps differ this work from his other efforts. His move away from America to tell a suitably non-American story in a non-American manner, works well. You can feel him stretching his creative muscles in a new way.

Look, other people will certainly say a lot smarter things than I’ve said about Phantom Thread elsewhere. I’ll put it bluntly, in a career full of masterpieces, this is another stunning film that confirms Paul Thomas Anderson is the greatest director working today. Time will tell whether this is his best work, but for this humble reviewer and Paul Thomas Anderson fan, my immediate gut reaction is ‘yeah, it darn well is’. See this film.