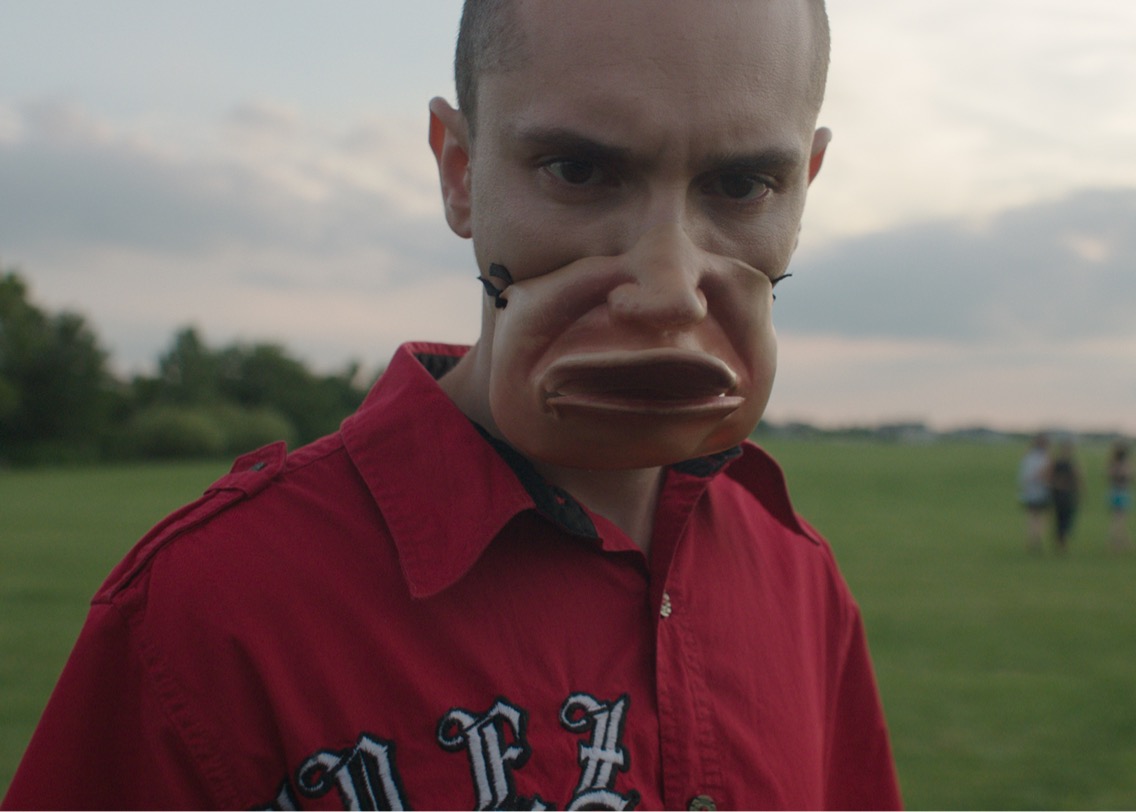 Savage Youth is like someone distilled the joyful, open road youth of American Honey, with the caustic neon drenched vibrancy of Spring Breakers, and dashed in an unhealthy dash of misguided whiteness of Never Goin’ Back, and then smashed it all together to create one of the most brutal takedowns of white America in recent years. Writer/Director Michael Curtis Johnson pulls from real life to tell the disturbing narrative of six despondent youths who are all in their own ways directionless.

Opening with wannabe Insane Clown Posse-make up adorned Jason (Will Brittain) spewing a rap about life, we’re gradually introduced to the troupe of teens whose lives we’ll see unfurl in chaotic, brutal ways. Elena (Grace Victoria Cox) is a wannabe artist who is frequently reminded that her drawings could ‘make her money’, but it’s easier for her to live a life relying on her father’s shit business money (as we’re reminded, he sells manure). Her friend, Stephanie (Chloë Levine), reads off lines from Romeo & Juliet as an ode to the origins of love, only to use her risqué topless selfies as a way of courting her date, Hyde (J. Michael Trautmann). Jason and Hyde’s trio of sub-amateur rappers is completed with their dim, but earnest, friend Lucas (Sasha Feldman). Elsewhere, Gabe (Tequan Richmond) and Mike (Mitchell Edwards) realise their failure at high school has left them little choice but to turn to peddling weed as a way of making money. Across the next 100 minutes, these youths all intertwine with one another, each making mistakes and the world pushes back against them for those mistakes.

Where Andrea Arnold’s American Honey presented a world of youths who were devoid of purpose, travelling the country in search of purpose, with their crimes and misdemeanours almost coming across as inspirational actions, Savage Youth is less lenient on the youth of America. It’s clear from the get go that this group of teens have had opportunities afforded to them – namely, an education – but their lack of applying themselves to further their own future and simply expecting that their ‘talent’ is what will make them a living just underlines how deep their lack of awareness about the demands of life is. Miraculously, Johnson doesn’t ever pull the ‘kids just don’t know how lucky they have it’ card, instead painting each character as fully realised beings, and giving each actor the necessary material to bring these characters to life.

Each performance is pitch perfect, with the film centring on Grace Victoria Cox’s Elena. There’s an eerie likeliness to Evan Rachel Wood, with echoes of Wood’s career creating performance in Thirteen carrying across here. Cox is mesmerising to watch, with her uncanny ability to portray teen love with all its facets – the kind of love that, at that age, your life depends on. In an inspired move, Elena begins the film with electric, vibrant purple hair, and as her life gradually spirals out of control, the dye fades, leaving her with an unkempt, washed out look, her roots all exposed, leaving her true self open to the world.

Will Brittain’s performance as Jason is purely terrifying. His physicality and outward look is militaristic, with a set of dog tags never leaving his neck, and a crew cut hairstyle that feels straight out of Full Metal Jacket. Everybody has done him wrong in some way, and while he talks about how nobody ever gives him a chance, it’s clear that he’s not even giving himself a chance. Jason is a character who gladly takes from the world, with his rapping style clearly being cribbed from black culture, and as the film progresses, it’s painfully clear that there is nothing that Jason won’t do to succeed.

Savage Youth subtly explores the differences between white youth and black youth growing up. When Jason is arrested for breaking into a house, instead of jail time, he’s given the task of writing two essays on films. When Mike is arrested for having an unlicensed gun, he’s given jail time and has a record. His life is ruined. White privilege appears all over Savage Youth, with Johnson ensuring to show how toxic the entitlement of the young white man is when it comes to relationships and ownership of culture. Lucas continually bemoans the fact that no girl is interested in him, but does little to actually endear himself to anyone, living in the misguided view that if he keeps rapping, then surely someone will want him. These white characters don’t fail upwards, but instead, just meander through life being useless vessels for mediocrity. They hang out in drains, drink cheap liquor and smoke crack, and wonder why they’re not moving forward in life.

For Gabe, his weed peddling is a dollar making venture, albeit an illegal one. We’re never sure of how much he applied himself at school, but when his closest friend leaves for college and he’s left behind, he applies what he’s learnt to drugs. As business goes well, he laments that if he were in Colorado, he’d be making bank. But, instead of putting some of those hard earned illegal dollars into making himself a path to get to Colorado, he sticks around and continues to try to make it work in a dead end world.

There’s a lot going on in Savage Youth, and while there is a wealth of negativity being explored, it’s a testament to the direction and actors that these characters are never not engaging. They’re endearing in a toxic way – you can’t help but watch them make mistakes, and yet, outside of Gabe and Mike, you’re never actually wanting these characters to succeed. This may make it sound like they’re unlikeable, or repugnant, but oddly, they’re not. They’re just broken people with no willpower of ever actually building themselves up to be more than what they already are.

Everybody involved with this film is someone to keep an eye on. Savage Youth may not be a pleasant experience as it rolls around to the end, but it’s one that will linger for a long while. As the harsh reminder that this is based on a true story rolls across the screen at the end, you are left shaken by the depths of arrogance and wilful harm that white men will push onto others. This is a fascinating, brilliantly crafted, and timely film, don’t miss this one.