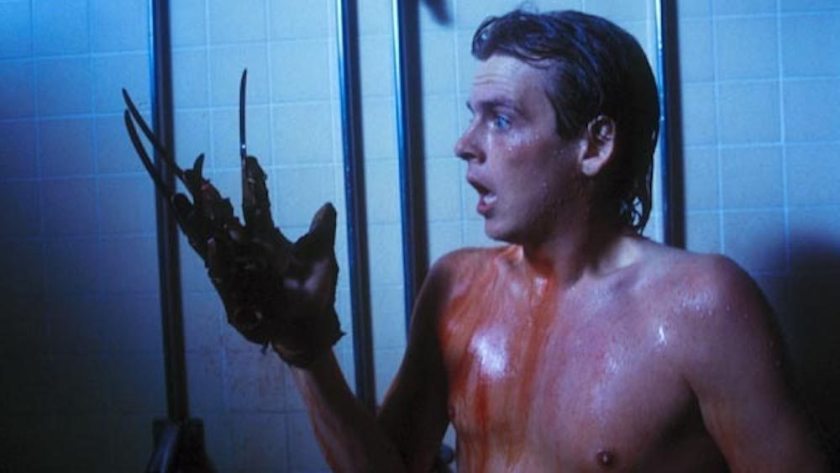 Great documentaries are few and far between. Unlike narrative features, there contains a certain lack of control.  After all, real life does not adhere to a three-act structure, reshoots, or rewrites. So, the great ones not only demand an engaging story (or at least, subject), but also a point of view, plus a dash of terrifically good luck. Given this, it is easy for a documentary to careen sideways into disaster, or worse, bland repetition. Sadly, despite an fascinating starting point, Scream, Queen! My Nightmare on Elm Street, crash lands over and over again into that ugly second category.

It certainly has intriguing subject matter. After all, A Nightmare on Elm Street 2: Freddy’s Revenge is probably the most infamous of the NOES films (and some would argue, the most interesting sequel of any horror franchise). Although personally I am no fan of the film despite recent critical reappraisal, it stands out as a sequel worthy of much discussion because of just how insanely distant it is from the original source material. Instead of being focused on, you know, nightmares, it is more of a possession film. But more memorably, this movie is gay.

Not in the pejorative, insulting definition of gay. But like, really, actually gay. Some may refer to this as “subtext,” but as many interviewees and horror aficionados state in the documentary, it is much closer to actual text. Add on to this that the main subject of Scream, Queen! My Nightmare on Elm Street, and star of the NOES 2, Mark Patton, was a closeted gay man during the time of filming, and you have an excellent introduction to this story.

Most of the film focuses on Patton’s return to a kind of limelight, through not only this film, but his possibly ironic celebration by super fans at horror conventions. Additionally, his overarching mission, for better or worse, seems to be solely focused on confronting writer David Chaskin, who he feels ruined his career through the obvious gay text. This, along with a great deal of social context provided by interviews with horror fans, provides a consistent thorough line for the film to follow. There truly is a great, powerful, moving short documentary hidden somewhere in here. Unfortunately, at about the midway point, it loses a great deal of steam, and the directors (Roman Chimienti and Tyler Jensen) seem painfully aware of this fact.

There are essentially three different stories here, and they struggle mightily to tie them together. As such, their efforts end up in vain. The triple threads of Patton’s struggles, the AIDS crisis in general in the 1980s, and the Nightmare on Elm Street fandom all battle for supremacy and no one wins, least of all the audience. Certainly, Patton as a gay actor in that decade has his struggles linked to watching an entire generation of friends die, and this absolutely should be an impactful connection. Yet, it feels ham-fisted and wedged into a story in which it did not belong. The realisation that Patton’s story is much more interesting and relatable than Patton himself seems to be a large reason for this extra bit of context. Yes, it does make him a bit more of piteous character. But his increasingly bizarre and confrontational behaviour destroys much of the good will built by the film outside of his story.

Honestly, you could make two very interesting documentaries, one about the experience of a closeted gay actor in the 1980s, and another about the intense, powerful fandom of A Nightmare on Elm Street. Patton’s story, on the other hand, would only make an interesting footnote in either the former or the latter.

So, obviously, Scream, Queen! My Nightmare on Elm Street is no classic in the genre of documentaries. It does have some interesting things to briefly discuss about fandom, sexuality, and the cost of fame. But so much is lost in the telling. Gigantic fans of the genre will, of course, be interested in the usually untold story, but will probably get more out of the appearance of Freddy Krueger himself (Robert Englund), gamely discussing the acting choices he made during the original filming, which he manages to do without taking sides. Those moments are not focused on of the heartbreak of Patton, but rather on the craft of filmmaking. These fleeting minutes do show just how charismatic Englund is, and certainly do not help Patton’s lack of said charisma in his own documentary.

But such is the luck of the draw. Chimienti and Jensen chose to follow Patton on this journey, which could have been rewarding, but mainly just ends up circling the drain to an unsatisfying conclusion. And this is oddly fitting, given the movie that started Patton’s story.