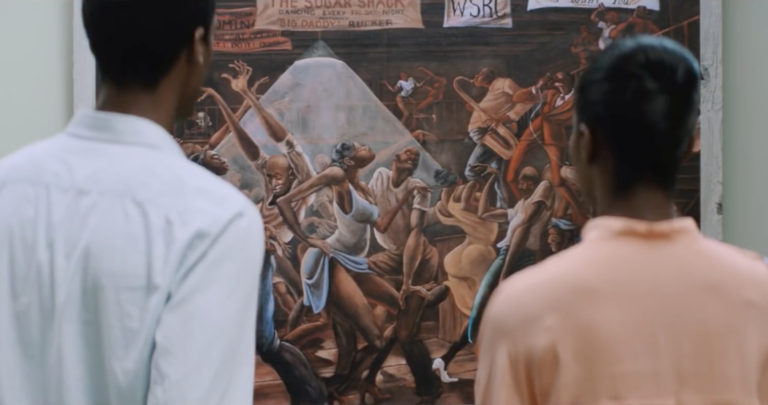 Southside With You Review

Parker Sawyers stars as Barack Obama. Tika Sumpter stars as Michelle Robinson. Of course, we know these two names as those of the first African American couple to take up residence in the White House as President and First Lady. As with Oliver Stone’s film about George Bush, W, Southside With You has arrived near the end of Barack Obama’s presidency. Unlike W, Southside With You is less a film about Obama as a leader, and more about how Obama became set on his path to become a leader. Tanne wrote and directed this universal tale of two people coming together and finding unity in their shared interests.

As Barack drives across town to pick up Michelle for ‘not a date’ in his run down yellow car, we are presented with garish credits and vibrant music – the tone is set. The camera traipses through the neighbourhoods of suburban Chicago, houses are worn down, but the inhabitants are mostly united with people sitting in their yards talking, sharing tales. There is a slight disconnect with the world we’re presented with here and the world that Obama talks about later on. Obama talks about the fear that people have in the world they live in, afraid of the violence on the streets – but that’s not the world we’re shown to begin with.

Many have talked about the similarities between this and Richard Linklater’s Before trilogy – and it’s an unmistakeable comparison where in that trilogy and Southside With You, the two main characters do walk a lot and talk about many different things associated with their lives. However, to dismiss this film as simply being a ‘black’ version of the Before trilogy (that already exists, it’s called Top Five), is to negate the undertone of the exploration of black culture in America within Southside With You.

What Tanne has managed to do is not only provide an exploration into the romance that is Michelle and Barack, but to also provide an exploration of the history of African American culture, and most importantly, how that culture can inform and shape the lives of those it is intended for. Barack’s discussion about the cultural relevance of the art of Ernie Barnes is not only educational to viewers unaware of Barnes work, but informative in its explanation of why, and how, Barnes work was important to the progression of African American culture in the realm of American history. What works so well about these discussions are that they could quite easily have felt like tedious ‘history lessons’ – but instead come across like a perceived notion of what Barack Obama’s ‘date talk’ may be like; informing Michelle of the sort of person he is, and his family history.

The same goes with other discussions about the music of Janet Jackson, and of course, the films of Spike Lee. The fabled viewing of Do the Right Thing on Barack and Michelle’s first date is shown here; its important inclusion necessary to help display that the 1989 Chicago we’re presented with is one on the precipice of revolution, with the LA riots only years away. It’s through the work of Barnes, the music of Janet Jackson, the films of Spike Lee, the degradation and disrespect that African American communities have lived with for decades, that we can further understand and appreciate how someone like Barack Obama can rise up to one day be president.

Granted, this portrayal of the ‘day in the life of young Barack and Michelle’ is, understandably, heavily manufactured. Dialogue is created to fit a purpose, rather than feel natural. Like many other biopics, it’s foolish to think that the events portrayed on screen are as they were on the day itself. Like Ava DuVernay’s film about Martin Luther King Selma, Tanne manages to conjure up a Obama-esque speech that helps display how great an orator Barack Obama is. Thanks to Sawyers ability to imitate Obama’s cadence, it turns into a stirring scene that displays a turn of superb duality. Showing how Obama manages to not only build the spirit of a community through clarity, logic and persuasion, but to also to further how someone as brilliant as Michelle would fall in love with him.

Unlike Ava DuVernay, Richard Tanne is a white man. He has constructed a very good film with great performances from Parker Sawyers and Tika Sumpter, but it’s impossible to not feel that the story of Barack Obama will one day be better told through the eyes of an African American writer/director. This is not entirely a slight on the film itself as it’s a well-made film that portrays a future leader in a positive manner; it’s more that for a leader who provided a voice for many that were voiceless under previous presidencies, it’s disappointing to see the first foray into his story be told by yet another white male.

Southside With You isn’t going to inspire you as much as Obama has managed to do with his speeches and actions, or the ‘Hope’ campaign that helped get him elected. What it will do is provide a nice, neat character study of two inspirational humans that is pleasant to watch. Whether ‘nice and neat’ is enough for you as a viewer is up to you, especially for those looking for something inspirational in this post-Trump world. Just like some of the foundations of African American culture, this is a film that portrays a story that will no doubt be adapted and furthered as time goes on.