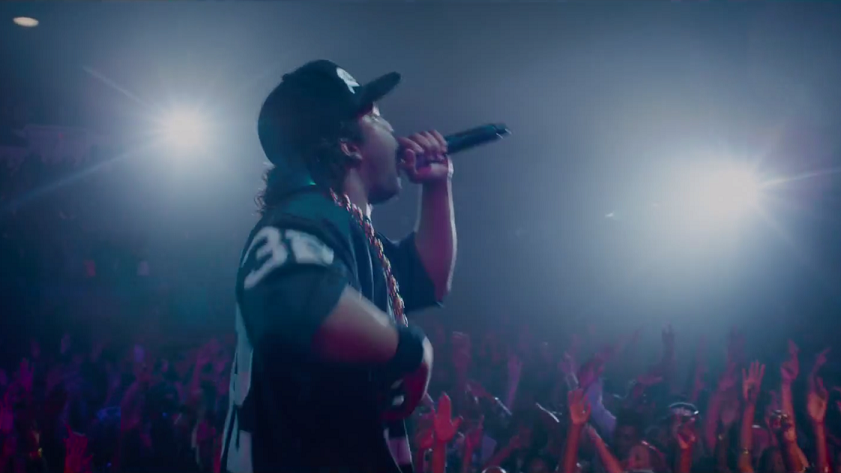 
Like many a white Australian male growing up in the nineties, I liked to think I knew what good rap was. Besides listening to Gangsta’s Paradise and Fuck the Police a lot, it was mostly Public Enemy that I was interested in. That didn’t stop the idea of sitting through a film about NWA sound interesting and exciting.The amount of black band biopics out there is, well, not as many as white band biopics.

The basic plot of Straight Outta Compton is about how Eazy E (Jason Mitchell), Ice Cube (O’Shea Jackson Jr.) and Dr Dre (Corey Hawkins) joined together and created NWA. Fairly straightforward stuff really. Well, over the one hundred and forty seven minute run time, you’ll certainly learn a lot about the creation of NWA and really just how nice these guys are.

Ice Cube, he’s super nice as the main writer of the group who just wants to sign a contract. Eazy-E? He’s a little naive, but his heart is in the right place. Dr Dre, he’s a little bit rougher than the others, but you know that deep down he too is a nice guy. The bad guys though? White cops (every white man that isn’t Paul Giamatti) and Suge Knight (R. Marcos Taylor).

The film opens with Eazy-E going to rob some drug dealers. This quickly goes south and after escaping what looks like a SWAT team, Eazy-E makes his way past a cranky dog and over some rooftops, then he’s on the path straight out of Compton. Given the exceptionally long run time of Straight Outta Compton, it’s a wonder then that the film speeds through the early stages of the formation of NWA and launches into the tracks that fans will know.

And that’s one of Straight Outta Compton’s main strengths, the music. It’s a given that with most music biopic’s, the music is going to be good. But it’s the fact that this is one of the first biopics about rap music that elevates it above that generally ho-hum genre. The explosive Fuck the Police gets a phenomenal concert sequence in Detroit that escalates into a wonderful sequence of the police of Detroit moving through the audience to arrest NWA, then evolves into a full blown riot.

Another sequence has Eazy-E struggling his way through learning his own ability to rap a song. These moments are supported by solid performances from the core leads. It’s no surprise that O’Shea Jackson Jr. looks the part of Ice Cube (he is Ice Cube’s son after all), but it is a surprise that he’s able to hold himself perfectly as a solid performer. Corey Hawkins gives a great amount of humanity and humility to a man who many people nowadays may only know as the guy who created some expensive headphones. Jason Mitchell also superbly displays great qualities of naivety within a man who just wants to do the right thing.

If there is a weak performance, it’s at the surprisingly miscast Paul Giamatti. It’s hard to not compare Giamatti’s performance here with his performance in this years Love & Mercy. In both films, he plays very similar roles. Giamatti is a great actor, but here he feels almost typecast. That’s not to say he doesn’t have any good scenes to perform in.

One of the most impressive and honestly heart breaking scenes is where whilst recording an album, Dr Dre has to attend to his wife who is abandoning him out the front of the recording studio. As she drives off, police pull up and accost him. Eventually the sequence escalates to the point where all members of NWA are on the ground for no apparent reason, the police standing over them like tyrants. Giamatti’s Jerry Heller comes out and says what we’re all thinking – you can’t do this to people just because of the way they look.

It’s these police brutality scenes that work the best within the context of what NWA stand for. The constant oppression that the black American lived through in the late eighties into the early nineties are terrifyingly displayed here with stock footage supplanted into the film to give a sense of time and place. Scenes of the members of NWA watching the Rodney King footage and subsequent court trial give a sense that no matter how much they yell, their actions fall on deaf ears. The sense that nothing will ever change is frightening given the modern day issues in America.

Ignorantly, I had hoped that Straight Outta Compton would hopefully translate the same energy and movement that the eternal classic Do the Right Thing had in the late eighties, but as it is, it’s more interested in telling the story of the men of NWA rather than the story of what their voices meant to a generation. There are great moments here that are unfortunately dragged down but that excessive run time that carries the film into dangerous propaganda territory.

The latter moments of the film with Eazy-E’s HIV diagnosis whilst trying to reunite NWA and his eventual death lose their impact as they are dragged out for melodrama rather than the earned emotional drama that they should have been. This is further sullied by the in film promotion of Dre’s Beats headphones and Ice Cube’s acting career – both were unnecessary inclusions in the film and could have been noted as footnotes rather than be included as the closing moments of the film. What’s even more concerning is that whilst F. Gary Gray does a fine job directing here, his involvement with Ice Cube’s acting career can’t be ignored as he directed Friday.

I can’t help but question myself in regards to the finale of Love & Mercy and Straight Outta Compton’s end moments. Where Love & Mercy ends with Brian Wilson finally being free of his tyrannical ‘manager’ and there is a sense of joy at seeing Wilson performing Smile in front of an audience, Straight Outta Compton’s end credits moments featuring Ice Cube’s acting career and Dr Dre’s sale of Beats by Dre has a false feeling about it. It strikes of in film advertising rather than a well earned moment in the lives of these great artists who came from a bad situation and managed to make something of themselves. Throw in the fine tuned planning of Ice Cube’s son playing him in the film about his life, the hiring of the director who directed Ice Cube’s first film and of course, those headphones, and it’s a disatisfying way to complete an otherwise great film.

As mentioned before, the main crew are displayed as being relatively nice guys with a few rough edges. Of course, doing a bit of research shows that they weren’t always exactly the nicest of folks with domestic violence and assaults on music managers thrown in for good measure. Whilst it’s easy to say that the film shouldn’t have shied away from displaying these terrible acts, I feel that that part of NWA is not what Straight Outta Compton is aiming for. For me, Straight Outta Compton is about what that particular album and what NWA meant for black Americans at that time. Fuck the Police is as timely then as it was now, and if only the film were tightened under two hours then this would be a potent reminder of the power of people when they are oppressed. This is a story about a group of men providing a voice to the disadvantaged.

That’s not to say that there isn’t a place within this story to display the domestic assaults, there could have been, but I believe that would have required a more distanced hand than those of the surviving NWA members. Great performances and great music help carry what is a mostly good music biopic. Here’s a tip – when watching it, disappear once Eazy-E starts to cough, it goes downhill from there.