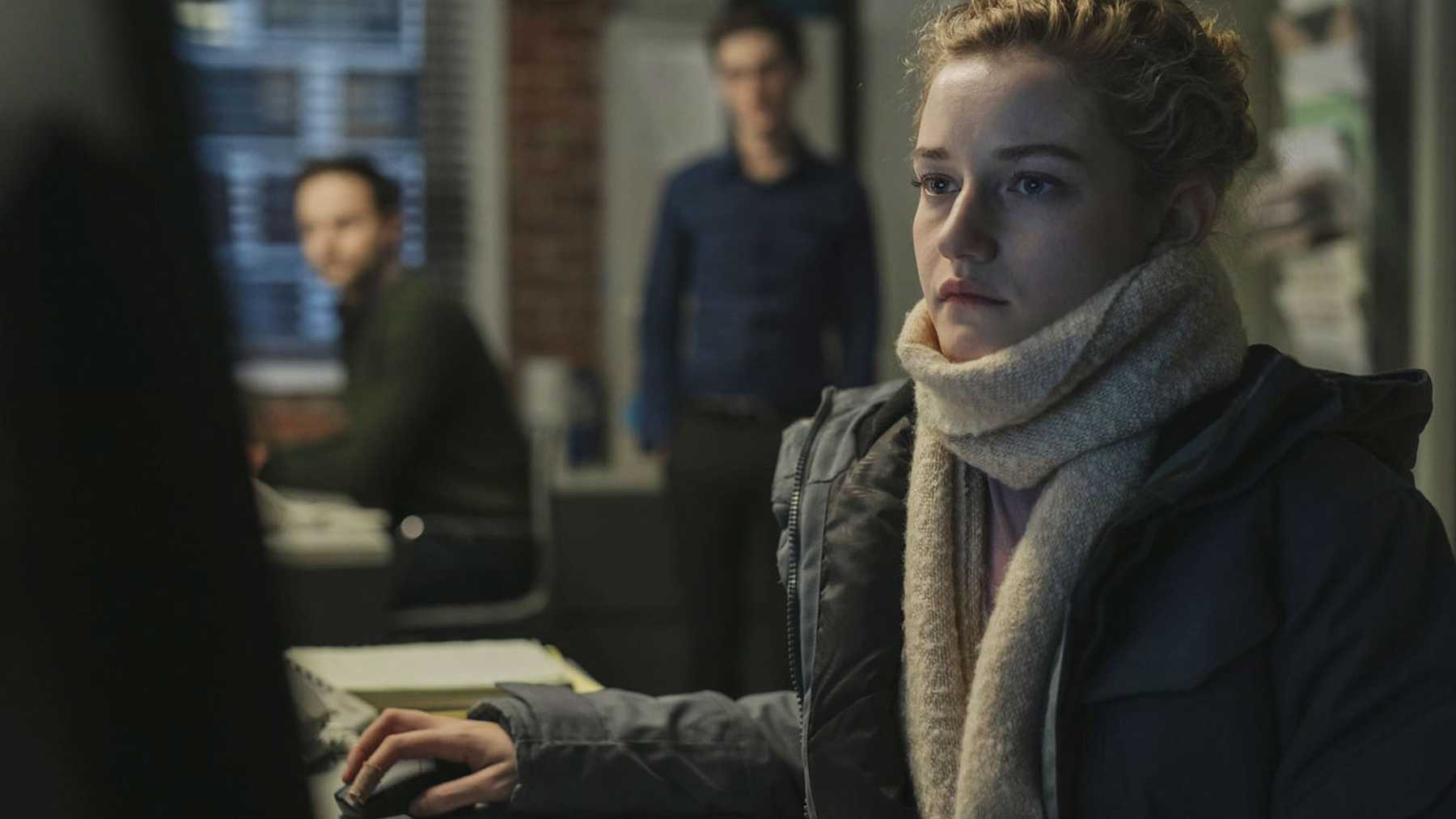 The Assistant Review – A Quiet Film With a Loud Premise

Director and screenwriter Kitty Green’s first foray into the world of fictional filmmaking, The Assistant, is a quiet film with a loud premise about the culture that creates a hostile environment for women working in the entertainment industry.

Jane (Julia Garner) is a young assistant barely above the level of intern working in the New York offices of a company modelled to resemble Miramax. She works tirelessly for a boss simply known as ‘he’ or ‘him’ (voiced by Jay O. Sanders) – an omnipresent, yet absent figure who controls every moment of her existence down to the minutiae of when and how she eats, sleeps and communicates with people outside the office. Although she has only been with the company for five weeks, she is already aware that something is definitely wrong with the culture of the company – something so insidious and all pervasive that almost everyone who works there has become accustomed to it in a manner that is either resigned and dead-eyed, or so ingrained that it’s the subject of constant in-jokes between staff members.

In the case of the two unnamed male assistants (Jon Orsini and Noah Robbins), who work with her in a shared office space outside the bosses office, the amount of time they have spent at the company reflects on their level of tolerance for abusive behaviour from the boss, and in the case of Noah Robbins’ character a willingness to perpetuate that cycle by forcing Jane to deal with the boss’ personal life. From being compelled into taking calls from his frantic wife, to scrubbing down the boss’ office to returning an earring found on the floor near his couch to an unknown woman, Jane’s day is peppered with small acts that degrade her, and by extension, many who work in the film industry.

Some of Jane’s duties seem ordinary for any assistant – she prints out scripts, makes travel bookings, photocopies and delivers schedules and revisions to more senior members of staff. She informs them of the boss’ wishes which become more mercurial over the course of the day. She copies headshots of young actresses and escorts a series of them into the boss’s office, and on to the casting couch. Each action becomes compounded and more sinister as the day drags on and Jane’s stress levels increase with each new phone call, each change of plans and every excuse she has to make for why the boss isn’t in his office or scheduled meetings.

The humiliation Jane undergoes isn’t unique to her. Both male assistants have enough experience with the boss that when Jane is inevitably abused by him for a perceived slight they both know how to write an emailed apology in an almost rote manner. Sharing Jane’s weariness is Max (Alexander Chaplin) and Sasha (Juliana Canfield). However, both Max and Sasha have adjusted, however uncomfortably, to the culture of the office and the boss’ temperament. In a telling scene, Sasha is verbally abused for bringing her children into the office to see the boss despite the fact that he at one point asked her to. The boss’ fury at Sasha leaks out to the outer office where Jane and the two male assistants sit. The audience is only party to some of what is said as Sasha unceremoniously dumps her children into Jane’s arm as she takes a meeting with the boss. A later scene in the bathroom shows Sasha drying her face and staring down Jane in a way that is almost resentful for her being a witness to a moment of weakness.

Being a witness to the revolving casting couch (and jokes about it) is only partially what motivates Jane to make a complaint to the company’s human resources manager. Unbeknownst to Jane, or seemingly anyone else in the office, the boss hires a young and inexperienced waitress/actor Ruby (Mackenzie Leigh) to take up the role of personal assistant. Jane is tasked with taking the young woman to an exclusive hotel where she will be staying whilst working in the office. In the car ride to the hotel Jane gauges that she is young and vulnerable and is essentially being employed as a mistress.

The lynchpin of the film is the scene between Jane and the head of human relations for the company Wilcock (Matthew MacFadyen). At first Wilcock is solicitous, trying to make Jane comfortable. As Jane desperately tries to explain what she is witnessing, Wilcock undermines her. He elicits her complaint from her in a manner that becomes increasingly hostile towards her. He questions why she is carrying out tasks meant for the janitorial staff. Why she is concerned with office rumours. He suggest that because she lives in Astoria in Queens, a mostly industrial and not very desirable neighbourhood, she could be seen as being jealous of Ruby being given the opportunity to stay in a luxury hotel. More than once he references how clever Jane is but makes it clear that she will never reach her goal of becoming a producer unless she toes the line and goes back to work without lodging a formal complaint. As clever as she is, there are hundreds of people lining up for an entry level job with a powerbroker of the magnitude that runs the company. Thusly defeated, Jane demurs and apologises for seeing him. In a chilling parting comment Wilcock tries to reassure her that she has nothing to worry about because she isn’t the boss’ “type”.

Green uses her talent as a documentarian to capture in a relatively small space of time, and limited point of view, an entire culture of abuse. By concentrating the camera almost exclusively on Jane and her reality, the camera creates a subjective space for the character’s experience. The Assistant shows only one day in Jane’s life, yet her interaction with other characters reveals how the position has compromised her and those around her. Green succeeds in capturing how easily people are drawn in and worn down by a noxious culture.

Julia Garner is magnificent as Jane who realises she is sacrificing more than her personal life and relationships, but also all the ethical values she thought she held for a position in a company that one day may pay off for her. The irony is that the film suggests that loyalty to the boss is no guarantee for success as snippets of conversation in the background between other employees seem to imply that that boss has no problem skipping over the company loyal to hire outside talent if it suits him.

For every moment of doubt Jane faces, she is given some kind of vague encouragement that she is doing a good job – whether that be from the boss’ cryptic emails in response to her apologising on his demand, to discussions with her family who tell her that she just needs to stick it out because the opportunity is so great. The audience also palpably feels when Jane starts to exhibit her own set of toxic behaviours as she yells at the boss’ driver; she immediately apologises, but she is slipping into the same patterns that her co-workers display towards each other. The lack of compunction or remorse over dehumanising another in the company is so much the norm that the audience wonders how long the young protagonist will hold out before she no longer cares about anything but her career trajectory.

The structure and feel of the film has an observational cinema flavour. The camera mostly cleaves to Jane and the spaces she inhabits only loosens once she leaves the office. Tight close-ups on Jane’s face convey more of the character’s internal struggle than narrative exposition could. The manner in which the story is told with such intimacy is a testament to both Wells’ skills as a director and Garner’s nuanced performance.

The music by Tamar-kali is only present before she walks into the office and after she leaves, otherwise the sound is completely diegetic. The audience rarely hears or sees more than Jane. Michael Latham’s cinematography further creates the almost documentary effect in the film. Latham is a frequent collaborator with Green, and has worked on her previous films Casting JonBenet and Ukraine Is Not a Brothel.

The Assistant is a remarkable achievement that rests with Kitty Green’s assured hand as director, writer and also co-editor and Garner’s interior and intimate performance. Jane’s very long and tiring day is also exhausting and difficult for the viewer but ultimately extremely rewarding. Green is a director on the rise who has made an engaging film about a subject that much of Hollywood is still somewhat gun shy over.