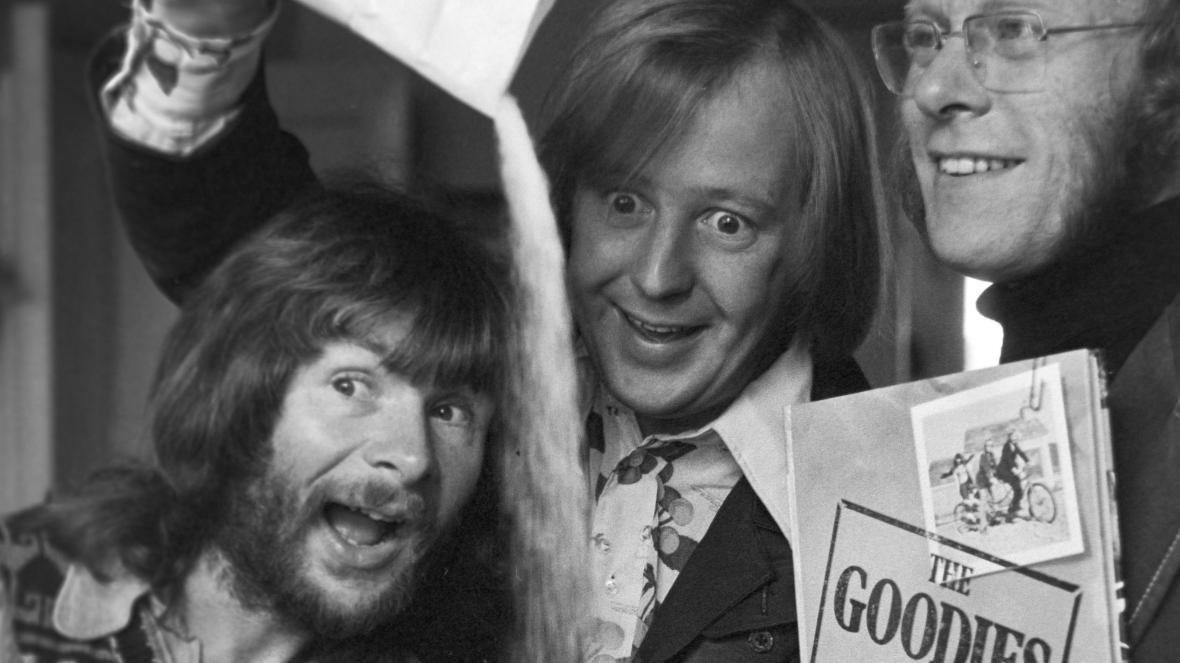 The Goodies: Comedy in a Crisis, and the Loss of Tim Brooke-Taylor

Australians of a certain age would have fond memories of watching The Goodies and Doctor Who in the hour leading up to the ABC’s 7 o’clock news. While the BBC has for many years mined the revenue potential of Doctor Who fans young and old, to the extent of recovering international broadcast tapes and commissioning animations to fill in the gaps caused by the BBC’s archiving policy (or lack of it) before 1978; they have been strangely remiss, if not positively resistant, with marketing home video or DVD for The Goodies.

However, in September 2018 Network brought together (almost) all the BBC episodes (there was one season produced by ITV in 1982) for DVD release. For Australian fans of the series lucky enough to own a region-free DVD player The Goodies: The Complete BBC Collection represents an opportunity to see many episodes for the first time.

Such was the opening of my long gestating, much revised, regularly avoided review of the DVD for the complete BBC seasons of The Goodies, now rudely interrupted by the death of Tim Brooke-Taylor of Covid-19 on Sunday, April 12, 2020.

And while many of the surprises of the collection are in the first and second seasons, many of which did not enter the high-rotation of episodes as part of the Doctor Who double-act, I will not be finishing off the review as planned, but first jump forward to highlight two episodes.

“The End” (season 5, episode 13) and “Earthanasia” (season 7, episode 6) are appropriate in this year of social distancing (or isolation, depending on where in the world you are), and unusual for The Goodies as they take place entirely inside their home office. My recollection from interviews or factoids read in days past is that the single location setting was a budgetary necessity, the team having used most of the budget on the effects, outdoor crew, and props in episodes earlier in the season. Whether or not this was the case, when shorn of these elements we see the sparkling, quick-fire writing of a team that was, at that point, now in middle of their heyday.

Additionally, without the (worthy) distractions of Graeme Garden’s awesome and injury-defying powers of physical comedy, or the musical offerings of Bill Oddie, we are treated to the strength of Tim’s comedic acting.

“Earthanasia” is a roller-coaster of situation comedy. The setup is simple; on Christmas Eve, having considered all the problems facing the earth, the United Nations has decided to get it all over with and end the world at midnight. While Graeme and Bill play to their well-established personas – Graeme basking in his mad scientist achievements and Bill opting to go out with a bonanza of self-indulgence, Tim takes it a bit hard.

From that beginning, we follow Tim’s emotional journey through the last half hour of his (and the earth’s) life, with varying degrees of authentic assistance from Graeme and Bill. This episode is a tour-de-force of Brooke-Taylor with Graeme and Bill ratcheting up the stakes as the time ticks down to midnight, finally and quite inadvertently removing the Union Jack waistcoat repressing Tim’s darkest shame.

Kicking off “The End” is one of Graeme’s schemes; a multi-story property development so exclusive that doors and windows are superfluous. Unfortunately, the first building to be constructed is on the very spot of the trio’s office resulting in it being encased in a giant block of concrete with them on the inside. As the economic state of the nation cancels their planned rescue and shuts down the BBC, they are left with no connection with the outside world.

It all sounds rather topical, doesn’t it?

Panic sets in, with Tim’s iconic “I’m a teapot” leading the way, followed by the asymmetrical ganging-up that It’s Always Sunny in Philadelphia would make its bread-and-butter 30 years later.

“The End” is much more the ensemble piece that “Earthanasia”, but with its theme of enforced isolation, and the resulting scramble for scarce resources (the toilet!), limited access to privacy (also the toilet), fevered hallucinations, the fear of running out of food, and the quest for resilience and hope, make this episode the most applicable to the strange zeitgeist that we have all found ourselves in.

In addition to these two episodes, which have been previously released on DVD, this collection finally offers Australian fans the opportunity to watch almost half of the first two seasons completely fresh. To watch these missed episodes, now 50 years old, and not mixed with recollections of giggling on the lounge room floor is anthropological to say the least.

Like most first seasons TV comedy, even those written by sketch comedy veterans like Graeme, Tim, and Bill, The Goodies took time to find its feet; but one thing already sticks out at this early stage – like Mad Magazine, The Goodies had an unexpected undercurrent of brutal swiftian social satire masquerading as madcap silliness. The social upheavals and cultural touchstones of the late ‘60s and ‘70s are regular inspirations over the show’s whole run, and the first two seasons are already awash in commentary on police violence, the sunset of the British Empire, women’s liberation, pollution, factory farming, and sexual politics.


Binging through the eight seasons and two specials is quite the experience. In addition to seeing where much repeated episodes fall chronologically, the context of clips used in the opening credit sequences, but also absurdist lens through which to view the world of the 1970s.

In addition to episodes unseen there is the opportunity to see episodes in their entirety, and as an adult to see how ‘saucy’ the show was. The Goodies was not created for the early evening timeslot but for the post 9pm watershed audience and it regularly shows in the early seasons.

It’s hard to imagine now but 1970s Australian TV (and society) was quite conservative, Number 96, The Aunty Jack Show, and Gough Whitlam notwithstanding. So here are the unedited versions that fell afoul of the Australian censor. On display, for good(ie) or ill is that stereotypical vein of British humour that brought us Carry On films and Benny Hill, along with the considerable cross-dressing, camp jokes, ridicule of the leering male gaze (paradoxically while also being a product of the male gaze), bare bottoms, and occasional bare breast that it entails.

But the strength of the collection is showing that those favourites which stick in people’s minds and have been joyfully recollected in Facebook posts since news of Tim’s death are dotted throughout its 10-year run. Because, if you were one of those double-act junkies tuning in at 6pm, you can pick a season, any season and there will be at least two episodes and many gags that have joyfully stuck in your memory.

I have to admit that “Earthanasia” and “The End” were not my favourites while I was growing up, but they were memorable. Compared with many episodes they are not as visually engaging for a young audience waiting for Doctor Who to commence, and as an adult not as bitingly satirical. Apart from one gag in “Earthanasia” involving the Royal Family leaving the earth behind by Apollo rocket (the super-rich always have an escape plan) and a brilliant sequence when Graeme explains the truth about The Muppets to Tim, there are practically no cultural or satirical beats in these episodes at all.

But with what Covid-19 has brought us they (accidentally) speak loudly. They also show that Bill, Graeme, and Tim were not reliant on mad-cap antics with the outdoor film unit and giant props set to a rocking soundtrack.

These men had a keen sense of physical comedy and the sight-gag; brilliantly satirical, situation comedians of the “no hugging, no learning” school that people now associate with Larry David and Jerry Seinfeld.

It deeply grieves me that the health crisis that has made these “Earthanasia” and “The End” so relevant has also taken one of the creators from us. I feel as though I have lost an eccentric, slightly disreputable but deeply loved uncle.