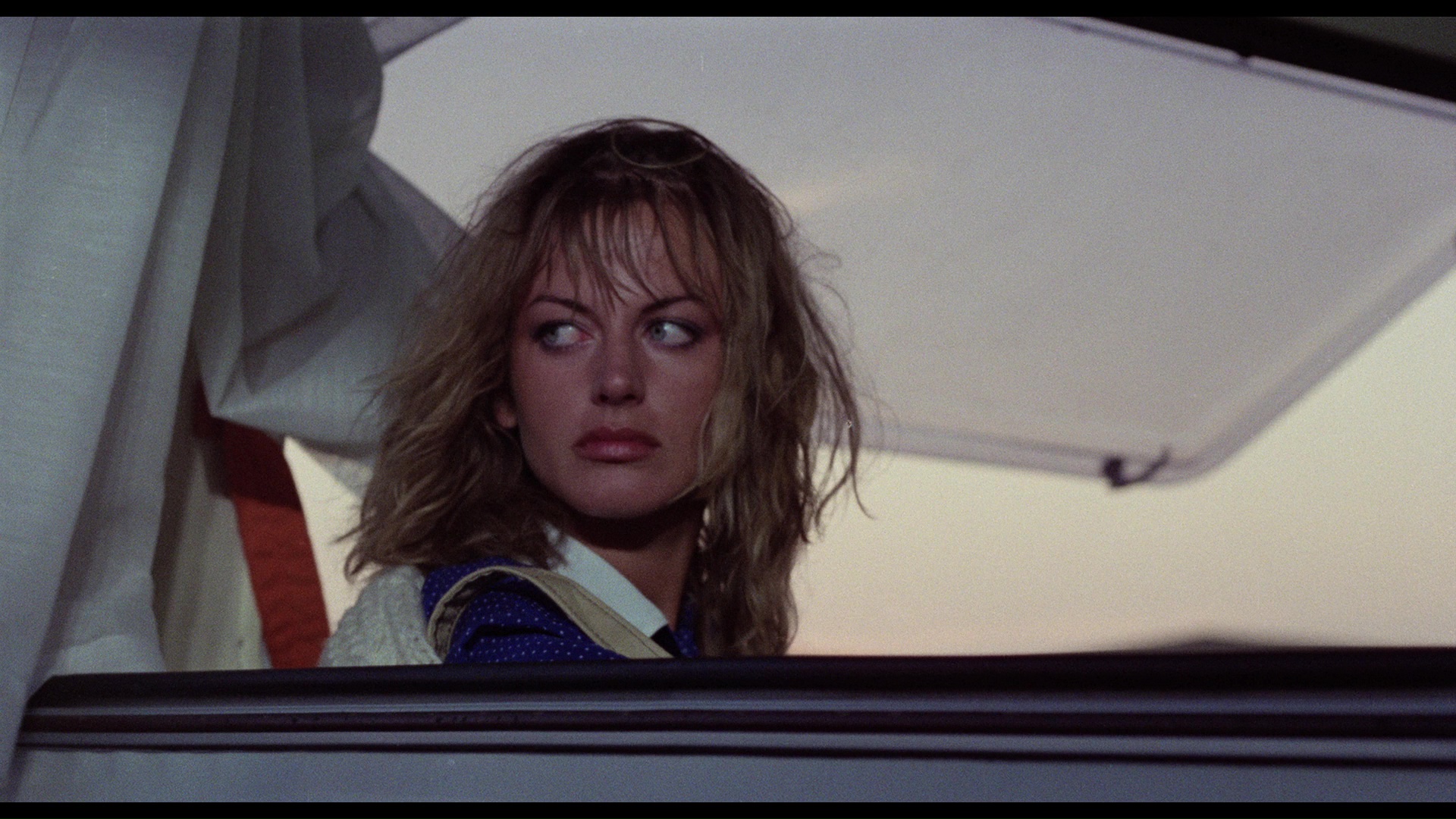 It’s always fascinating to see how non-Australian directors handle Australian stories. What views do they bring to Australia, and how do those views inform the Australian story they intend to tell? Ted Kotcheff delivered a searing takedown of the Aussie bloke with Wake in Fright, a caustic assessment that ocker-masculinity is struggling to shake decades after its release. Michael Powell ended his illustrious career with They’re A Weird Mob, and brought a migrants view to Australia with an endearing skew. Around the same time, Italian director Flavio Mogherini modernised the true story of Linda Agostini in the giallo-lite The Pyjama Girl Case.

Considered one of the more bizarre crime stories within Australia’s history, the tragedy of Linda Agostini endured long after her death. In 1934, a man walking his bull discovered the body of a woman dressed in yellow silk pyjamas. She had been beaten and shot, and then to further the disregard for her life, she was set on fire. This made identifying her difficult, and to help with their investigation, the body was placed in formalin and put on display for the public to come and try identify her. For a decade, the identity of the body remained a mystery, until dental analysis could finally match the name of Linda Agostini.

The relevance of what Linda Agostini was wearing at the time of her death goes into the societal views about women in the 1930’s. For a woman to be wearing silk pyjamas, she was considered to be exotic, and a woman ‘of the night’; the sort of woman who would entertain multiple men at a time. This judgemental view extended to the way police presented her body – as if she were a carnival attraction, just a tent or two down from the bearded lady or the sword swallowing man. While the crude nature of early forensic science and police work allowed this apparently well intentioned endeavour of a public display of a corpse to occur, it still leaves a bad taste in your mouth, giving the impression that there was little respect for the deceased. With the early 1900’s societal view of sex workers or sexually adventurous women being a predominantly derogatory one, there could conceivably be a public shaming aspect to this glorified presentation of the body. These news reel clips from 1939 explore the difficulties that police and the public faced when attempting to identify Linda Agostini’s body.

This is all a long way of saying that Flavio Mogherini’s The Pyjama Girl Case makes for a curious, and very strange narrative about Linda Agostini. Or, rather, a fictionalised version of Linda Agostini, given the film takes place in 1970’s Sydney. Placed right in the midst of the sexual revolution, this version of a mysterious case leans lightly on the lurid genre trappings of giallo cinema, with a firm wealth of skin on display (mostly from lead actress Dalila Di Lazzaro), a brilliant score by Riz Ortolani, and some mild moments of gore. The low body count and infrequent acts of violence may make giallo fans feel that this is far from being worthy of the title of giallo, but the visual style and superb cinematography certainly puts it in the same ilk as its genre brethren.

The Pyjama Girl Case presents a world in transition, constantly in flux. The quiet metropolis of Sydney is presented with no one in sight. Sexual openness is embraced. A shot of the Sydney Opera House beautifully portrays the glorious architecture of the (at the time) newly erected building as a uniting entity, bringing two people together. It’s a fleeting moment, but there’s a clear intonation of a new era for Sydney. Yet, with this said, there is still an unending derision directed towards immigrants, with white ‘Australians’ being eagerly obnoxious to those who come to this country for a better life. Given this takes place just over a decade after They’re a Weird Mob, it’s clear how little has changed. And, given that I’m writing this in the year 2019, well, it’s desperately sad that our view has still not changed.

When retired detective, Inspector Timson (Ray Milland), is asked to assist with the case, he finds himself both perplexed and disgusted by the way that police work has morphed over time. The reliance on psychoanalysis to help find culprits, or understand the motif behind suspects, is met with clear derision. He can’t understand why on earth police officers don’t just get their feet on the ground and ask hard hitting questions. Mogherini appears to agree with Timson’s opinion, with the newer detectives being presented as uptight, tie wearing, suit adorned, well groomed men. They do engage in police brutality when they meet an outwardly repulsive suspect, clearly thinking that if they meet him at his level, then they’ll get a confession out of him.

As Timson visits the embalmed corpse of Dalila Di Lazzaro’s Linda surrogate, he’s clearly disturbed by the disrespect given to this unfortunate soul. In this sequence, arguably the finest and most disturbing in the film, a swath of people make their way past the publicly presented body of this unknown person. One woman faints, many men ogle and leer at her naked form, and one man even goes underneath the glass box that she is encased in, attempting to get a glimpse of every single angle of her body. It’s horrifying to watch, exceptionally disturbing and unpleasant, and it’s Ray Milland aghast face at the end that reinforces just how absurd this very real situation is. Somehow, the question of why this is occurring in the seventies, and not the 1930’s as it happened in real life, never comes into your mind.

While The Pyjama Girl Case isn’t high cinema, it is most certainly an interesting presentation of a woman trying to find her place in the world. Di Lazzaro presents Linda as a free living woman, one who has multiple partners, and who clearly has her own mental health issues. The men she spends time with deliver momentary affection towards Linda, giving her a taste of what it might feel like to be loved, adored, desired, and cared for, but instead, all of the men that she’s with merely want her body and the public presentation of what it means to be with an attractive woman. There is clear empathy for Linda, elevating this film above your average giallo fare, where the women are usually fodder for a killer, being dispatched with all kinds of sensational brutality.

Given the death of Linda occurs as the climax of the film, we’ve had a good hour and a bit to learn who she is as a person, and understand why she finds herself in the situations that she does. Her main partner, Antonio (Michele Placido), genuinely loves Linda, but he also has his own issues to deal with, and Mogherini and co-writer Rafael Sanchez Campoy try to give Placido something tangible to work with. He’s still a frequently unpleasant person, saddled with an equally unpleasant friend, Roy (Howard Ross), who coerces and manipulates Antonio into an act of brutality.

The possibility of violence hangs in the air, genuinely allowing the viewer to appreciate the lingering threat that comes for women with men in society. At the start of the climax, Linda is put into a desperately depressing situation, and Mogherini masterfully suggests the path that boys follow as they turn into men by contrasting an image of a table of boy scouts at a diner, with the exceptionally unsettling and repulsive sight of Tito Garcia’s sweaty patron. The act of sex that he, and two other men, engage in with Linda is presented in such a noxious, grotesque and disturbing manner – this is quite simply one of the most off putting depictions of sex I’ve seen on film. Linda is a mere object to these men, and the disturbing realisation from the youngest of the men (a mere teen, really) that this is the path that he is expected to follow in his life as a man, helps cement the films perspective that society has been cruel to both Linda, Linda Agostini, and to women in general.

One song lingers over the soundtrack, its singer lamenting that, ‘because I’m a woman, vacant beaches are enticing’. This is a decidedly mournful pop song, one that would feel out of place in most giallo films. If given the chance and free from the desire to be loved, Linda would gladly live in a world without men, but this is not the reality that is offered her, or many other women.

The Suicide Squad review – A Movie So Great, We’ve Reviewed It Twice

Which makes The Pyjama Girl Case a quietly depressing affair. It feels unique in the world of horror, outwardly rejecting acts of violence and making us consider our desire to see death and torture, forcing us to realise that these narratives can come from a place of truth. For this film, the modernisation of Linda Agostini’s story feels mildly apt, and thankfully, Mogherini works hard to qualify the life of Linda. Whether this is justified or not via the implementation of fictionalised elements is up to the viewer to decide. As Australia’s Black Dahlia-esque case, there is a curious level of intrigue and mystery that comes with such a long, enduring mystery.

Given this is a more subdued, quiet, and dour horror film than expected from this era, it carries a uniquely Australian vibe to it. And, with that in mind, as Australia’s sole giallo film, with the historical relevance in mind, this is well worth a look.