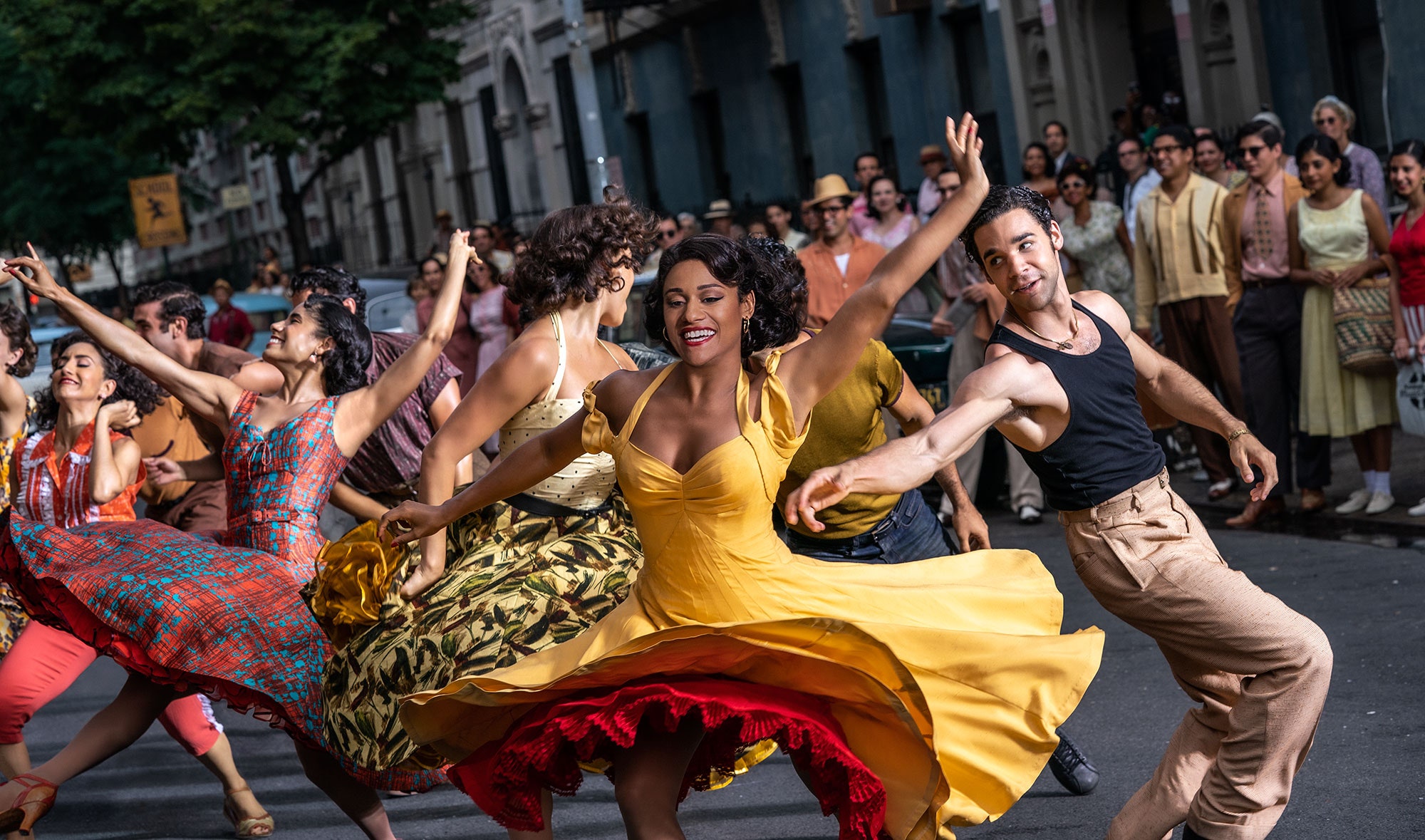 
Remakes of classic films tread difficult waters and it’s confounding that Robert Wise and Jerome Robbins’ exemplary 1961 musical would be on the books for a re-imagining. In lesser hands the conceit that the film needed retelling would seem absurd, but the hands we are given are the assured and brilliant ones of Steven Spielberg; a man who has managed to tackle almost every film genre with alacrity and skill that is unparalleled. At the age of 74, Spielberg has decided it is time to make his first musical, and although there is a little hubris in choosing West Side Story, the visionary filmmaker has once again hit the jackpot.

The story is familiar, not just because the original film exists, but because it’s a take on ‘Romeo and Juliet.’ Two rival houses (in this case gangs) come to blows because star crossed lovers find themselves in the middle of circumstances they are ill equipped to control.

Spielberg defines the late 1950s setting with an extraordinary opening crane shot that shows the West Side of New York City being bulldozed to accommodate the Lincoln Center. In a neighbourhood that is rapidly being gentrified two gangs of youths fight for domination over their shrinking spaces. The Jets, who are made up of poor Caucasian youths and The Sharks, who are made up of recent Puerto Rican immigrants. The gangs fight each other for scraps in a city that cares nothing for them – a turf war that is defined by fear and alienation.

The Jets are led by Riff (a scrappy and mesmerising Mike Faist) and their rivals The Sharks are led by upcoming prize-fighter Bernardo (David Alvarez). They take to the streets in remarkably choreographed scenes where they wilfully take up space in a place that denies them any. The act of movement is an act of rebellion in itself and choreographer Justin Peck defines rebellion within dance. These young men are bursting with frustration and a rumble or pirouette seem to have the same power in giving them a sense of freedom no matter how fleeting.

Between the gangs exist the lovers Tony (Ansel Elgort) and María (Rachel Zegler). Tony is an ex-Jet who spent a stint in gaol for almost killing a man. María is the eighteen-year-old sister of Bernardo, the leader of The Sharks. They fall in love at a dance at the local gym where The Jets and The Sharks have been having a dance off as a prelude to a planned rumble. By choosing each other Tony and María are not only flouting convention, they’re setting the scene for a tragic confrontation.

It seems almost redundant to go too heavily into the plot of West Side Story and partially unfair to consistently compare Spielberg’s vision to Wise’s but such is the nature of a remake that comparisons are unavoidable. Screenwriter Tony Kushner pulls heavily from Bernstein and Sondheim’s stage musical but also gives it some contemporary tweaks to inform a modern audience of the state of play that was the West Side in the late 1950s.

Tony’s backstory is fleshed out more to give him a reason for wanting to stay away from the violence of gang warfare, but his womb to the tomb relationship with Riff is still given adequate space. María is now not working in a fashion house but is a cleaner in a department store. Neither character has anything but the family they fashioned. For Tony it is the Jets and his employer Valentina (played by the original Anita, Rita Moreno). For María it is her brother and his fiancé Anita (the luminous Ariana DeBose) who are her world. Bernardo dislikes America and the struggle he faces to survive, whereas Anita is more positive about the opportunities afforded in New York. The classic argument song ‘America’ moves from the rooftops of the original and on to the streets for a dazzling display. DeBose is electric in every move she makes and her chemistry with Alvarez is undeniable.

Unfortunately the same cannot be said for the main romantic couple. Elgort as Tony seems almost wilfully miscast and at times slows the film to a staid melodrama. Elgort doesn’t sell the central conflict he faces by having to reconcile his relationship with María and his best friend Riff. Although he sings well enough his acting is almost a void and does disservice when he isn’t paired with one of his more talented co-stars. Rachel Zegler on the other hand is an almost perfect María; a young woman waiting to truly live. Zegler’s clear soprano is a joy to hear and set pieces like the balcony scene and the song ‘Tonight’ are so strong because she carries the dramatic and musical weight.

Perhaps the greatest coup the film manages to pull off, other than ensuring it cast Latinx actors in the Puerto Rican roles, is to bring back to the screen the icon Rita Moreno. Moreno plays the corner store owner Doc’s widow Valentina (a new character created for the film). As a Puerto Rican woman who married a gringo she has seen over many years how hard it is for the two worlds to unite. Spielberg’s stroke of genius is giving her the anthemic ‘Somewhere’ instead of Tony and María. Moreno provides the film with genuine heft and pathos. Spanning the worlds of The Jets and The Sharks, she is the voice of reason that is lacking in all other areas, including the law.

West Side Story is a visual and aural feast. The cinematography by Janusz Kaminski is breathtaking and Justin Peck’s choreography is vital and exciting. The production design is also top-notch with the West Side being a character in its own right; one that engulfs and destroys the working poor as they scrabble to fight off gentrification and becoming a lost generation.

Spielberg has paid fitting tribute to the work that came before but also created a spectacle that is truly his own. There are so many perfect shots and indelible moments in West Side Story that once again prove that there are few in the movie business with his mastery. Don’t wait for this vision to come to the small screen, it is by its very nature a big screen event. Beautiful, touching, tragic and with a scope that captures the human condition in the most fundamental way.

Writer: Tony Kushner, (based on the stage play by Arthur Laurents)