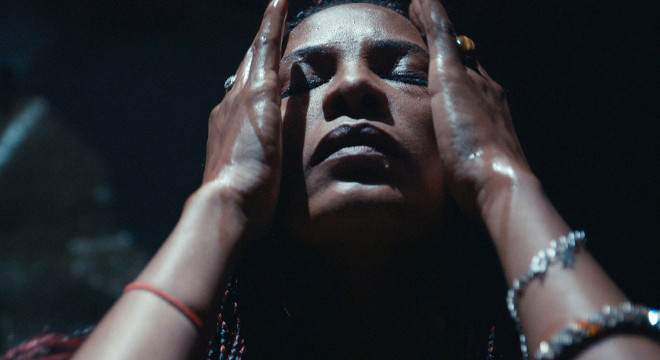 Theatre director turned filmmaker Ros Horin presents The Baulkham Hills African Ladies Troupe, the story of a group of African women who fled their homeland, seeking safety in Australia, subsequently telling their story in a series of stage based performances. Documenting the creation and presentation of what should be a cathartic theatre experience, Horin’s film is one that displays the inspirational power of a community coming together to conquer trauma. Designed to tell audiences about the stories of survival from these refugees, The Baulkham Hills African Ladies Troupe is a film that does raise questions about the involvement of Horin. As both the documentary filmmaker as well as the theatre director bringing these stories to the stage, Horin is eager to assist these women through their trauma. However, is she inadvertently causing more harm than good by publicly displaying their stories?

The focus mostly lies on Aminata, Rosemary, Yordanos and Yarrie – four women who come from different parts of Africa, and are united in Sydney to tell their stories. Through these stories, we are shown the traumatic lives that they have escaped, and hear of the families they had to leave behind; helping inform viewers what lives refugees are escaping in their journey for a safer life. It’s here that The Baulkham Hills African Ladies Troupe is its most powerful. Without the stage performances that this documentary focuses on, we possibly would not have heard these stories.

Personally, while I found the stories inspiring, I did feel most uncomfortable with theatre director Ros Horin’s perpetual mining and exploration into the traumatic events that these women have gone through. Through the assistance of STARTTS (NSW Service for the Treatment and Rehabilitation of Torture and Trauma Survivors), Horin is put in contact with these women, presenting to them a possible way of working through their traumas and – ideally – reaching a cathartic outcome that helps living with these traumas easier. Yet, different forms of counselling or treatment for trauma work differently for each individual. For some, it helps with working through the events of their past, for others it exacerbates the trauma, instead working against the well-intentioned notions of publicly discussing their life events.

While Horin’s intention to bring the stories of the traumatic events these women have gone through to the publics attention is noble, it’s hard to shake the almost exploitative feeling of the performances. Yes, Horin is truly sympathetic to the stories being told, and when one individual is unable to continue on with the performances, she is sympathetic and understanding to her inability to tell her story. However, at times it does feel as if the performance is paramount and the key agenda at hand is to meet the impending deadlines. The existence of the documentary itself – and the fact that it is directed by Horin – furthers the somewhat cynical view that there is an element of white guilt, or rather, exploitation, on display here.

We get glimpses of the final performance that the women had been working up to, with its successful domestic and international run, yet the path to these performances lacks the emotional punch that the performance itself appears to present. Documentaries like 2016’s Chasing Asylum have worked to bring stories of refugees and asylum seekers to the Australian public’s eye. The Baulkham Hills African Ladies Troupe does intend to have the same outcome as Eva Orner’s film (that is, illuminating the human side of a contentious subject in modern Australia), yet often it ends up feeling decidedly empty. The presentation of the story of the creation of a stage performance is less interesting and involving than the actual stage performance itself.

That’s not to say that The Baulkham Hills African Ladies Troupe is not a film to recommend – the core inspirational story of women conquering trauma does have some of its intended emotional kick. However, one can’t help but wonder if there was a different director presenting this story to us that there may have been a more powerful film here. Ros Horin does an honourable job – and is at times critical of her own actions – however, some distance between the subject and the story may empowered the film even more. Ideally, the intended audience (people who are ignorant to the plight of trauma survivors) will get a lot more out of the film than I did.