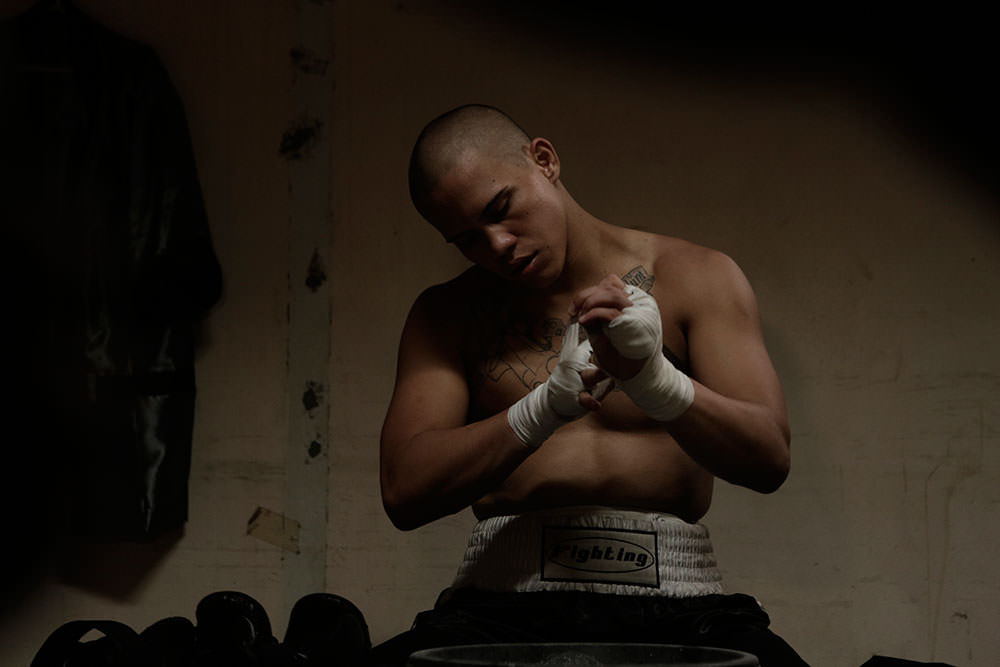 Just like many of the Australian films up for consideration at this years AACTA Awards, Sam and Tom McKeith’s Beast is a film that has flown completely under the radar. After a run at TIFF, a screening or two at the Adelaide Film Festival in 2015, and a quiet shuffle onto screens in Melbourne and Sydney, it’s quickly apparent that Beast has not been given the release it deserves. In what is a stunningly powerful debut film, the McKeith brothers have weaved a tale of redemption in the Philippines with first time actor Chad McKinney as Jaime Grey and Garret Dillahunt as his father, Rick Grey. Made for less than $1 million, Beast is a prime example that huge budgets aren’t always required to create great storytelling.

McKinney’s Jaime is an underground boxer in Manila, and after a brutal fight that opens the film, he leaves the ring the victor of the match. His opponent lays bloody and beaten on the canvas – it’s obvious he’s not in a good way. Jaime’s father Rick – also his trainer – has assisted Jaime with the modified gloves that helped him secure the win in the rigged match. Post-match, they celebrate by taking in the sights of the markets, encouraging each other to sample the local food like balot (fertilised duck eggs). Humidity sears in the air, and as the day wears on, Jaime becomes aware that his opponent from earlier in the day is not in good shape and may not make it.

Boxing films usually focus on the fight itself, with a lead up to the big match, and then of course, the victorious gladiator holding his hands up high post battering. Beast opens with the fight, and then unfolds from there. Starting with an explosion of jubilation after the win, the mood shifts into hangover mode as Jaime realises the result of his fight, and the consequences that are left behind afterwards. Along the way, he has to contend with the Australian gangster who helped him fix the fight and secure the easy victory, while also coming to the understanding that his actions can have severe consequences.

Responsibility is a running theme within Beast, as we get a glimpse of the life that Jaime is working to improve himself in. Jaime’s mother – heard, not seen – is distanced from her son, showing little care for what he is doing with his life. She appears to have abandoned him so she can live her life elsewhere without the worry of raising a child. Rick has affection for his son, but is also keeping his eye on the (ideally plentiful) prizes that his son may provide through his boxing. You get the impression that if things starting turning south, Rick would not hesitate to throw Jaime under the bus.

After Jaime’s opponent dies, he tries to make amends with the now widow Divina (Angeli Bayani) and her son Alvern (Whyzel Myo Indonto) – realising that the world they live in can be a difficult, cruel one, and that through his actions he’s disrupted a family and put them on an irreparable path of despair. It may not be a tense path to redemption, but it’s a powerful one at least. Jaime goes out of his way to get Alvern some eye drops after taking Alvern through a dirty river; presenting us with a man who wants to care and tend for others, just as he may not have had the care and tenderness he deserved as he grew up.

At times, there is genuine mateship between Rick and Jaime, and you get the feeling that seasoned actor Garret Dillahunt certainly took first time actor Chad McKinney under his wing during production. McKinney is a natural here, and his earnest nature to do right carries through in the film. As a boxer turned actor, it’s sad in a way that this may be the only performance we get from him as he has returned to the world of boxing after making this film.

Beast is a solid film that announces the arrival of Sam and Tom McKeith as talent to keep an eye on. Just as with Pawno, there is no reason why Beast should not have received a wider audience release. This is quality cinema that Australian audiences ideally would embrace if they were given the opportunity to.