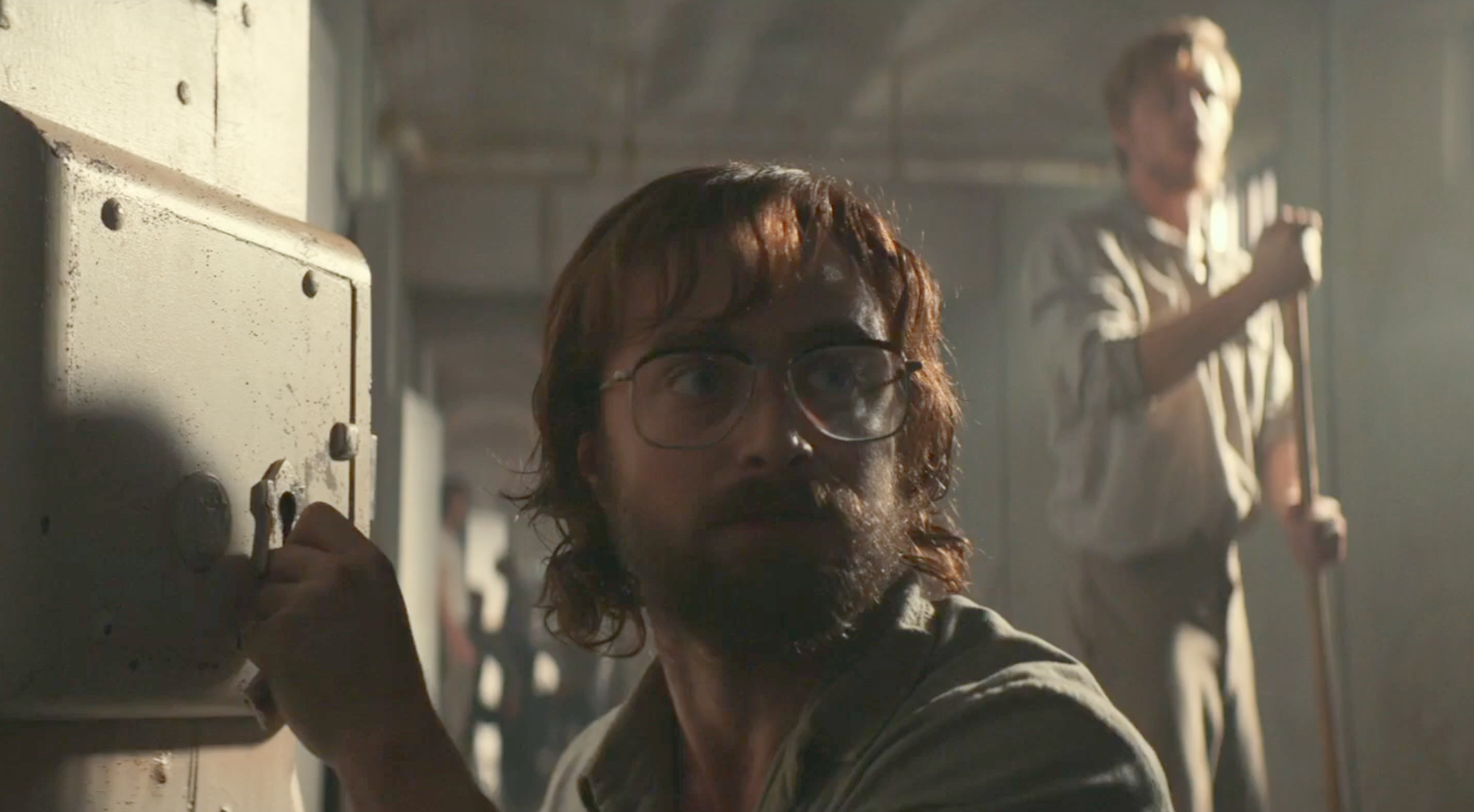 Escape from Pretoria. The South Australian filmed, Daniel Radcliffe starring thriller is available for rent (for a hefty price) so I decided to check it out. The Coronavirus restrictions have ensured that I’ve already spent a bucketload on renting new titles so what’s one more.

Based on a true story, Escape from Pretoria focuses on the prison break of two political prisoners in a South African prison during the days of Apartheid.

The prisoners are Tim Jenkin (Daniel Radcliffe) and Stephen Lee (Daniel Webber) who are fighting for equality in South Africa, calling for the end of Apartheid. But after exploding propaganda onto the streets, find themselves imprisoned.


It’s ironic that the film is inspired by an event that happened because of apartheid and was then filmed in Australia, the country, whose policies, supposedly inspired apartheid.

As the films opens, my eyes are glued to the screen. It’s not that the film held me in a captive state, it’s because the opening scenes were filmed on Pirie Street in Adelaide and I was seeing if I could recognise it. It felt familiar, but there was nothing specific. The transformation from 2019 Adelaide to 1980 South Africa was impressive.

But I quickly found the film held my attention, regardless of filming locations. Radcliffe and Webber in particular are great value here.

Radcliffe portrayed Tim Jenkin well, and with striking physical similarities, he was a great fit. His portrayal of Jenkin had a hint of passion about it, and a sense of urgency. I was convinced that Jenkin was an empathetic man, with a conscience and a sense of justice. This is the third Australian, or Australian shot film for the likeable Brit and I hope he does more. The two before are 2007’s December Boys (also shot in South Australia) which co-starred pre-A-list Theresa Palmer, and 2017’s Jungle, which was my first published review.

Daniel Webber (Danger Close: The Battle of Long Tan), the young Australian actor whose star is rising, portrayed Lee just as well. While physically, he wasn’t the match that Radcliffe was to Jenkin, but his performance matched Radcliffe’s perfectly. As passionate as Jenkin, and as empathetic, but he also seemed angry, which was enjoyable.

The pair were supported by Mark Leonard Winter, who played the third real life escapee in Leonard Fontaine. Realistically it was an equal role after the first act, and if I’m honest, it was also my favourite performance of the film. Once again, with the same traits as above, but he was far more emotional. He was also a spitting image of Award-Winning Author and former Manus Prison detainee Behrouz Boochani and depending on Winter’s heritage, could be a great choice for the future film that will surely come out about Boochani.


In the supporting role of Denis Goldberg, another anti-apartheid campaigner and somewhat a mentor to the men, is Ian Hart. Hart is an experienced character actor and brings every ounce of that experience to Escape from Pretoria.

Escape from Pretoria comes from director Francis Annan, who also co-wrote the adaptation from the Tim Jenkin authored book. The direction is simple, but effective. A lot of still shots, and close ups, it really helps establish a claustrophobic feeling and it was well done. I look forward to Annan’s next film.

Escape from Pretoria is a tightly wound prison-break drama that makes for great entertainment. It’s well directed with excellent performances and won’t disappoint.