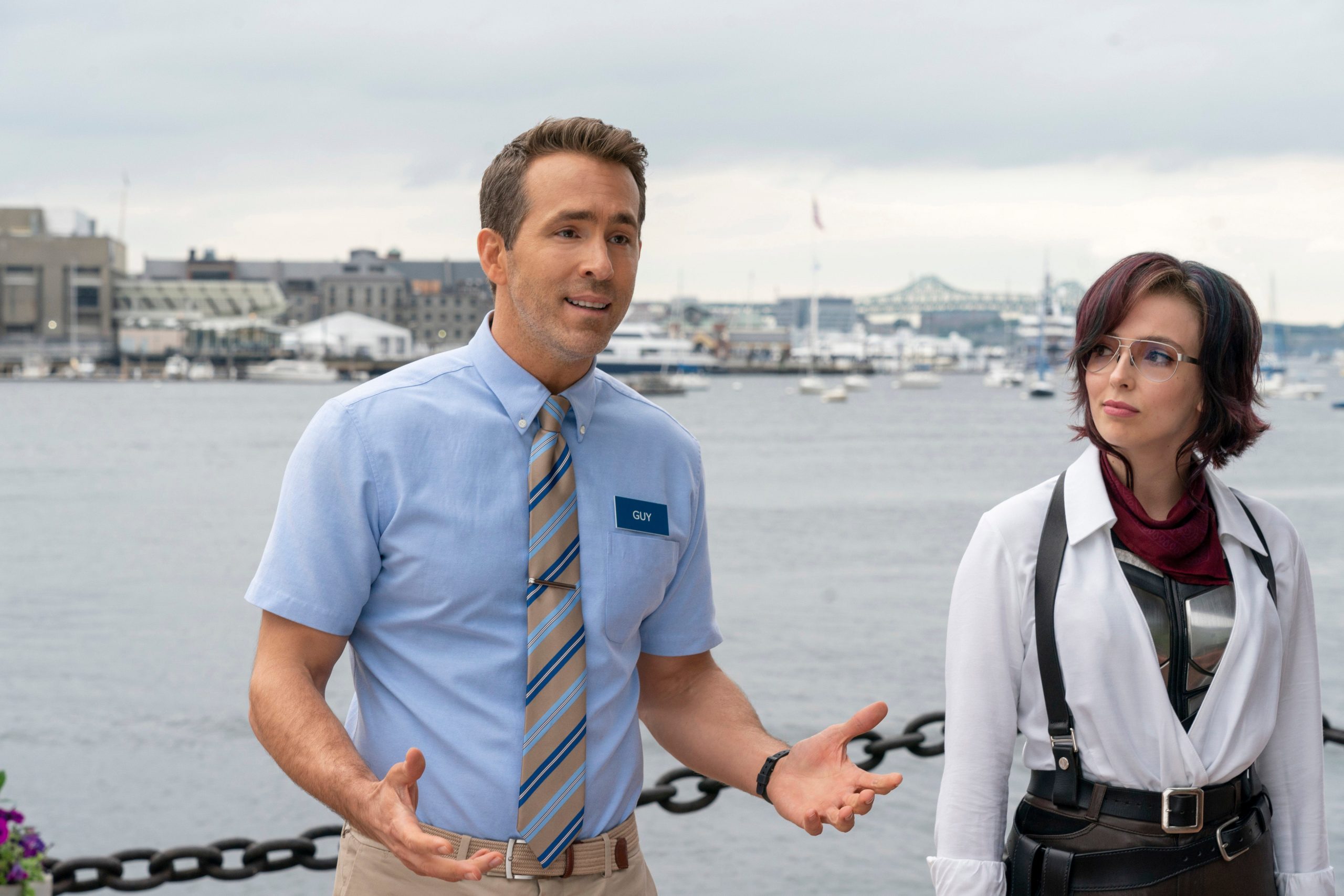 
Directed by Shawn Levy, Free Guy stars Ryan Reynolds as Guy, an NPC (non-playable character) inside the free-for-all shoot-‘em-up video game “Free City”. When Guy suddenly meets Molotov Girl (Jodie Comer), a real-world person’s avatar, and discovers what and where he is, he develops total autonomy and starts to change things around him for the better. In the real world, Molotov Girl’s player Millie (also Comer) and her former business partner Keys (Joe Keery) are trying to prove “Free City” was an illegal rewrite of their code for an original game, and set out to use Guy’s new change of direction to stop the game’s studio chief Antwan (Taika Waititi).

Free Guy’s cast and crew have talked in recent weeks about how it is the only mainstream wide-release film coming out in this winter (summer in the Northern Hemipshere) movie season to be an original idea. While it is true that there’s no previous version of Free Guy’s exact story, I wouldn’t call it original.

In the movie, “Free City” looks and feels like an amalgamation of the manic violence and criminal freedom of Grand Theft Auto with the stylised combat and player design of Fortnite. It’s also co-written by Zak Penn who recently co-wrote Steven Spielberg’s Ready Player One, so there’s a tendency to reference pop-culture in a way the screenwriters think gamers would talk to one another. Even the main plot of Guy’s awakening has shades of The Matrix, The Truman Show and Edge of Tomorrow.

Free Guy may be calling itself an original movie, but it certainly feels familiar.

This is coming from the same director as the Night at the Museum trilogy and Real Steel so the result is broadly-positive, mostly family-friendly (there’s one unexpected F-bomb), and totally acceptable. There’s a scope and scale for the action and scenery that you can appreciate from afar, none of the subject matter is handled in a facetious manner, and at the core it’s all about true love and friendship.

The best thing I can say about Free Guy is that it’s just fine. Ryan Reynolds is perfectly-cast in this role of a bright-eyed goofball who makes self-deprecating remarks in the middle of action scenes and never takes anything too seriously. Jodie Comer is enjoyable in both roles of her video-game avatar delivering cool looks and shooting guns and rocket launchers without blinking, and the contrast of her longing and wronged real-world counterpart. I enjoyed her chemistry with both Reynolds and Joe Keery in different contexts, and I can see her continuing to have more and more high profile roles building on her success with Killing Eve.

I can’t say that I would whole-heartedly recommend Free Guy however as it’s not all that funny. It’s a nice and inoffensive watch with a few fun moments, but there wasn’t any standout joke or sequence that had me laughing with abandon. Of course, comedy is totally subjective, but the movie felt too married to its own script. This became a larger problem when Taika Waititi comes into play. Whether he’s acting or directing or both, Waititi is known for his wild improvisational moments, but he suffers here with a script he didn’t write nor does it feel like he changed any part of. He’s stuck in an obnoxious role that he does try to push the absurdity of, but the real Taika is never set free. If you have Taika Waititi, let him be Taika Waititi. Lil Rel Howery feels like he made the role is own, however, and it worked the best. So why not the Academy Award-winning screenwriter, actor and director?

If you are in the mood for a comedic action-adventure just under 2 hours starring some talented people, with a story mostly about kindness and positivity and a completely predictable plot and character journeys, then Free Guy is the perfect fit. I never hated watching it but I never felt wrapped and delighted by it. The movie is simple and nice and unchallenging. I never asked it to be anything more but it still could have tried. The celebrity cameos are rather delightful and it will get Mariah Carey’s “Fantasy” stuck in your head. So that’s something.