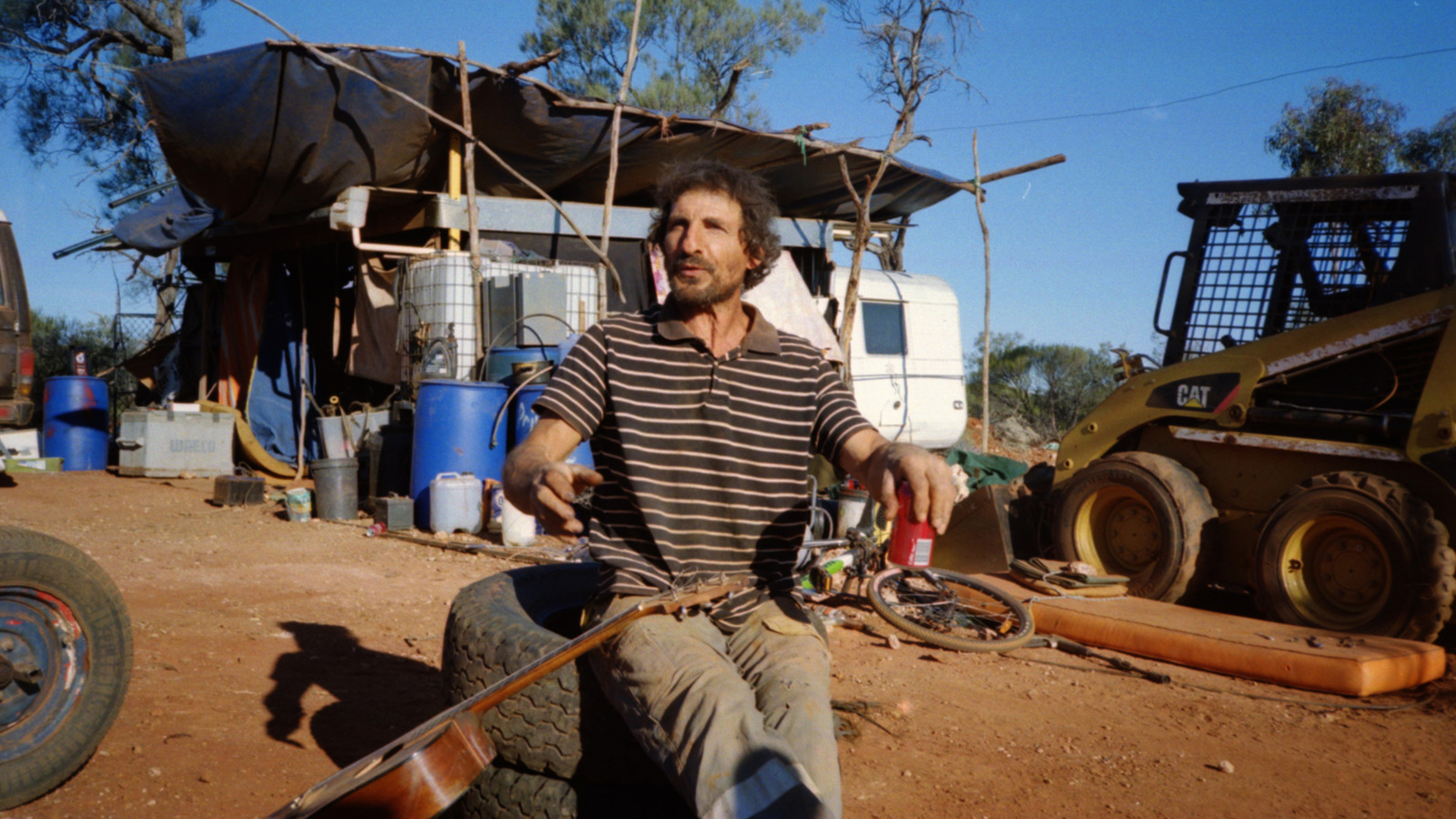 Set during the 2019 Kalgoorlie-Boulder Mayoral election, General Hercules positions the titular John ‘General Hercules’ Katahanas as the David to the incumbent Mayor John Bowler’s Goliath. The regular person versus the political leader is always an engaging thematic battle, but director Brodie Poole is interested in more than this, turning his gaze towards the history of Kalgoorlie, the impact of racism, and the plight of the town under the shadow of the greedy. Poole captures the inner machinations of modern Australiana in a grotesque, grotty, hilariously philosophical, occasionally despondent manner, creating one of the most gloriously engaging documentaries to emerge into the pantheon of Australian cinema in a long time.

General Hercules politico-focus initially sets itself as a rural counterpoint to Bob Connolly and Robin Anderson’s touchstone doc Rats in the Ranks, but it quickly evolves from being Rats in the Superpit into a vessel that gives the citizens of Kalgoorlie the chance to present their diverse, authentic selves on screen. Through the prism of an election, we see a great level playing field where the visionaries and the misguided sit on the equal ground as those seeking quality, justice and social stability or to maintain status quo.

Deep in election mode, Mayor John Bowler takes to the streets to fight off his four competitors. These include Pam O’Donnell, a grandmother running on the platform of family under the banner ‘Nanny Pam’; local council enthusiast and documentarian in her own right, Suzie Williams, who keeps creative scrapbooks and journals of council meeting discussions, replete with aggravated drawings in response to discussion points; Ian Burt, a Libertarian-adjacent figure who would rather see the local council completely removed than anything else; and John Katahanas, a mostly shirtless, always engaging larrikin who lives on the outskirts of Kalgoorlie in his weather-beaten caravan, searching for gold, and making plans for the future of Australia.

Katahanas’ desire to overthrow the Mayor of Kalgoorlie-Boulder comes with a healthy dose of scepticism about the manner he operates the council. Alongside fellow Kalgoorlie citizens, Katahanas stokes murmurs of corruption online and in the streets, raising salient queries about John Bowler’s membership at the local golf club, which in turn owes the city hundreds of thousands of dollars. While General Hercules doesn’t detail John’s full three hundred plus dot point plan of what he would enact if he were to become mayor, it does offer moments where Katahanas explains his vision for turning Kalgoorlie-Boulder into a nuclear-powered region. As soon as the words leave his mouth, he’s conscience of their perceived impact, being strenuous to define that he means a mini-nuclear-power station, and not a Fukushima level generator. It’s the nuance of it that matters, after all.

Poole straddles the line of being enamoured by his main subject – Katahanas – and wrapped with curiosity about his worldview, using his existence as a conduit for the history of Kalgoorlie and the fallout of Paddy Hannan’s fortuitous discovery of gold in 1893. Interspersed between moments at John’s home, and following candidates out on the hustings, Poole entwines motifs that encapsulate the history of Kalgoorlie into this political event.

Alongside fellow cinematographers Jaydon Martin and Joe McLaren, Brodie Poole presents a vision of Kalgoorlie that is entrancing and horrifying, yet it is forever in awe of the transformation that is undergoing the town on a physical, spiritual, and political level. Poole choice of contrasting imagery and scenes layers upon one another to create an, at times, gut-tightening experience of unease, and others, furious bouts of laughter and hilarity.

A captivating and unnerving shot of vomiting molten gold spewing upon the land in the dark of night plays like footage of a far-off world. That entrancing imagery reflects against the debauchery of a day at the races, where swathes of fancy dressed men and women lose their inhibitions in a perfume of beer and wine and the promise of financial glory at the betting box. The excess of the Bacchanalia is itself contrasted by images of troupes of high-vis-adorned FIFO workers being ferried in from Perth to dig a truck load of dirt out of the Super Pit, make a bunch of money for some company that isn’t Australian, then fly on home again. The wealth that is conjured from these rare earth minerals will never be spent in Kalgoorlie, instead leaving a gaping hole for which the town can further establish their empire of dirt within.

The gaping maw of a goldmine colloquially called ‘The Super Pit’ lingers like a carnival sideshow tourist attraction only metres from the town. Its hunger is never satiated, and its size forever growing, creeps over time, swallowing history, swallowing the town itself, and swallowing memories of the past into a void of black nothing. Kalgoorlie sits in the path of the oncoming void, with the 30,000 people who call it home trapped by the progression of the ouroboros of mining. They live their lives like yabbies’ being cooked alive on a barbecue, trapped by the flames and stuck to their fate. As one person comments, the town is “A walking, breathing sarcophagus.”

In the Kalgoorlie museum, the spectre of Paddy Hannan is projected into the darkness, retelling his story with a voice that sounds like it’s ringing from the void of the pit itself. His face moves with pain and anguish, as if it’s pulling against the streams of light that bring it into existence, trying to break out of its spiritual realm and into humanity once again.

Poole’s fascination with humanity as a whole comes through strong in moments where he lets the camera just roll and capture the absurdity of the voting mind, like when a man walks up to John Bower on the street asking him “Are you the guy in the posters?”, and then demands that he makes the skimpies skimpier. Later, the conflicted imagery of an Aboriginal pastor dressed as Santa, preaching the words of Jesus, plays against the same pastor talking about the rampant racism and housing inequality that exists within Kalgoorlie. It’s clear that Brodie isn’t looking to provide an answer for the state of this mining nation we call Australia, but rather to take a look at it under a microscope and tease out the tendrils that make it whole.

Joshua Wilkinson’s score is at times otherworldly, amplifying the feeling that Kalgoorlie is not from this world. Guitars wail like possessed goats, screaming into the night as if they’re minions summoned from the maw, prowling the bush at night. Often the score for a documentary feels rudimentary, as if it is the last creative choice before pushing the film into the world, but Wilkinson’s work here is truly masterful, elevating the General Hercules to even grander heights.

A rolling motif of The Animals iconic tune House of the Rising Sun carries throughout General Hercules, from a guttural boozy karaoke event, to John Kataharas’ unplugged gig in the middle of nowhere. The guitar lick that opens the song is peppered throughout the film, accentuated by the sound of John’s metal detector as he searches for riches under the soil, its strained wail reflecting a pained earth back at its holder, crying for a reprieve, squealing like an auto-tuned baby on the cusp of wailing.

Its tortured sound harmonises alongside the anger that flurries within John, a modern man who rages against the system he’s tethered to. Within General Hercules, we see Kalgoorlie as a town that is furious and hurting, with the riots that eventuated after continued inaction after multiple deaths of Aboriginal folk. While the societal and structural racism of Australia isn’t a key focal point for the film, it is pointed that we see a town that appears to be mostly ambivalent towards assisting and supporting Aboriginal kids, and instead is keen to install a system that brings back ‘the cane’, all the while maintaining status quo.

At its close, General Hercules left me feeling giddy and light-headed. The characters that Brodie captures on screen aren’t sideshow attractions or laughingstock, instead, these are figures that are full of intrigue and wonder, communing together on film to summon the powerful reminder that the nation of Australia is not a homogenous entity with citizens who are alike. It’s a complicated and conflicted land, wrought by unresolved history and non-existent conciliation, powered by greed and the fight for glory, and that’s all reflected with alarming lucidity on screen here.

General Hercules is like an opportune find in the wilderness, kicking a dirt covered gold nugget and discovering a wealth of riches. It stands as a triumphant example of what modern documentary filmmaking looks like. I can’t wait to absorb the future filmmaking vision of Brodie Poole into my senses and memories, for his world is one where all manner of horrors and demons are born.