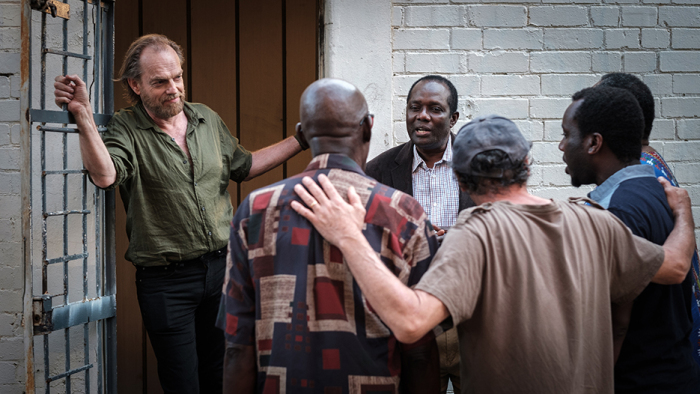 Filmmaker Ben Lawrence showed an affinity for damaged people with his acclaimed documentary, Ghosthunter, and that empathy for injury and vulnerability carries over to his first fiction feature, Hearts and Bones.

The film brings together two markedly different people who are bonded, even if they don’t fully recognise it, by congruent traumas. Conflict photographer Daniel Fisher (Hugo Weaving, great as ever) is clearly burdened with PTSD – the horrific opening sequence, which sees him on the job in Iraq, is implied to be only one of many brutalities he’s witnessed – but he copes through denial, burying his feelings and throwing himself into preparing for upcoming retrospective of his work. His brooding self-involvement is knocked out of kilter when a Sudanese taxi driver, Sebastian Ahmed (newcomer Andrew Luri, who is simply arresting), turns up on his doorstep.

A refugee now settled in Australia, Sebastian has two requests of Daniel. Firstly, could he not exhibit any photographs taken in Sebastian’s home village, which was the site of a brutal massacre? Secondly, would he like to photograph Sebastian’s choir group, which is comprised of male refugees from conflict zones around the world? Nonplussed, Daniel demurs, and that should be the end of it, but his own sublimated trauma brings them together – when Daniel unexpectedly collapses, Sebastian drives him to hospital, and so the two men begin to become a part of each other’s lives.

While its primary area of investigation is the plight of refugees, Hearts and Bones is a remarkably complex film, gradually expanding from its initial narrative push to explore themes of masculinity, fraternity, identity, and cultural power. One of the key questions the film asks is who has the right to tell out stories? Sebastian wants to exert control over his past by effectively burying it, while Daniel avers that people need to learn from and about atrocities, even if exhibiting them causes some measure of extra pain for the victims. At another point Josie Avril (Hayley McElhinney), Daniel’s life partner, informs Anishka (Bolude Watson), of something she has learned about Sebastian’s past, and is rebuked for it – it simply was not her story to share.

The past hangs heavily over the proceedings in Hearts and Bones, and every character is wrestling with some haunting hurt behind them. While Daniel ruminates on Sebastian’s request, he must also deal with Josie’s recently announced pregnancy, which brings back painful memories of the daughter they lost years previously. It’s an experience Daniel has smothered under his work addiction – he’d literally rather be dodging shrapnel than be grappling with his feelings – but what do you do when your story is shared with someone else? Who has ownership?

Which sounds like pretty grim going, but ultimately Hearts and Bones is a warm and humane film about making peace with our past and ourselves. It’s also a remarkably masculine one, investigating the ways in which men deal with – and frequently fail to deal with – their pain. Daniel is basically a laundry list of physical and psychological ailments hailing not just from his years in the field, but his inherited notions of masculinity, while the gentle Sebastian has effectively rebuilt himself completely following his wartime experiences, sealing away the man he was from the man he wants to be.

Lawrence and his co-screenwriter, Beatrix Christian, instead present a different model of masculinity: strong but flexible, gentle by choice, not bound by rigid codes of stoicism. We see it in the welcoming smiles and sad eyes of the refugee choir, in Sebastian’s desire to fix up the dilapidated house he has bought for his young family (Daniel also pitches in – men bond through shared labour), in the way Daniel’s fixed posture shifts and softens as he comes to realise that he is not alone in his trauma – he shares his war wounds with Sebastian and the choir, he shares his personal grief with Josie, he is not alone.

Lawrence captures all this in a quietly naturalistic style, using soft available light and close framing to let us really look at his characters as they go through their turmoils and tentatively reach for connection, rendering their story in a kind of everyday poetry that is at times quite beautiful to behold. There are moments when he overreaches – the film’s coda, in which still photos of refugees are montaged to Talking Heads’ “Road to Nowhere”, won plaudits at the screening I attended, but seemed a bit on the nose to me following the rest of the film’s more understated messaging – but on the whole this is a remarkably assured and deeply affecting film.