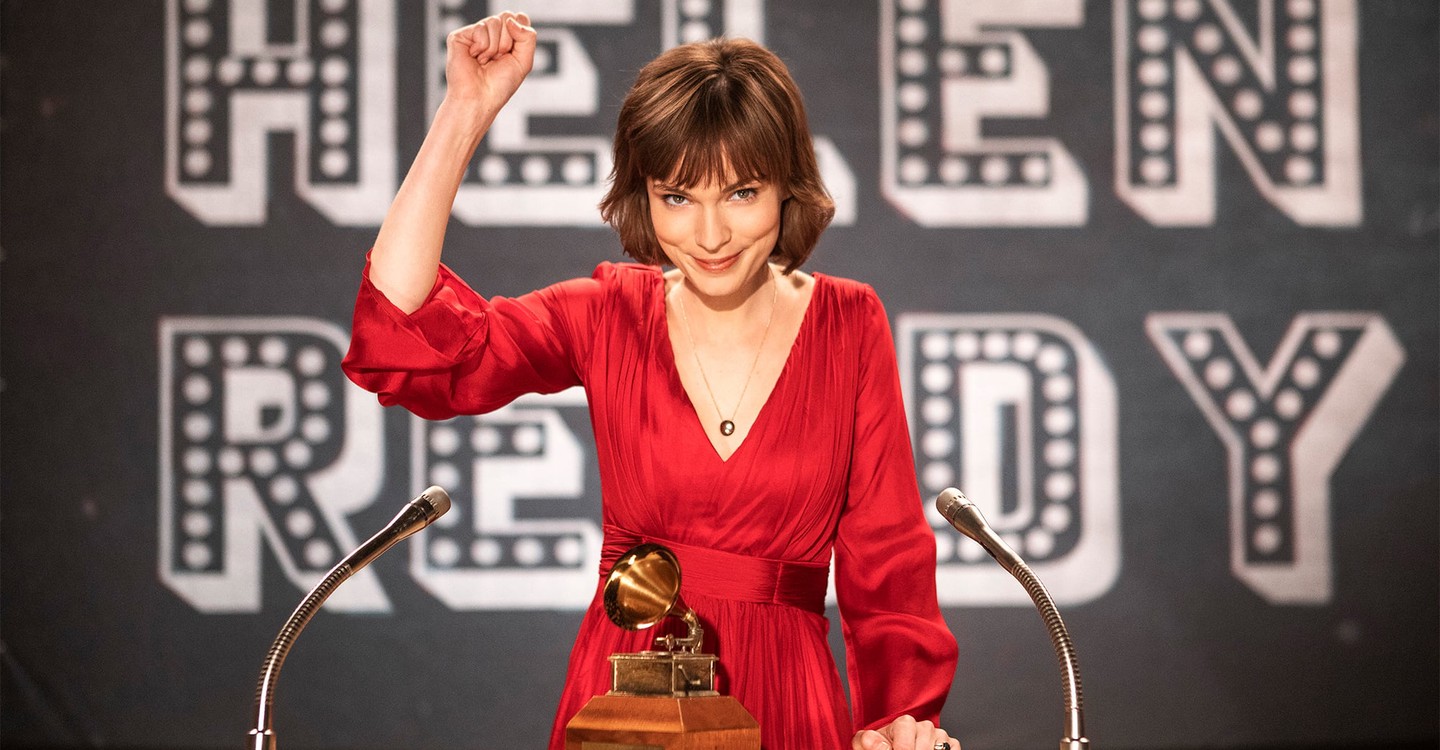 Screen biographies of music artists have been coming thick and fast in recent times. Olivia Newton-John, INXS, The Easybeats and even Molly Meldrum have scored their own dramatised “This Is Your Life” in the form of TV miniseries (the Easybeats one actually being pretty good). And of course, we’ve had the Readers Digest versions of the lives of Elton John and Queen retold on film to great popular success.

I Am Woman, had been intended for full theatrical release, before the pandemic presumably scuttled those plans and the film was bought by streaming service Stan. as original content. It chronicles the unprecedented international success story of Australian singer Helen Reddy, who arrived in New York at the tail end of the 1960s hoping to launch a career as a recording artist. But with the music industry at the time being male-dominated, misogynistic and dismissive of anything that didn’t fit with current trends, Reddy’s sweet, safe pop songs initially fell on deaf ears in a world dominated by The Beatles and the Rolling Stones – until her 1972 equal-rights anthem I Am Woman started getting radio play and climbed the charts. Reddy, seemingly overnight, was a superstar.

The problem with biopics in general – but ones about music in particular – is that they always seem to be more of a “greatest hits” of the subject’s life. And in the case of music artists, that means each delineated chapter in the life story gets to anchor itself to a time period with a familiar song.

Who could forget the ludicrous scene in Oliver Stone’s The Doors when keyboardist Ray Manzarek noodles on a keyboard for all of 10 seconds before “Light My Fire” emerges fully-formed? Such conceits are common in music biopics, and this one’s no exception. Reddy is shown as having a sudden flash of inspiration while looking at her sleeping daughter, writing down two lines from the famous chorus of “I Am Woman”… and then presto, one brief montage and the song is complete! There’s no mention of Ray Burton, the man who wrote the music, nor of the dispute he had with Reddy in later years over royalties – though to be fair, it was Reddy’s lyrics that mattered and endured.

The nearly two-hour run time is fairly economically used – yes, there are song performances, but with a couple of exceptions they’re shortened drastically. And even as someone unfamiliar with the details of Helen Reddy’s career trajectory (her soft pop with an affected Southern twang sounded like your parents’ music back in the era of Bowie, Bolan and Queen) it’s not hard to predict the trajectory of this story. Rise, triumph, indulgence, drama, fall, redemption. The song remains the same.

There’s a lot to like here – the production design is on point, faithfully recreating (within budgetary constraints) the amber-tinted world of the ‘60s and ‘70s. The cinematography by Dion Beebe is as sumptuous as you’d expect from a man whose best work has been very much focused on characters rather than the wider scope of a scene (tellingly, this is that rare feature film these days that’s not shot in a widescreen format). Director Unjoo Moon has previously made a couple of music documentaries, but this is her first narrative feature – and it’s a confident, assured debut.

Obviously, music is a major element of the story, and the re-recordings of Reddy’s key hits sound superb. Tilda Cobham-Hervey is suitably luminous as Reddy, though she doesn’t perform the songs – they were all recorded by a session singer, then mimed on camera. The performances, thanks to some very loose miming from Cobham-Hervey, come across as almost surreal at times, which may have been deliberate; every song is fully orchestrated with lush strings on the soundtrack, even when there’s not a violin player in sight on screen. We’re perhaps being shown the performing version of Reddy the way the public saw her at the time, life’s turmoil swept away to create an almost serene stage version of herself, usually singing her songs while anchored to one spot on the stage, faintly smiling as if she had not a care in the world.

The screenplay (by Emma Jensen, whose only other filmed work is 2017’s Mary Shelley) can’t completely avoid the episodic pitfalls of the biopic and some very stilted dialogue, but thanks to Cobham-Hervey’s strong lead performance it does at least feel like this is a story with a trajectory, rather than a series of vignettes. This is also helped by the fact that Reddy’s career wasn’t defined by visual moments in the way that those of Elton, INXS or Queen were. You won’t find any cheesy re-imaginings of film sets or music videos here. Capable support is provided by Evan Peters as Reddy’s manager and husband Jeff Wald – one occasion when the obligatory American actor isn’t just there to sell the film overseas, instead actually making sense from a story point of view. Danielle MacDonald is terrific, if a little under-utilised, as influential expat Australian music journalist Lillian Roxon. In a nice generational touch, the film’s only original song is performed in the film by Reddy’s real-life granddaughter.

I Am Woman has the same problem as almost all biopics – we know exactly what’s going to happen and how the story ends. It’s up to the filmmakers to use that familiar journey to give us some insight into the person or people behind such familiar events and works. I Am Woman often succeeds at that, but never quite articulates the reasons and emotions behind key events in its subject’s life (for an example of how this genre can be done better, look up the Brian Wilson biopic Love and Mercy).

Ultimately, if you’re one of those people who will faithfully watch any music biopic eagerly hoping for it to be that one that finally does something different, you won’t find anything ground-breaking here – but you could do far worse.