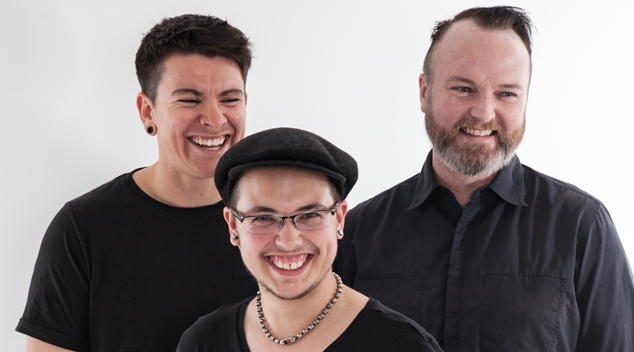 It’s Not Just Me Review

Focusing on four transgender men who are at various stages of their journey from transitioning from female to male, It’s Not Just Me is a personal and powerful look into the Australian LGBTIQ experience. From the stories of Simon and David who we spend months with, to the day in the life of Max, and the self-directed GoPro perspective of Logan, there is a wide array of personal experiences and narratives that drive this story along. Created as part of director Jonathan Messer’s PhD thesis, It’s Not Just Me looks at an aspect of the transgender story that is rarely displayed in media – the voice of the trans man.

Documentaries are mostly considered an objective form of cinema. Usually the director selects a subject and then works about documenting that subject with their camera, rarely interacting with said subject, merely observing them. The subject of the film is rarely a collaborator within their own story – they are the subject after all. With Messer’s documentary It’s Not Just Me, the format of the traditional documentary is skewed a little to become a purely collaborative process between subject and filmmaker.

In the general public consciousness, the trans woman story has been widely noticed with outspoken public figures like Laverne Cox and Caitlyn Jenner talking about their experiences. However, the voice of the trans man has not had the same reach. Thanks to Messer’s documentary, the trans man story has received a platform to extend their voices. Even though each character that the film focuses on identifies as a trans man, they are still have their own unique identity with their own unique challenges.

Often the narrative surrounding transgender folk is skewed towards tragedy. So, it’s with great joy to note that thanks to the energetic subjects, It’s Not Just Me is full with beautiful humour and in turn, wonderful humanity. There are still moments of heart break, and a keen focus on the emotional toll is still there, but they are surrounded by moments of levity – a party that David attends with his friends is a particular moment of humour.

Unfortunately due to societal ignorance, there still appears to be a lot of ‘questions’ about the transgender story. Even though it is not the documentaries aim to educate and inform, it is unavoidable that this may be the outcome for many viewers. Questions about the cost of transitioning, what happens to your body when transitioning, and the emotional toll of transitioning, are all addressed. This is not a documentary that aims to shy away from the reality of what goes in to transitioning with familial divisions being explored in depth through Simon’s story. In more than one circumstance, relationships end for various reasons, and even though the subjects all identify as trans men, that is the only similarity between each person, making each relationship progress in a unique way.

While the focus is mostly directed towards Simon and David’s journey, the addition of Max’s perspective is a fascinating one. Through wordless scenes, we see Max catch a train to work, carry on through a day at work, and then going home. It’s simple footage that may leave some asking – well, what about Max’s backstory? But, to ask this question is to negate the purpose of showing ‘a day in the life’ of Max’s life – that is, to show that Max is accepted in society and that there is no (visible) conflict. It’s hard not to bring politics into the discussion when talking about LGBTIQ stories – especially given the heated discussions about what toilets people can use (which those against transgender folk using their respective toilets always seem to forget that their toilet at home is a gender neutral toilet) – so the inclusion of Max’s story where he goes about life as per usual helps present a society that everybody deserves. That is, one that people can go about their lives without consequence.

Logan’s story is captured from his perspective through a GoPro camera. Even though the film is a purely collaborative work, these segments provide us the opportunity to see Logan’s story purely through his own eyes. Where Simon and David’s segments showcase a more ‘conversational’ style of storytelling, Logan’s segments show his life in a ‘warts and all’ manner. This is as personal a perspective as can possibly be delivered within the film – and it’s all the better due to it.

As a documentary, It’s Not Just Me is fascinating, entertaining and informative. For most audiences, they will walk away with a greater understanding of the transgender story and will hopefully have greater respect for transgender lives. However, for the LGBTIQ community, a film like this is massively important. Going through a life changing event such as transitioning between male to female or female to male is a monumental thing, and it’s for those people that this film will work the best. For those people, they will realise that (just as the title suggests) they are not alone, that It’s Not Just Me going through this journey.

Station to Station Review – An Amiable Journey Through the Creative Process

As this documentary is created as part of Jonathon’s PhD, it is unavailable for viewing yet. But, once Jonathan’s PhD is completed it will ideally be released through a distributor or online in some format. Hopefully an Australian distributor picks it up at that stage as this is the sort of documentary that audiences deserve to be able to see.

(In lieu of watching the film, check out this interview for Out Perth with Jonathan Messer, David and Simon.)