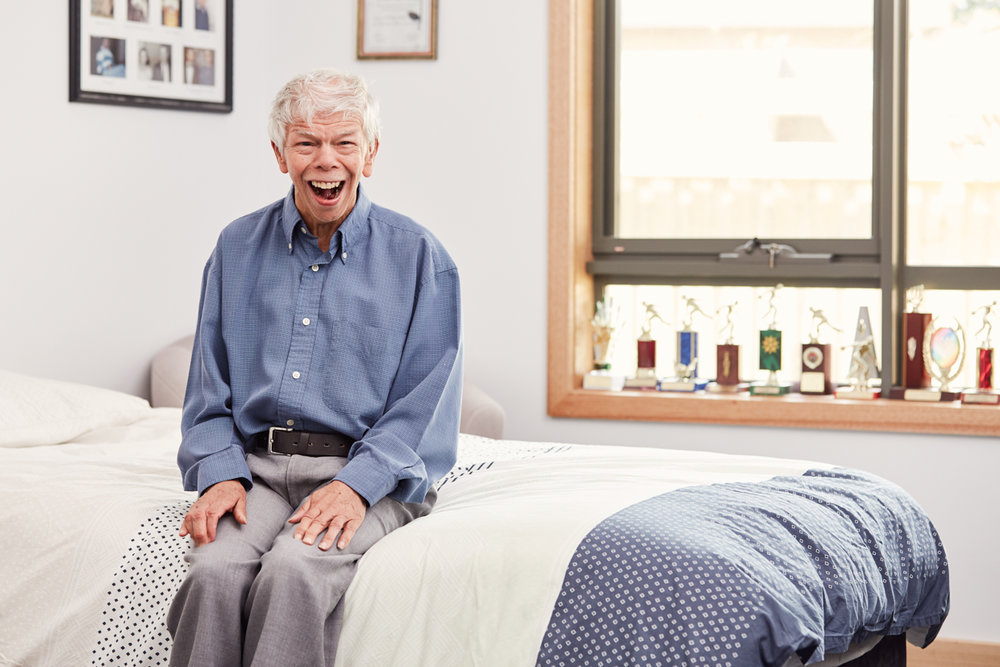 Depictions of people with disabilities in films are often troubled with a predilection for filmmakers to craft their stories in a manner that will result in their stories serving as what is known as inspiration porn – in short creating a narrative that despite their disability they have done something uplifting or challenging that would be seen as a win for an “able bodied” person, but for a person with a disability is a triumph over their own state of being disabled. These kinds of stories are essentially damaging because they suggest that for people with disabilities to be treated with respect and their humanity recognised they must do more than others to achieve acknowledgement of their humanity.

Instead, Leaving Allen Street is a work that always places the humanity and dignity of its subjects first. The triumph doesn’t come at the cost of the piece condescending to the people it was filming by asking you to feel pity for them, instead, from the first moment it introduces you to a set of diverse and often warm and hilarious individuals who are being given their first real opportunities as older adults (many in their 50s) to live their lives in the wider community, gradually becoming more self-directed and less oriented towards the insular, given them true agency of their own lives.

The communal living space where the thirty people have been institutionalised is The Oakleigh Centre, with many of them being there since their early childhood, set aside from general society. It’s important to note that when the Oakleigh Centre was first built in the late 1970s it was considered best practice. As grim as the interiors are through a contemporary lens, for the parents who placed their children in the facility it was at the time the only option other than living in nursing home facilities or often with people with severe mental illnesses. For some of the parents, like the delightful Valerie, the Oakleigh Centre helped sponsor their visa to Australia.

Attitudes around people with intellectual disabilities are complex and have been slower to change in society and also within the professional disability sector. The balance of finding a way to support people to be a part of their community with their own agency is constantly weighed against a system and society who are unsure of how to achieve that goal, but who are also often uncertain that that goal is indeed achievable.

Director Katrina Channells and her team at Yarn have brought to life a sensitive documentary that takes these issues into account and puts the focus on people being given agency to make choices that general society take for granted every day. Whilst the residents live in the institution, they lack the ability to make more than the most basic of choices. They don’t cook for themselves; they don’t shop for their food. They go from their residence to their day program, which is onsite at the Oakleigh facility and rarely, if ever, interact with people who are outside their direct family and or social care circle.

Channells introduces us to staff, family, and most importantly a group of vibrant people who each have individual purpose but have been stymied by the institutional model that was the only option they had for many years. The audience meets the boisterous and fun-loving Fred who has a laugh that is infectious. Vlada, who is tenacious in her ability to organise and effect small acts of change in her environment. The wonderfully joy filled Valerie, who was a stage star with the group Ruckus, but sadly did not get the opportunity to move to any of the new supported accommodation homes due to physical illness. We meet two couples, one of which is Richard and Kathy, who hope to be able to marry once they are in their new home. There is the story of Greg who learns to overcome his fear of dogs to become a volunteer at The Lost Dog’s Home in Melbourne and perhaps one day will be able to own a dog of his own. And there is Rosie, whose great joy is to have her own pink room with a pink chandelier.


Such desires seem like nothing for the able bodied. To choose what kind of light fitting you want in your room is such a mundane occurrence that it would unlikely take more than a couple of hours flicking through design catalogues and websites for the model you want. For Rosie, moving into a new house is the first time she has been given the choice of how she wants her environment to be. Leaving Allen Street reminds us that from choosing a light fitting to the decision to be intimate with a partner are levels of decisions that institutionalised people with disabilities are often not considered able to make – yet as the film proves such decisions are vital for our basic humanity in western culture.

Dave Made a Maze Review

Funding for the new homes under the name of OC Connections took ten years from the go ahead to the realisation of the project. The disability sector is notorious for the amount of red tape that people have to trip over, but Channells and her team focus on the dedicated workers led by Vicki Haynes who over the course of the documentary irrevocably change the lives of the residents for the better and do so with heart and sincerity. As they finally move into their new homes, each built for purpose, one of the workers notes the difference that having people out of institutions makes “You used to do things for people,” she says, “now you do them with them.”

I am the sibling of an adult with profound physical and mental disabilities. My mother made the choice to keep my brother at home with her, despite extreme hardship, because at the time there were no places like the purpose-built homes that OC Connection provides, her only option was an institution in a city miles from where the family lived. Leaving Allen Street spoke to me in a way perhaps it will not speak to other audience members. For me there was a certain amount of scepticism I had to overcome as to how the documentarians were going to show the subjects as well as with how the story would unfold. Importantly they made time to let the audience meet the residents and see them as individuals, some of whom are eminently capable of living very independent lives, but it was also important that they spoke to some of the parents and families to give the audience a sense of how society at the time viewed people with intellectual disabilities. One set of parents speak about their son who has cerebral palsy and how parents would pull their children away from him as if he was contagious. This moment rang so true for me as I have seen over the years the way people looked at my brother. Attitudes are changing, but the change is slow and it’s only when people with disabilities are integrated into mainstream society and given the same kinds of choices and agency as the able bodied that we move forward. Leaving Allen Street made the point with sensitivity and alacrity.

What began as a short promotional video for OC Connections has ended up being an important film on how integrated socialisation of people with intellectual disabilities is not only a positive step for them in their personal development, but it’s a positive step for society in general. Leaving Allen Street is an important film as it reminds us that there are those we leave behind that are more than ready to be a part of the world. As Channells says in her interview with Andrew F Peirce “It’s up to us to come to them.” The film shows just how joyous that coming together is. A wonderful piece that doesn’t shy from the difficulties that the residents have faced, but also shines a light on a future that speaks to the notion that we all deserve to live our best lives on our own terms and be celebrated for what makes us different and embraced in what makes us all human. Thoroughly recommended.