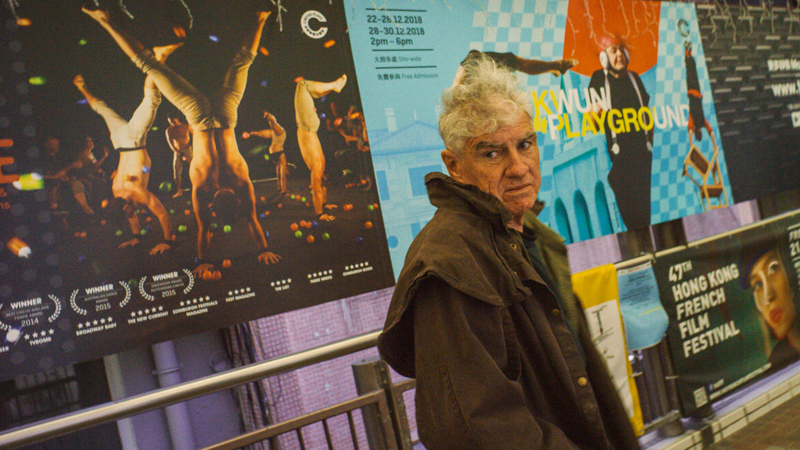 Christopher Doyle is a pioneer of cinematography in Australia and the world, who continuously attempts to live outside the rigid norms that society deems fit as seen in Ted McDonnell’s latest documentary, Like the Wind. Doyle was born into a suburban home in Australia at a time when the country was perceived by the world as a provincial outpost with nothing serious to say within the domain of the cultural arts. However, Doyle’s fervour for books, particularly those which were regarded as illegal by censors, drove him to discover new boundaries and challenge the stagnation of culture apparent in Australia at the time.

This urge to exist on the margins is also channelled throughout the countless number of feature films he has worked as a cinematographer on including independent, Hollywood, Australian and an extensive collaboration with Hong Kong auteur Wong Kar-wai. Doyle is interviewed throughout the entire documentary describing seminal moments throughout his journey, dishing out wisdom in a wise and frank way. At one moment early on, whilst describing his ambitions for becoming a cinematographer he repeats the same rhetorical question he once asked himself, “do you have something to say? Because if you don’t, who will listen?” His statement rings true of his ambitions within filmmaking to push the envelope working with a wide variety of directors and projects across the world from India to Hong Kong.

One of the most enlightening components of the documentary is the way in which it reveals Doyle’s ongoing collaborative relationship with Wong. Throughout the film we watch recorded footage from a gallery q and a with Wong as he narrates his challenging but friendly relationship. These interviews are intercut with footage from the films like Chungking Express and Ashes of Time. The films disjointed ordering means the audience skips around different periods of Doyle’s career. This non-chronological ordering compliments the frenetic energy of Doyle’s character which we see in interviews.

Weaved throughout the interviews with Doyle are champions of Australian cinema like Phillip Noyce who emphasises the impact Doyle has made in Australia. Whilst Australian cinema and film culture appear dear to Doyle, he does stress that the model in which Australian cinema is produced isn’t viable. Using the example of government funding, Doyle explains he would most likely be making one movie every five or seven years rather than the multiple projects he takes on board. In his true cut-throat and savvy way Doyle promotes the idea of just getting out there and making it. You can’t wait to create something and it’s a mantra which Doyle has lived by throughout his illustrious career which is the focal point of Like the Wind.