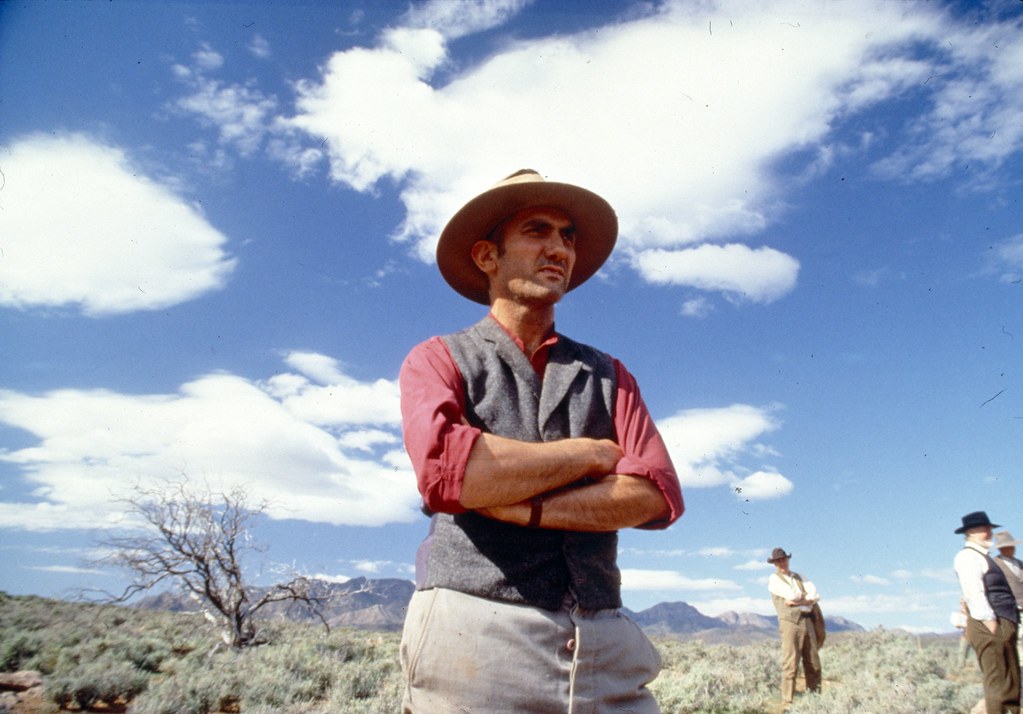 One Night the Moon Review – A Thematically Relevant Outback Opera

Amidst the deceptive darkness of the wide open outback, the moon hangs high in the sky like a beacon, luring a young girl from her bedroom and into a world she knows little about. Startled out of her slumber, her mother wakes in fright, rushing to her daughters room to find her gone. Come morning, the police have arrived with a search party who intend to scour the land for any sign of the missing girl, but their Indigenous police officer is denied the chance to help track the girls’ path. The girls father has claimed this land as his own, and through a profound act of racism, he rejects any help from the black tracker. The all white search party forge a path through the wide plains, all the while the Indigenous tracker laments that they’re heading in the wrong direction. Days turn into nights, and nights turn into weeks. The girl is nowhere to be found. Exhausted and desperate, and yet all too late, the mother turns to the tracker for his assistance. The two find the girl, her life consumed by time and disorientation. Upon hearing this news, her father walks off into the night, distraught, blaming himself for not finding his daughter, and through the power of a shotgun, claims his life. The tracker and his family mourn the mothers’ loss, her left alone and desolate on this unforgiving land, with only the memory of her dead family to keep her company.

This is Rachel Perkins outback opera, One Night the Moon.

Inspired by the life of Alexander Riley, as told in the documentary Black Tracker (directed by his grandson, Michael Riley), this is the story of a tracker who worked with the Dubbo police in the early 1900s, helping them find criminals and missing people. Unlike the documentary, Perkins opts to focus predominantly on a family of white farmers, as portrayed by real life family, Paul Kelly, Kaarin Fairfax, and their daughter, Memphis Kelly. The ever reliable Kelton Pell delivers one of his first film performances as the tracker.

Coming in at a brisk 57 minutes, One Night the Moon is deceptively slight. This is a narrative we’ve seen told countless times over and over, especially in the Western format: A family loses a child and due to their racist roots, they distrust the Indigenous peoples guidance and help, and in turn, the family suffers a great deal when their child is found dead. But, what sets One Night the Moon apart from similar narratives is the use of music to help weave this narrative. With songs written by Paul Kelly and a score by Kev Carmody and Mairead Hannan, the music by itself is quite beautiful to listen to. When paired with the immersive cinematography of Kim Batterham, the two work in harmony. Batterham’s camera captures the darkness of the narrative with the grand deep blue night skies, managing to perfectly portray the enchanting quality of the moon itself.

The ‘lost child’ narrative has been one that has long been fostered within Australian cinema – Picnic at Hanging Rock and Walkabout are notable entries in this subgenre. The constant that links these films together is how alluring the openness of the outback can be, operating like a silent siren, beckoning these (often white) children into their grips and delivering a cruel injustice unto them. Death, trauma, or a grand enduring mystery, envelops these characters, with their misunderstanding of this harsh landscape being the key to their downfall. While Picnic at Hanging Rock and Walkabout mainly focus on the children themselves, One Night the Moon opts to engage in the fallibility of the father.

As a director and co-writer, Rachel Perkins appears to recognise how slight the narrative may appear, and leans on the most pertinent theme of the film: the distinction between a connection to country versus the ownership of land. This is most powerful presented in the song ‘This Land is Mine’, which comes early in the film, setting the tone of ‘us and them’. Paul Kelly’s farmer Jim Ryan makes haste onto his land in search of his daughter with his troupe of white men by his side. He powerfully declares as a statement against Kelton Pell’s tracker that ‘this land is mine’. He paid a deed, he has established his home, he is the owner of this soil and what exists on it. He’s exhausted, toiling on a land that openly rejects any kind of cultivation, outwardly dispelling any chance of crops or farm life to foster and prosper.

He will be damned if anyone, especially an Indigenous bloke, is going to take what is his away from him.

As a reminder to himself and as a declaration to his country, Kelton Pell’s Albert Yang sings as he walks off the property alone. This is the most powerful moment of One Night the Moon, and if there is an enduring element from this film, it is this song and the image of Pell walking proudly across his country, singing about his spiritual connection with the land. He sings, ‘This land is me’, and proudly sings about how he is one with the rocks, the water, the animals, the trees. The land is his home, and he is the land. No clearer is the connection to country made than in the lines, ‘this land owns me, from generations past to infinity, we’re all but woman and man’ and later, in a rebuttal to Jim Ryan, Albert sings, ‘this land is me… they won’t take it away from me’.