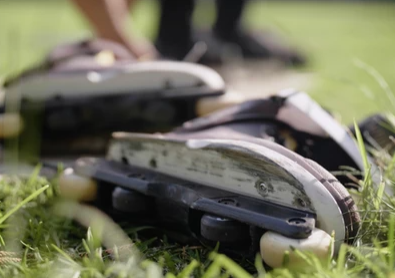 I used to love skateboarding, mainy runs on the skateboard was a regular in my youth, but sadly, the height of my skills was landing a kickflip – once. So skateboarding wasn’t a love of mine for a long time, but I sure enjoy watching it. So getting the chance to take a look at {Perspectives} Jon Julio, which is about rollerblading, certainly peaked my interest, and was something I was happy to do.

{Perspectives} Jon Julio takes a look at Australian skating (rollerblading) and the history that it has with Australia. The film uses the perspective of Jon Julio to tell its story. Jon Julio is a respected industry leader and the sports longest professional athletes, and his narration is nothing short of perfect.

Through its Julio lens, {Perspectives} Jon Julio reveals the unique influence that the Australian skating scene has had on the industry, and on skaters.

While I have no idea about the skater culture in Australia, professionally or otherwise, I find it hard to believe that I would have been as engaged in this short documentary as I was seeing through Jon Julio’s eyes.

Julio is not only a great, and well-respected artist – he is a wordsmith. Speaking on the purity of the sport in Australia because of the abundance of talent in Australia, but the lack of industry, we learn that for Julio, its not about money. It’s about the love of the sport. Of the culture. Julio also speaks about his appreciation of the togetherness of the skaters, the stories and conversations – and that skating just makes it better. The vision of Julio skating also provide a great insight into why he loves it.

But Jon Julio perspective isn’t what makes this film a special watch. The awesome, funky soundtrack by Daniel Herskedel is priceless. The way that the soundtrack pairs with the amazing cinematography really brings you into it. There was just something about the calming piano synths with subtle drums and horns that just brought me right into the film.

Finally, the skilled direction of Dom West has brought all aspects of the film together with ease. On his website, West is described as a ‘self-taught filmmaker with strong roots in extreme sports productions’, and that he uses cinematography to tell stories.

Dragged Across Concrete Review – A Tremendous and Impactful Film

On both fronts, West’s experience is telling. The cinematography is so sharp, following Julio closely as he effortlessly lands trick after trick at the skate park. Vintage style is used to help enhance the look, and it works so well – the film looks amazing.

{Perspectives} Jon Julio is a special little film and will not disappoint. The only question you will be left with is why only five minutes!