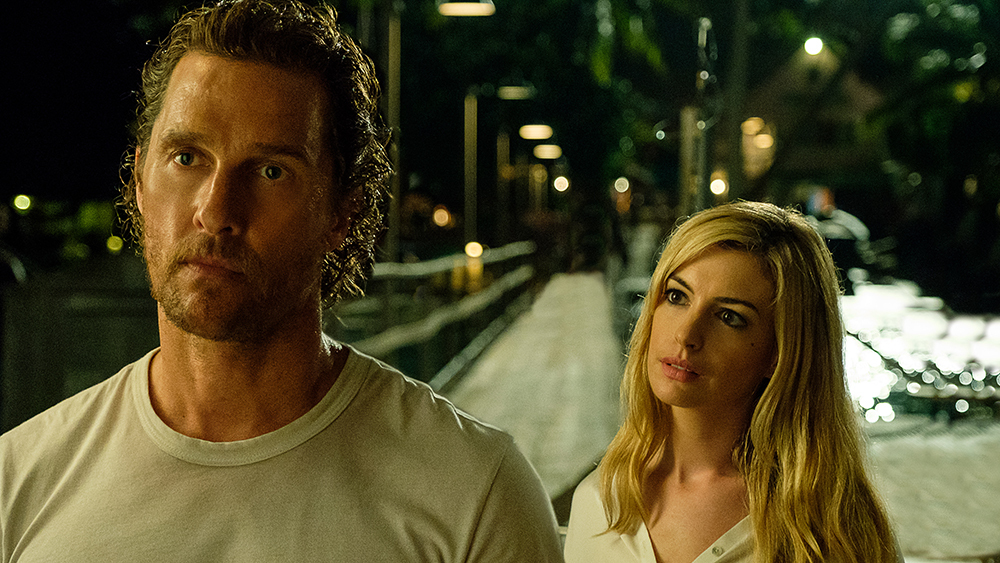 Ok, so, Matthew McConaughey is Baker Dill, a sweat drenched, eternally five-o’clock-shadowed tanned man of the ocean. In what initially appears to be the strangest adaptation of Moby Dick, Baker Dill is a dude on a mission to catch a massive tuna. It’s become his life’s purpose, especially since he’s estranged from his son and has little else to live for other than booze, fishing, and the occasional bonk with Diane Lane’s single cat lady. Baker Dill’s life plan of slaughtering this one tuna is thrown into disarray when his ex, Karen (Anne Hathaway), appears on the scene asking Baker Dill to kill her abusive husband, Frank (Jason Clarke).

Now, a lot has been made about writer-director Steven Knight’s latest flick, Serenity, and how it’s a train wreck, and how there’s a major twist that is one of the most absurd twists ever to be twisted, but as a reviewer, you review the film you’ve seen and not the criticism surrounding the film. But, before that, a small note: you often try and watch a film in a vacuum, without having read other reviews or let the other criticism creep into your mind so you can watch a film without any preconceived notions of what it’ll be. Living in Australia, with mad and manic release schedules, this isn’t always easy. So, when a film like Serenity rolls around with an Oscar winning cast from a seasoned writer turned director, and the roar of the US based film media precedes the straight-to-DVD Australian release, well, how do you stay safe in a bubble of silence, untainted by the opinions of many elsewhere in the world?

Well, it’s a little difficult, that’s for sure. I could go into a deep dive about the existential crisis that film reviewers face when it comes to reviewing films in general, and in turn, the massive crisis that unpaid reviewers face when it comes to deciding which films to review. (Sidenote: for me, I tend to avoid many of the major film releases if I didn’t go to a press screening, and then I just wait for the positive reviews to roll in. If it’s positive enough, then I’ll check it out.) But, really, all I’m doing is stalling and avoiding addressing the giant tuna in the sea that is Serenity.

I liked this film. I like it quite a bit. Yet, why I liked it is difficult to discuss because of the way the plot unfurls and slowly reveals a twist that re-contextualises the entire narrative. Some may say the twist is the selling point, and in turn, your first viewing would be greatly heightened by having the knowledge of the twist in mind before sitting down to be thoroughly entertained, but that’s up to you to decide and not me. Arguably, even if you read the twist, you’d still need to see the film itself to see exactly how such a twist would be pulled off.

Steven Knight commits to his narrative wholeheartedly, imbuing this tale of a man and a fish with all the seriousness he believes it needs. Which becomes beneficial as the narrative moves towards the grip of domestic violence that keeps Karen in a horrific relationship with Frank, and in turn, provides a narrative purpose for Baker Dill to give one of two shits about a son he hasn’t seen in an age. Matthew McConaughey relishes every second he’s on screen, applying all of his acting skills to every moment, and meeting Knight on the level of seriousness he wants.

Anne Hathaway made her own fun with the turgid Ocean’s 8 script, and like that film, reminds directors that they’re undervaluing and misusing her talents in fare that otherwise doesn’t deserve her work. She’s good here, providing the right level of reactionary fear that one is expected to have when they’re in an abusive relationship, which helps to elevate Jason Clarke’s eccentric, loud mouth, obnoxious brute. But, as a Hathaway-faithful, I can’t help but yearn for the era of Interstellar/Rachel Getting Married level performances – work that came from directors who worked to elevate her talents, rather than diminish them by loading her up with a rather mopish figure. Sure, once the conclusion of the story rumbles along, the reason behind Karen’s lack of agency is fully realised, and disappointingly eventuates into being diluted into a ‘women can’t look after themselves, so they need a man to take care of business for them’.

I really want to know what conversation Knight had with Matthew McConaughey, Anne Hathaway, Jason Clarke, Diane Lane, and Djimon Hounsou, to make them sign on the dotted line for this film. Especially when you realise that the entire point of Diane Lane’s character is to be a woman that McConaughey beds, all the while she looks for her cat. Djimon Hounsou is good, especially as he manages to out-stubble McConaughey and looks very handsome doing so, but his character is relatively pointless.

I’m glad that Serenity exists. I’m glad it has the star studded cast it does. I’m grateful that the cinematography by Jess Hall looks as great as it does – with the wide ocean being realised with all shades of blue. I’m left excited by the performances from Matthew McConaughey and Jason Clarke, while equally being disappointed with the average material that Anne Hathaway, Diane Lane, and Djimon Hounsou are loaded with. This is high concept stuff that sinks just a little more than it swims, but when it swims… by gosh is it great. 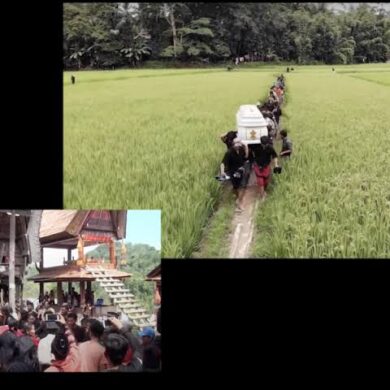