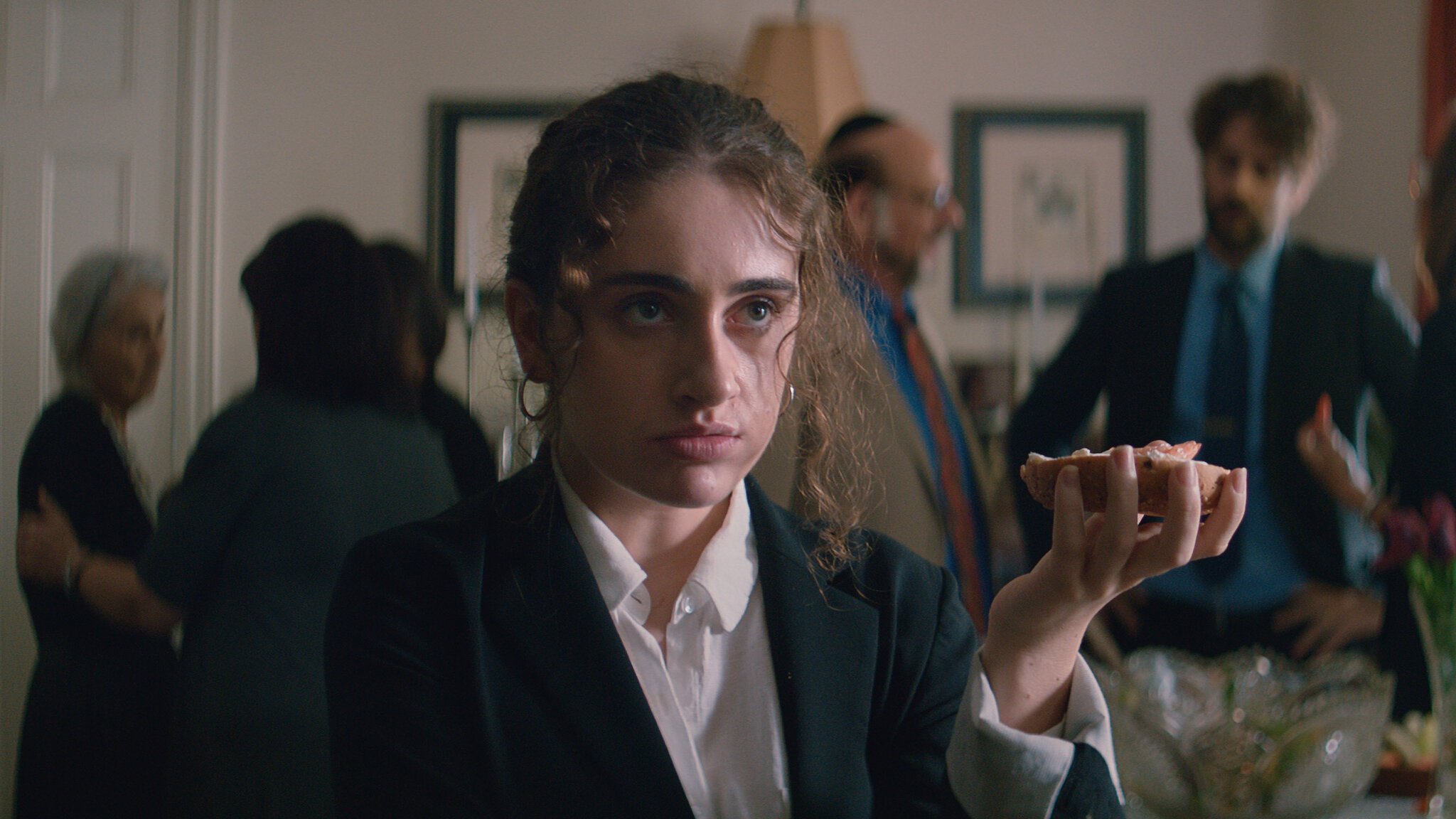 
Wakes aren’t often considered places of riveting angst or harrowing self-obsession, quite the opposite. However, Emma Seligman’s latest film Shiva Baby refashions the suspense-driven style repurposing those tropes in order to turn them into anxiety-inducing scenarios. The film centres around Danielle as she attends a shiva with her overbearing mother and father for a vaguely significant yet also distant relative. Danielle, played with incredible fragility by Rachel Sennot (a breakthrough talent), is a young gender studies student who works as a sugar baby on the sideline, receiving an income from clients for sexual favours.

The thrust of the suspense and anxiety which Seligman is able to conjure emerges from the dread that Danielle’s prom date and ex-girlfriend Maya, Molly Gordon, is there as well as Danielle’s sugar daddy, Max (Danny Defferrari) whose wife Kim (Dianna Agron) and infant child arrive later. Maya acts as the direct opposite of Danielle having graduated Law school and working towards something of a “tangible” career. Danielle is a drifter – uncertain (in a very millennial way) of what her future may look like. Receiving little, if any, autonomy from her parents alone who have access to her bank account, it appears Danielle is anything but grown up as much as she would like to believe she is.

Shiva Baby shows that humans are infatuated with ourselves and highlights this through the vanity of all the characters. This recurring theme of self-obsession adds to the drama of the film as none of the characters appear to sense what is occurring right in front of them. This is most clearly accentuated by Danielle’s mum, Debbie (Polly Draper), who talks with another mother and grandmother, attempting to justify Danielle’s choice to complete a gender studies major and still be single. The mumbles of puzzlement and looks of self-contained confusion from those listening suggest Danielle’s lifestyle decisions don’t belong in this self-proscribed “loving” and “progressive” community. Danielle is frequently caught exhibiting her own self-obsession by judging Kim as boring and labelling her a girlboss, referring to her need to have three businesses as an example that the “other two must be failures.” Such attacks suggest that she has her own unresolved conflicts about herself.

Paramount to Shiva Baby is the sense of claustrophobia which is consistent throughout the movie. Seligman does a fantastic job using economical techniques and effects in order to create this feeling. This is seen through the rapid cutting, often occurring during dialogue involving circles of characters, in which the camera spirals around the ring growing closer to each of the characters faces as the scene progresses. The minimal score which features an almost repetitive series of plucked strings on a violin is jarring and moody and the deliberate colour grading, at times removing hues of blue, adds to a sickeningly painful result.

Seligman has crafted a sophisticated debut feature film which was inspired by work on a short film she made at New York University. Shiva Baby can be seen to owe itself to a trend in filmmaking at the moment which emphasises the mundane to the point that it becomes suffocatingly bland. A recent example can be seen in the similarly New York oriented filmmaking duo of the Safdie brothers. Their films often focus on everyday characters who spiral into uncontrollable chaos, building tension and momentum which snowballs into engrossing scenarios.

Seligman has quoted the influence of John Cassavetes, another darling of American independent cinema, referring to the importance which “the horror of the mundane” played for him when producing movies. Whilst Cassavetes is regarded as the protégé of independent filmmaking, financing movies through his own acting career, his imprint was made also on a technical level. Using sets which were malleable and crew which were often film school students Cassavetes reinvented the way in which filmmaking could be done in America and further abroad. It feels like the stamp of Cassavetes is prevalent in this movie in more than just a technical way. The large, colonial house somewhere in what appears to be upstate New York is reminiscent of Mabel Longhetti’s (Gena Rowlands) home which she frenetically dances in, against the will of her husband in Cassavetes’ A Woman Under the Influence.

Mabel’s longing to be free and understood for who she is also mirrors the repressed desire which is an undercurrent of Seligman’s script. Seligman shows that Danielle’s inhibited bisexuality and profession as a sex worker can’t be mentioned or confessed to anybody present because of the foreseen shame which may be attached to it. Her double life is further emphasised in the scenes involving Max in which the dramatic irony leaves the other characters confused as to how the two actually know one another.

Seligman is not fooling anybody at the moment – she is a very talented filmmaker. Shiva Baby is testament to a whole generation of filmmakers emerging at the moment who are writing, directing and producing cinema which reflects their lived experience. The precariousness that millennials find in the world left to them from the baby boomer generation is a point of conflict and one which is ruminated on in this movie.