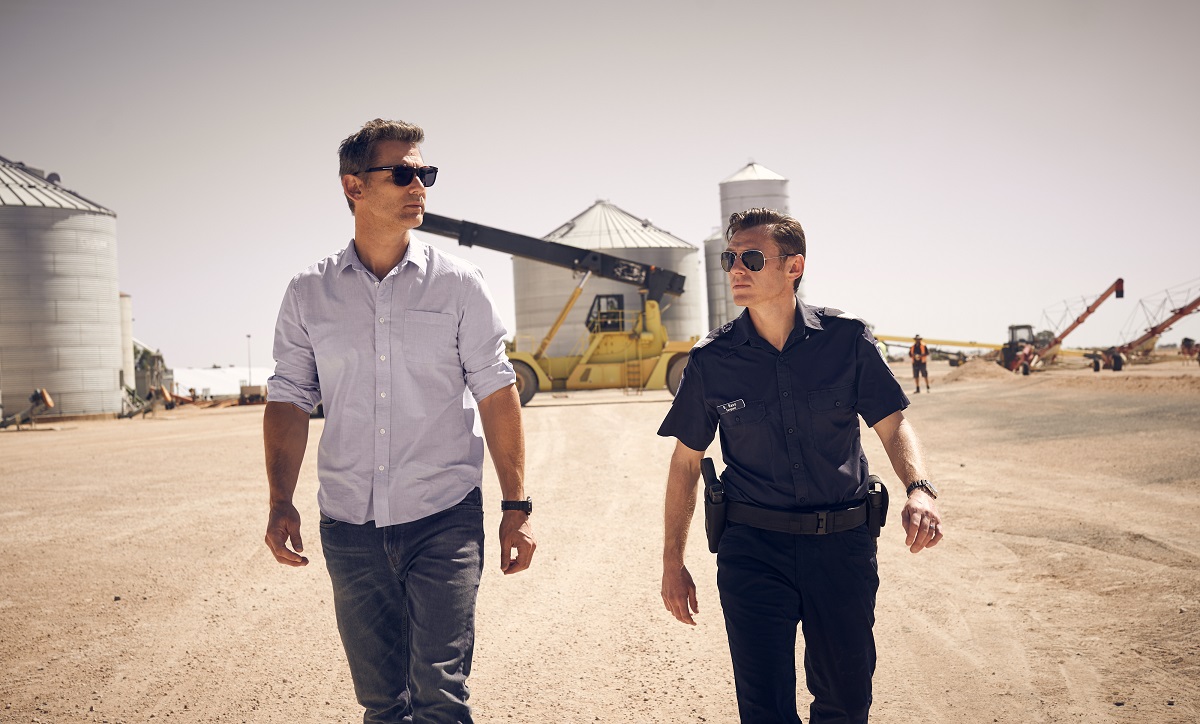 The Dry Review – A Towering Achievement, A Damning Condemnation of Morrison’s Australia


Robert Connolly’s masterwork thriller, The Dry, transfers Jane Harper’s best-selling novel to the silver screen with great ease and jaw-dropping power. Eric Bana’s federal cop Aaron Falk returns to the fictional rural hometown of Kiewarra, Victoria to attend the funeral of childhood friend, Luke, who died in an apparent murder-suicide event that also claimed the life of his partner, Karen, and son, Billy. Yet, not everything is as it seems, with both Aaron and Luke’s friends and family believing him incapable of such an act against his family. As with the novel, Aaron’s past is revived, with him having to revisit the tragedy that caused his expulsion from his hometown.

The tense uncertainty that lingers over every scene is heightened by the flashbacks to the younger versions of Aaron (Joe Klocek), Luke (Sam Corlett), and their girlfriends, Gretchen (Claude Scott-Mitchell), and Ellie (BeBe Bettencourt). The jovial friendship the four share is tinged with toxic masculinity, as Luke pushes ‘play’ too far by holding Ellie under the water when they visit a local swimming hole. While Gretchen, Ellie, and Aaron voice their frustration with his actions, there’s little change in Luke’s behaviour. In many ways, his behaviour becomes atypical of the actions that are often defended as ‘boys being boys’, a misguided statement that encourages reckless behaviour. Luke’s noxious action is tinged with an unwavering darkness when we learn of Ellie’s death by drowning, once again suggesting that Luke is capable of great violence and that he may have in fact taken the life of his family decades on.

Steeped in real tragedies that have become all too frequent in our modern society, The Dry excels in peeling back layer upon layer of complexity that informs its central mysteries. If Luke did kill his family, then why did he do it? And, if he didn’t, then what drove the heinous person who did to do so?

Unlike American cinema, Australian films are surprisingly free from pointed commentary directed at the political leadership it was made under. Where films like BlackKklansman or Borat Subsequent Moviefilm exposed the impact of the 45th American President’s reign for being the destructive tyranny that it was, in Australia we were still playing catch up with decades of unaddressed history and systemic injustice, with films like Sweet Country and The Nightingale becoming acts of condemnation for the Australia of the past and the present.

When it comes to The Dry, the explicit manner that Connolly and co-writer Harry Cripps transfer the page-turning tension of Harper’s text into a condemnation of the overarching political machinations of the Abbott/Turnbull/Morrison governments is one driven with a fury and desperation rarely seen in modern Australian narratives.

At once, an askew drone shot of a drought-stricken paddock reminds the audience of the continued governmental inaction on Climate Change. Later, we see the once vibrant river, full of water and brimming with life, transformed into a dusty ravine that swallows a stunned Eric Bana. Echoes of the devastation wrought upon the essential life source that is the Murray-Darling basin ring through our minds. The local pub has the sound of chatter drowned out by the incessant artificial chimes of the fluoro-soaked pokie machines that drain any and all savings from the pockets of the townsfolk. To stay alive, the local school has to fight for funding opportunities, battling for improvements to keep the only school for kilometres going.

We see the weight of grief that hangs over an aching town that is gradually buckling under the weight of pain upon pain upon pain. The remote town of Kiewara is a farming community brought to its knees by incremental acts of devastation, and this excoriating act of violence only amplifies that pain, forever changing everyone in the town. With Robert Connolly working at his peak, he ensures to paint the reality of every struggling Aussie outback town in the reflection of Kiewara. Each stroke shows another aspect of government inaction and distancing from our elected leaders. We can hear a faint ‘I don’t hold a hose mate, and I don’t sit in the control room’ on the wind, carried upon the smoke-tinged-breeze from the distant fires that loom perennially on the horizon. Connolly doesn’t need to enact a pointed criticism of the Coalition government, the world he has created presents enough condemnation to fill a mighty tome of fury-laden text.

While the ‘problem in a small town’ trope is becoming tired and well-trodden, Connolly finds freshness and vitality within this drought-stricken landscape, where the inhabitants are increasingly pushed to their limits, sizing up whatever way they can stay alive. With the spinning wheel of the murders unfurling in a freewheeling fashion across the town, we see key characters possible motivations, ranging from the monetary, to the vengeful, to the eradication of a farming neighbour to purchase their now-absent property. Each red herring has a logical undercurrent to their reasoning for wanting to have Luke and his family dead, amplifying the continued belief that anyone is capable of having murdered in cold blood.

Yet, while the mystery is investigated by the weathered Aaron, the lingering realisation that Luke might have actually killed his family hangs in the air. The realm of possible violence that hides within each man is exposed completely here, and while the truth of Luke’s actions is best left discovered by the viewer, it’s honourable that Connolly never wavers in presenting an apprehensive view of Luke and his life actions.

Performances across the board are stellar, with Eric Bana affirming his status as one of the most versatile Aussie actors. Bana manages to slip between comfortable charm and concern, all the while presenting a disarming air of untrustworthiness over his dedication to a lie he told as a young man. As the city-dweller returned home, he feels suitably out of place, while also feeling like someone returning home for the first time in a decade.

Bana is supported by an impressive supporting cast, with a who’s who of Aussie cinema showing why they’re the respected professionals that they are. As the lynchpin to the B-mystery, BeBe Bettencourt is superb as Ellie Deacon, imbuing her with a warmth and depth that shows why the town would be mourning her death years later. Matt Nable carries on his impressive filmography with a broken and unhinged man of the land who feels continually on the same precipice that everyone suspects Luke was on. Eddie Baroo brings a comedic touch to the film with his charming bar owner. Miranda Tapsell once again reminds audiences why she’s the great MVP Australian film and television has right now, with her comfortable presence as Rita informing why her character cares and worries about her police officer husband, Greg (Keir O’Donnell), so much. Genevieve O’Reilly, James Frecheville, and Joe Klocek, additionally bring a unique presence to the complex narrative at hand.

But if the films belongs to one person, it would be Keir O’Donnell’s overstretched police officer Greg Raco. As Kiewara’s sole law official, Greg was the first on the scene at the home where the murders took place. The toll that this takes on Greg is visible in the eyes of Keir O’Donnell which contain deep pools of trauma and stress. In a pivotal early scene, Greg takes Aaron through the house, describing what he saw when he arrived at the scene. The cries of the surviving baby hang in our mind as Greg struggles in the hallway with the weight of what will never escape his minds eye. Aaron coaches him on receiving counselling and support, and Greg offhandedly says that he’s getting the care he is prescribed after such an event, but the tone of his voice suggests that no amount of counselling will make the night sleep any more comfortable or easier to endure.

If there’s a criticism of The Dry, it’s the length that Robert Connolly pushes the depiction of the violence in the revealing third act. We have sat with the knowledge of the tragedy throughout the film, having seen the blood-spattered walls, watched the funeral take place, and witness the weight upon the minds of the townsfolk, and, most importantly, seen through the eyes of Greg the impact this has had on everyone. In a moment where he should have exercised restraint, we see the family, including a wife and son defined by their death, terrifyingly murdered. We already knew what went on in the house on that fateful day, and have weathered so much that it feels excessive to push the audience and the characters through the imagery of the crime playing out.

While, in the moment, I felt frustration, I also understand Connolly’s creative choice here to depict the act, noting as it tumbles out of control that the perpetrator is a familiar face, one who is your friend, your neighbour, your family member. In this chaos of bloody terror, The Dry pulls a taut line between government decisions and the manner that they inform our own personal choices. We are all responsible for our own actions, but the decisions we make are influenced by the world we live in, creating a feedback loop that is hard to break.

This is Scott Morrison’s Australia reflected back at him in a venue that he would never dare set foot in, and if he ever did so, he would see an Australia that is distinctly foreign to him. At its quaking conclusion, The Dry left me shaken and devastated. This is a work of monumental importance, a towering achievement of Australian cinema, with the affirmation that Robert Connolly is one of the great Australian directors working today being absolutely undeniable after the credits roll.

Writers: Harry Cripps, Robert Connolly, (based on the novel The Dry by Jane Harper)