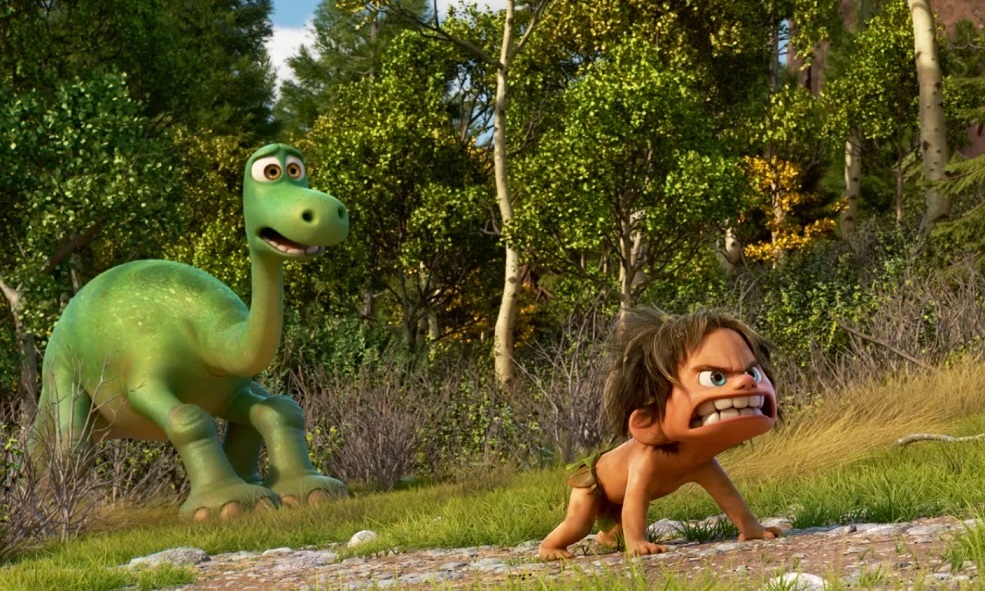 The Good Dinosaur is like the many paintings that you can buy on ‘canvas’ at Ikea. The reprint of a reprint of a reprint has worn away any sign of originality and vibrance that the original work may have had. At times, they look really quite nice and impressive, but they’re essentially flat and lifeless. The bland core is surrounded by fake beauty.

After a brief introduction to a world where dinosaurs never died, we’re shown some of the most photorealistic scenery ever displayed in an animated film. Then we’re introduced to some of the most over the top cartoon-esque characters in an animated film this side of a Minions-related film. Whoever’s decision it was to go down the path of having hyper-realistic environments paired with hyper-cartoon-esque characters is possibly scratching their heads right now (or, they’re mighty pleased with their work). We’re introduced to Arlo and his siblings as they crack out of their shells. Arlo isn’t very good at doing a heck of a lot, and after a series of events, his Dad becomes irrate and tries to force him to do something he’s not comfortable with. After a storm hits, Arlo is separated by his family and is on a journey by himself.

That, in a nutshell, is what The Good Dinosaur is all about. Well, that and a huge retread of classic Disney tropes. These well worn Disney tropes (son goes on a journey by himself to ‘learn a lesson’, loss of a parent, voiceless companion) are so overused here that it simply creates a very tired film that takes it time getting to the ‘emotional beats’ that it feel it needs to tick off. Take for example the central ‘separation’ of Arlo and his family, this occurs about a third of the way through the film after some exceptionally tedious and boring ‘work around the home’ sequences which are neither entertaining, informative or even mildly comedic.

Then the film takes another forty five minutes to introduce us to some of the most intensely boring characters to exist in a Pixar film. Say what you will about the previous ‘worst Pixar film’ Cars 2, but at least on some level the characters of Mater, Lightning McQueen and Finn McMissile were entertaining. Here, the characters float in and out of the scenery in a manner that you’d be hard pressed to even remember that they were there at all. Take the triceratops-like character who blends in with a forest. Whilst he’s a fine looking character, he simply does nothing, has no ‘educational’ point, and exists to merely occupy five minutes of screen time (oh, and possibly sell another toy down the line as well) – I’d be hard pressed to remember his name, or even any of the T-Rex’s and vulture like pterodactyls later on. Heck, if the voiceless human sidekick weren’t given as exceptionally generic a name as ‘Spot’, I’d have forgotten his name too.

Pixar films are usually filled with three dimensional characters who feel like they exist in a world that spreads further than the confines of the movie screen. Where Pixar have previously created worlds where we could believe that a robot perpetually cleans the world after all the humans have disappeared, or where toys live full lives whilst humans aren’t around, or heck, even a fully hierarchical bug world where Kevin Spacey is a grasshopper, they seem to struggle to make a world where dinosaurs didn’t go extinct believable. The Good Dinosaur’s characters exist solely to teach a life lesson and move on; life lessons that have been ‘taught’ in much better Disney films than here – The Lion King (the stampede is xeroxed as a storm here), Finding Nemo (the ‘let go of your fears’ is ripped straight from this infinitely better film).

Many many years ago, Disney created an ‘end of times’ dinosaur film, creatively titled Dinosaur. In the lead up to that film, there was a lot of discussion about whether the dinosaurs were going to be voiced or not – in the end, they opted for adding voices to the characters; a decision which I’m not sure entirely worked for the film. I mention this because about twelve months ago, the original voice cast for The Good Dinosaur were thrown out with the bathwater and a new voice cast was trundled in. For the most part, they do a fine enough job, but really, they’re not given all that much to work with with cookie cutter like dialogue that feels like off cuts from previous Pixar films glued together to resemble some kind of ‘logical sense’. For example, a line from Arlo’s dad to him, ‘you have to get through your fear to see the beauty on the other side’. Maybe that wasn’t a rejected line from a previous Pixar film but instead an upcoming inspirational poster from Ikea.

Whilst the disconnect with the character design and the superb environment design immediately got my offside with the film, I was later confused by the random moments of pure terror in the film. Whilst I’m always a fan of a dark moment or three in a kids film, I was surprised at how exceptionally bleak some of the moments here were. On one hand, I applaud the devouring of a live animal (animated, of course) in one scene, yet in the other, I gasped at the line of dialogue ‘I can’t wait to end you’ from the same villain to Arlo. Disney films have managed to pepper their films with believable moments of tension that are both rewarding to the viewer as well as fit in within the context of the story. Take the trash compactor sequence from Toy Story 3 for example – it’s a terrifying moment where the characters are in peril and near certain death, yet, it plays into the themes of the film superbly and makes sense within the realm of the film. Here, the moments of tension appear too often and thus bring the overall mood of the film down whilst not actually adding anything to the film overall.

After all, this is a kids film through and through, and whilst that is usually the case for the majority of Pixar’s output, they usually have designed them to be suitable for both adult and children viewers. The adult jokes that exist would usually go over the kids heads, yet, not to the point where kids wouldn’t find the film funny. Here, jokes about hemorrhoids and a scene where two characters trip out on berries fail to mesh well with the look and feel of the film. There’s no whimsy here, but there is also no sense of fun or excitement. I almost wish that Pixar had doubled down and instead of having those comical elements went for a full blown drama (something that doesn’t seem to exist all that often in the realm of kids films).

It would be something these moments of terror existed to prove that this world of dinosaurs is dinosaur eat dinosaur world, but it doesn’t even manage to convey that message all that well – especially given the fact that all the dinosaurs are frontiersmen of some sort. I understood head of Disney’s – John Lasseter – admiration and love for early America in Cars as an analogy for the death of the small town in America thanks to highways, but here the buffalo herding and farming simply just does not work with the creatures on display.

As it is, The Good Dinosaur is occasionally a visual feast that makes me excited to see what The House of Woody will do with the upcoming Finding Dory, but is often a tedious bore that can’t help but be overshadowed not only by the often superior output of Pixar, but also the decades of great animation that Disney has created. If I were to call this minor Pixar, I would be being too kind. I would prefer to watch Cars 2 five times over before ever having to watch The Good Dinosaur once more. Bland characters, slow meandering story lines and off putting character designs do not a good film make. (Although, besides the character designs, it is a mighty fine visual feast of a film.)

(I should also note, that whilst I wasn’t the worlds biggest fan of Inside Out, it’s mighty hard for a film like The Good Dinosaur to come out a mere six months after that film and be ‘good’. It would have been wiser to have delayed this film another few months to save grace. But, then again, releasing it any time of the year won’t stop it from being a bad film.)

One element which I find slightly perplexing is the title of the film – ‘The Good Dinosaur‘. Whilst it can be seen that Arlo is essentially a ‘good’ dinosaur because, um, he doesn’t eat other dinosaurs (eh?), he’s an awkward creature that is weak and kind. There is a disconnect between the title and the characters arc that belies the general awkwardness of Arlo. What exactly sets Arlo apart from any other ‘good’ character in the Pixar lexicon? The fact that he’s a vegetarian? The fact that he doesn’t kill other creatures? This in itself makes no sense when we later meet the family of T-Rex’s who are, in essence, ‘good dinosaurs’ who partake in free range farming and help others in need.

Whilst the film doesn’t have an agenda, it almost feels as if it very well should have done. If the film were a little more focused on something like, say, the promotion of being a vegetarian, then the film may have had a stronger narrative through line. In 2013 there was a change over of director, a move which also pushed the film from its 2014 release to 2015. Whether the previous version of the film had a stronger thematic push or not is something we’ll never know. I do wish though that the title were reconsidered as it simply is not fitting within the context of the film – does it suggest that all other dinosaurs are evil, uncaring individuals? It’s an odd title which simply doesn’t match up with the flawed main character. 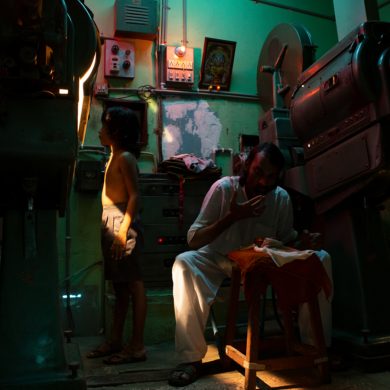