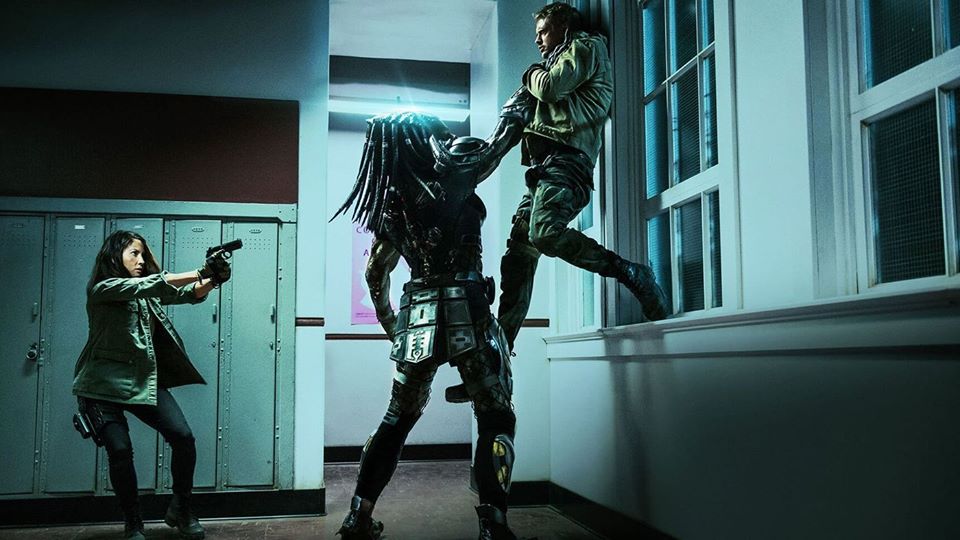 The Predator, written and directed by (the usually unbelievably talented) Shane Black (Kiss Kiss, Bang Bang, The Nice Guys) is a complete shambles. In fact, so much so that I sat in the cinema until the credits finished rolling wondering what the hell I had just watched. Another group of lads also stayed and were still in their seats when I left. I can only assume they were in mourning.

The film is based around a Predator that has gone rogue from his species. The opening scene consists of his spaceship dodging laser bullets from another, larger spaceship before jumping into hyper drive and getting out of there as quickly as possible. Upon arriving in Earth’s atmosphere, the ship collides with a satellite before crashing. The Predator is then taken captive, only to escape later and go on the look out for some of his tech that was stolen by a soldier named McKenna.

Boyd Holbrook stars as Quinn McKenna, an army ranger sniper who is on mission when the alien space ship coincidentally crash lands almost right on top of him. He has a quick encounter with The Predator before pinching some of the alien’s tech for proof of his encounter. He mails the tech to his wife’s (Yvonne Strahovski) house, but his young autistic son Rory (Jacob Tremblay), whom is home alone, receives the package and opens it up immediately. Rory’s autism coincidentally allows him to instantly understand the alien technology.

Sterling K. Brown is along for the ride as Traeger, the leader of a military unit dedicated to studying the Predator species. Traeger is a ruthless man and kills pretty much everyone who gets in his way. Olivia Munn also gets involved as Casey Bracket – a scientist that Traeger brings in to study the extra-terrestrial. Coincidentally, when things get sticky, Casey is also a weapons expert and endurance athlete. Trevante Rhodes, Thomas Jane, Keegan-Michael Key, Alfie Allen and Augusto Aguilera all star as the ‘loonies’. A group of combat vets that McKenna ends up with.

To start with the good – the loonies, Thomas Jane especially, are the only reason to go and watch this film, they are absolutely hilarious. Holbrook does what he can with the b-grade script but given the loonies were given all the juicy humour, there is nothing for him to really sink his teeth into.

Munn, whom is normally great, is a bore – her character is also poorly written and completely unbelievable. It makes no sense that she is a scientist that, as soon as the proverbial shit hits the fan, knows how to use any and every weapon that falls in front of her – alien tech included. In another sequence, she is left behind as a craft flies at least 5km or more away but as soon as the craft crashes back to the forest floor – she has somehow kept up and is waiting below. Sterling K. Brown is also a bore, his character just laughs his way through every incident with McKenna and encounter with the Predator – he’s confident if nothing else though.

The film has plenty of action, there is no denying that. Sadly the bad of it is that most of it is McKenna and his guys fighting amongst themselves or against Traeger and his guys. The Predator is almost an afterthought in the film with very little use of heat vision and almost no use of the invisibility cloak, and almost no hunting. McKenna, Traeger and an ultimate Predator spend more time tracking the Predator than the Predator does doing any hunting. It was quite dissatisfying.

The ugly mutha of it is that any hunting by a Predator is done in the last 15 minutes of the film – where he uses a translator to speak English and tell McKenna and Traeger that they have a 7 minute “time advantage” before he will begin to hunt them. It was still rather boring, as almost every death was predictable – even if they were gory.

Another terrible scene was the sequence featuring the Predator dogs. One is killed instantly and the other is injured straight away also. Once injured it seems to drop all of its aggression and fighting instincts and starts to play fetch on command like it had been doing it for years. It was completely ridiculous.

We later find out that the reason the Predator went rogue and risked his life to get to earth was to – give us technology that will save us from future Predator attacks. He spent his first 5 minutes on Earth slaying humans and another 10 minutes killing scientists and soldiers in a laboratory to then give us tech that can save us from Predators. It is actually as stupid as it sounds.

A while back, after the first trailer for The Predator was released, I tweeted director Shane Black to say I wasn’t too impressed, but I trusted the impressive Kiss Kiss, Bang Bang director to kill it – and indeed he did. He killed it. He killed the franchise so badly that I will probably not waste another bit of my well-earned salary on another Predator movie ever again.

Pickup The Predator from Amazon here if you’re still interested after this review.