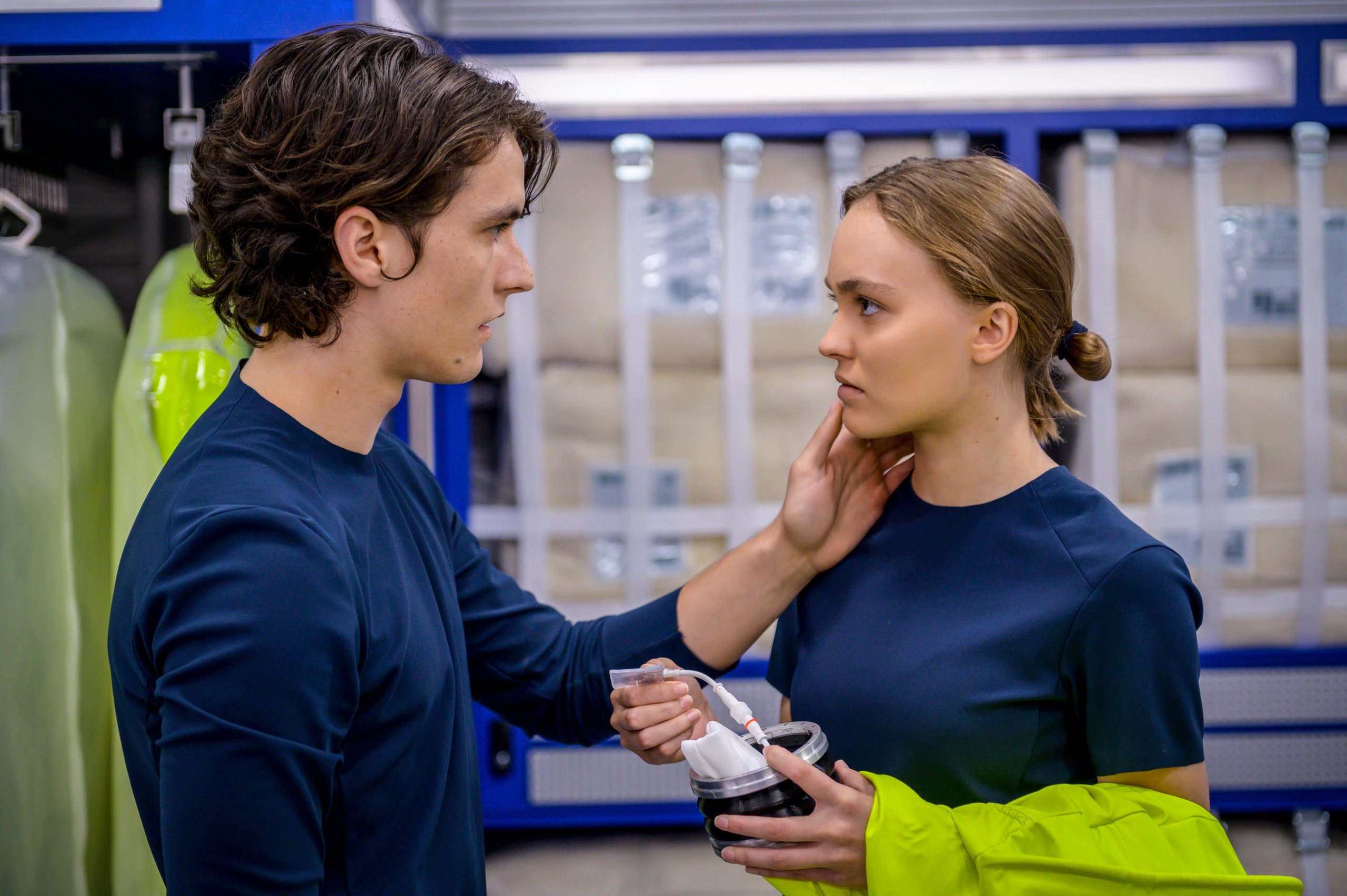 
Written and directed by Neil Burger (Limitless, Divergent), Voyagers stars Tye Sheridan, Lily Rose-Depp, and Fionn Whitehead, amongst others, as a group of lab-birthed men and women who have been cultivated by Earth’s scientists to only know and live in the confines of a spaceship environment, training them to undertake an 86-year mission to a new planet in the far reaches of space capable of supporting human life. The group of young men and women are guided by Colin Farrell’s Richard who acts as their teacher and father figure, going on their long voyage. On the way, however, the group discovers the truth of their existence and when Richard is suddenly taken out of the picture, the group rapidly learns every major and terrible lesson about human nature.

I love surprise movies. The ones where you only see the title and poster, nothing else, barely knowing who made it or who stars in it until you are in your seat, ready to go. The lights go down, the movie rolls on, and you are on the best rollercoaster not knowing where it’s going or what’s going to happen next. I had wonderful experiences seeing Upgrade, Bad Times at the El Royale, Sorry to Bother You and Parasite this way, all becoming such memorable theatre experiences I cherish.

And then you have my experience with Voyagers which I will cherish…for a very different reason.

You see, Voyagers is one of the dumbest and unintentionally hilarious movies I’ve seen in a while. I think the last time I had this much fun witnessing idiot characters make the dumbest decisions possible and the filmmakers treating it all as super-serious content was maybe 2018’s Life Itself or Tranformers: The Last Knight.

For starters, and maybe my only point of full-blooded praise, the concept is interesting. Everything takes place in the always-rich not-too-distant future, where our planet is doomed from climate change. The movie approaches the idea of our self-made destruction as inevitable, because it is. Simple, easy enough. Then throw in this idea that a journey to a “new Earth” will take 86 years, and the first generation crew will have to reproduce and create a new generation that will then create the third generation, the latter designed to be the true explorers of the distant planet. There is an intense psychological aspect at play being that if you have a crew of people on a ship whose whole purpose is merely to survive long enough to breed those who will live a future long after them, then that first generation might be difficult to train under that pressure. So the solution is to grow a whole generation of people who will only know the life of controlled ship-like environments, never wanting the open spaces and fresh air of Earth life.

The idea is interesting and could make for a fascinating exploration of human nature, sexuality, the meaning of emotion, and the ultimate futility of life when broken down into such mechanical intentions. Will we always naturally reject a constructed reality? Can human nature be taught or is it always born? It’s the kind of complex concepts that directors like James Gray and Claire Denis explored with adroit ambition in Ad Astra and High Life from only 2 years ago.

Neil Burger’s answer to his own questions is to just make “Lord of the Flies in space”, except they’re all sexy teens who reject their hormone suppressants and embrace sex and violence like they’re as simple as breathing.

Okay. Not exactly the most unique approach, but does Burger still manage to pose unique answers to the idea of human sexuality and the toxicity of our own natures? Nope. He just makes a straight-up exploitative teen movie that doesn’t so much whisper its ideas as it screams them as loud as possible into your ear in caveman language.

After Colin Farrell gets killed off, all the kids run wild, screwing each other and devolving into base instincts of sex and violence, with Tye Sheridan’s character chosen as a leader of good moral standing, but soon overpowered by the Joker-looking conspirator played by Fionn Whitehead. And Lily Rose-Depp is there as well.

I guess Burger is just trying to say that deep down we’re all just animals, but the problem is how Burger comes up with anything. If you want to make a point about scared kids resorting to primal tendencies with pack mentalities, blind beliefs in otherness and using primitive tools as symbols of dominance, then lean all the way in. Make the characters start to lose language and fully revert back to animals, making it like a reverse 2001: A Space Odyssey. Go wild and weird with this. You have the concept, but you have nowhere to go with it besides the brutally obvious and hilarious moronic.

Voyagers takes place on a poorly-designed spaceship that never looks anywhere near as interesting as virtually any spaceship interior in the last 50 years of big-screen science-fiction. How any of the characters grow to be over six-feet tall is beyond me because every location is either a tight corridor they probably repeated multiple times to save more money, or cramped rooms that look like the cabins aboard the Star Wars cruise in DisneyWorld. In general, nothing about this movie looks or feels appealing. It’s bland efficiency at best.

All the young actors are doing their best, but none of them shine beyond the boring and tired stereotypes they’re written into. Sheridan is cast as even duller version of his Cyclops from X-Men: Apocalypse and Dark Phoenix, Lily Rose-Depp is relegated to a moping and tired-eye bore that drags down every scene she’s in, Fionn Whitehead at least leans into his one-note antagonist, and Bran from Game of Thrones and the guy from Blinded by the Light are thrown into the mix for true wasted measure. Everyone fits into these neat and stupid little boxes of teen movie clichés that only needed a synth soundtrack and a big prom finale from being perfectly awful.

All of this is masking the fact that slowly, piece-by-piece, scene-by-scene, Voyagers gets dumber and dumber. Farrell’s character is killed by what looks like an alien shadow in space, everyone fears for their lives, nominate Tye Sheridan as the leader, start screwing and beating one another, the alien turns out to have been a red herring for Whitehead’s character committing murder, Sheridan points this out, but somehow mostly everyone believes in Whitehead instead for no reason and they set out to try and kill whoever they want because “they have the alien inside them”.

Then, Sheridan tells Lily Rose-Depp that Colin Farrell told him about “the weapons room”, which he finds by sneaking through a wall compartment and tries to get into but he forgot the passcode and leaves. Whitehead’s crew finds the secret door and somehow easily manages to pry open the door to a room full of laser guns with no trouble. Then a bunch of nonsense happens, a few more people die, and the big finale hits where it’s obvious that the filmmakers clearly have no idea how space works as multiple characters are able to pull themselves away from the vacuum of space by holding onto railings, seatbelts and a T-shirt.

24×36: A Movie About Movie Posters Review

I desperately wanted to burst out with laughter at the absurdity and blind stupidity of everything that happens in the last 20 minutes of Voyagers. If there was no alien, then why was there a clearly visible and moving shadow in space that isn’t shown through any POV beyond ours as the audience? Why the hell are there laser guns on a spaceship designed to harbor the future of humanity? How did Tye Sheridan know about the room when we are never shown on screen Farrell telling him? Why is it so easy to open said gun room with about three blokes using prybars? Wouldn’t it be locked up safe like a bank vault?

Even the filmmaking gets sloppier, resorting to nauseating shaky-cam and quick-cutting to stimulate tension that was obviously lacking in the script or performances. The dialogue gets dramatically worse, one particular scene where two of the bad kids are looking for Sheridan and Rose-Depp hiding in air ducts, one kid takes one of the duct panels off to reveal a shallow compartment full of cables and a massive circuit box, looks into the compartment for a good three seconds, then turns to the other and says in all seriousness “it’s too small, they couldn’t have gone through here”.

Wow.If you want a good hearty laugh at a cast and crew trying what I really hope is their best and failing hilariously, then I couldn’t recommend Voyagers enough. Neil Burger pulls out all his needlessly overproduced visual gimmicks that were impressive in Limitless and now are just rendered to loud and obnoxious editing that cuts to random stock footage during emotional scenes, and attention-grabbing CG camera zooms that emphasise nothing beyond a feeling of “what the hell is this?” Voyagers will be a black mark on these actors resumés, it feels like it should have been mercilessly dumped onto Netflix in January, and will go down as one of the worst films of 2021 for this reviewer.