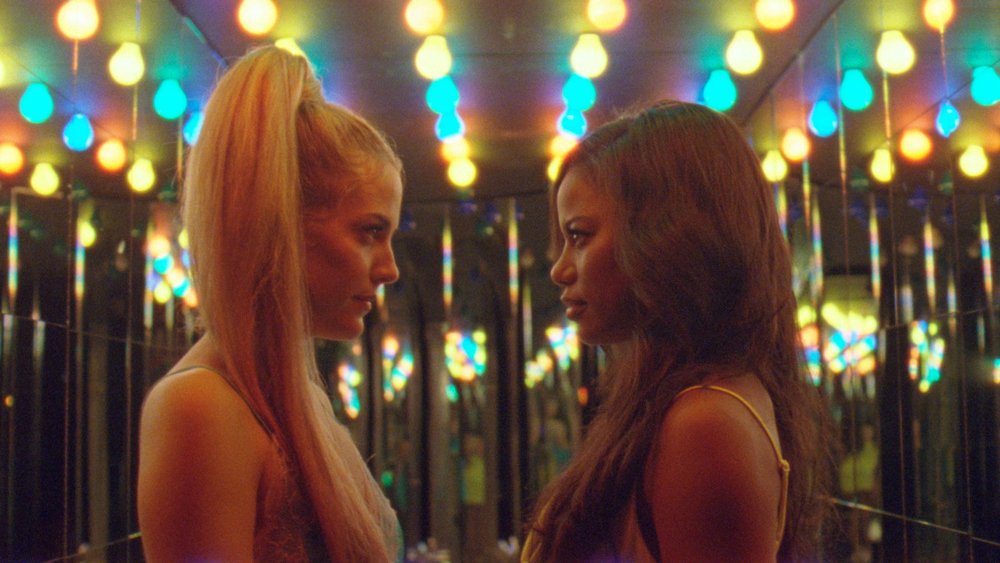 
When the sound of a notification bell goes off in black-comedy Zola, you know one of two things:

A story of two (perhaps three!) truth’s, Zola comes to us from the folks at A24. (Had the film not been based on existing material, you’d be forgiven for considering it as a spiritual sequel to 2017’s Good Time given its stylish and thrillingly escalatory nature.)

In writer-director Janicza Bravo’s adrenalinic adaptation, strong-minded waitress and part-time stripper, Zola (a magnificent Taylour Paige) strikes up a friendship with Blaccent tongued youth and sex-worker, Stefani (Riley Keough, beguiling). We know from first-glance of Stefani, whom we meet being serviced at the restaurant Zola works at, that her motivations might not be pure (“Old Enough,” responds Stefani when pressed for her age).

Stefani possesses an problematic candour which will spring many winces from the audience, particularly as she indulges in loose-lipped conversation with Zola; so comfortable speaking in Bregoli-esque vernacular and referencing Black culture, a possible nod to the experience of sex-work being a reality for many Black women (a pep-talk backstage, a highlight, is delivered with the vim of a church service). It is all too easy to label her diction and etiquette as ‘stupid,’ an insecurity expressed by her doting, love-struck partner, Derrek (Succession’s Nicholas Braun) who dreams of her a life away from sex-work.

Having quickly forged a camaraderie via text, Stefani offers Zola the chance to earn big dollars dancing in Tampa Bay. If everything is bigger in Texas, then surely everything is stranger in Florida. Scant details and driving past Confederate flags do enough to raise Zola’s concerns, however it is clear friendship has brought down her guard. Accompanied by Derrek and a mysterious and mercurial ‘roommate’ (Colman Domingo), the two gal-pal’s sally forth towards a wild weekend that will live on in digital infamy. The details of which are best left in the cinema..

In large part, Zola acts as an unwilling observer to the shenanigans that go down, often responding to events with a shocked-yet-unsurprised expression. It is not until she is pushed to her limits do we see her fight back; an effort she delivers with an uncompromising respect for herself, eventually migrating towards indifference as the antics intensify.

This perhaps represents the film’s only glaring shortfall; it’s clear one-sidedness for Zola. Despite efforts to convey Stefani’s perspective, a comedic vignette spoken down the barrel of the camera presents as delirium. Intentionally, and perhaps to avoid the lawyers chiming in, it is hard to distinguish which truth, if any, we are to believe. It ultimately sews doubt into the final product, presenting gaps and sudden edits that shakily positions Zola as a victim of circumstance.

Truth be damned, Bravo’s vision of a pastel-hued, celluloid nightmare, accompanied with an affecting synth score that further elicits a feeling of dream-like disbelief, is stunning. Ari Wegner’s illuminating cinematography creates for #InstaGoals, with her application of neon lighting creating a glow about as inviting – and probably as dangerous – as a UV mosquito lamp.

Efforts to imbue the film with aesthetic flourishes, including the camera flickering with every picture taken and the incorporation of the iPhone font in subheadings, creates for a welcomed connection to the film’s digital source material. Bravo proves a modernist and exciting filmmaker, opting to embrace form and figure as opposed to leave the camera staring at exposed bodies. Sex scenes, if not skirted over, only feature male nudity; a feat almost unseen in feature filmmaking.

Bravo comfortably shifts the film in and out of differing tones, dialling from black-comedy to moments of general concern. We laugh at the ridiculousness of the weekend if only to highlight the failures of a system that benefits from oppressed women. Whether deceitful or a victim, there is no denying Stefani’s complicit actions stem from the flow of misogyny, with the film making its themes surrounding worth and control abundantly clear: It is no business of men to be dictate, nor pass judgement, on how women earn a living; a message all the more important given America’s increasingly challenged stance on reproductive rights.

The saying goes you should never let truth get in the way of a good story, and in the case of Zola, the truth is relative.

Writers: Janicza Bravo, Jeremy O. Harris, (based on the tweets by A’Ziah King, the article Zola Tells All by David Kusher, and story by Andrew Neel, Mike Roberts)