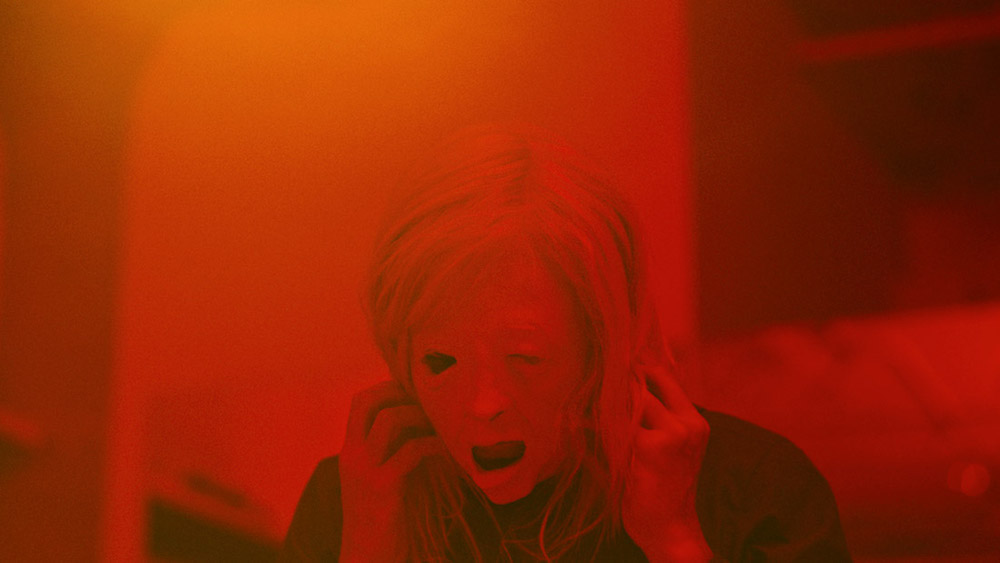 Possessor Review – Brandon Cronenberg’s Gorgeous, Gruesome, and Gloriously Deranged Film Has Him Moving Out of His Fathers Shadow

Renowned horror auteur David Cronenberg, famous for body-horror masterpieces like The Fly and Videodrome has not made a film since Map to the Stars in 2014. Any fans bemoaning the lack of “Cronenbergian” horror films these days are in for a treat as his son Brandon proves he is more than up to the task to follow in his father’s footsteps with his remarkably disturbing new feature Possessor, which also proves he is a filmmaker of enormous talent who is able to stand in his own light.

Tasya Vos (Andrea Riseborough) is a contract killer for a shadowy organisation who use a mysterious technology to possess the minds and bodies of individuals to perform assassinations for their wealthy clients. Tasy’s latest job is to inhabit the mind of Colin (Christopher Abbott) to get close to her targets, Colin’s girlfriend Ava (Tuppence Middelton) and her billionaire father John (Sean Bean). But something goes wrong with the transfer and Tasya’s consciousness merges with Colin’s and she can no longer tell where he ends, and she begins.

It is clear from early on that Brandon Cronenberg is heavily influenced by his father’s work. There is a fascination with bodily trauma and the ways that technology can alter human biology that is a clear continuation of the themes inherent in the elder Cronenberg’s work. But Brandon is no mere imitator. He has effectively created a 1980s-style body horror while updating it for the 21st Century, pulling together various concerns about the role of technology in shaping and distorting reality in a world where whole societies can be manipulated with the click of a button.

In a world where identities can be manipulated and controlled by malicious trolls or by tech companies via algorithm, we are in danger of having our sense of self subtly chipped away until we no longer recognise ourselves. In the case of Tasya, this literally occurs. When we see her with her own family, she is unable to connect or be present in the moment, but when she is in control of another person’s life through the headset she has a sense of fulfilment, of purpose. Her addiction to the technology, to other people’s lives, shatters her sense of self to the point that when she infiltrates Colin’s mind, she becomes truly lost.

Cronenberg portrays this fragmentation of Tasya’s mind with a combination of gorgeous neon drenched cinematography by Karim Hussain and practical effects that achieve a level of uncanniness. Showing the mind control process as a wax dummy melting in reverse for example, portrays Tasya’s journey as one of erasure, that every time she dives in, she loses a part of herself. This kind of old school technique adds that extra level of paranormal weirdness that would not be as disturbing if it were done with CGI.

This strange new world created by Cronenberg would not feel so frighteningly real if it weren’t for the pitch perfect casting of Riseborough. She expertly charts Tasya’s loss of self, her blank expression speaking more loudly than any of her monosyllabic words could. She is also supported by the cast assembled around her, with Abbott bringing an impressive portrayal as Tasya’s mirror image Colin, his own identity eroding from his feelings of inadequacy before he is tormented by the mind infiltration. Jennifer Jason Leigh is also terrific as Tasya’s cold and clinical superior.

Cronenberg’s first feature Antiviral demonstrated that he was a filmmaker of enormous promise who was ready to explore the same worlds and themes as his father before him. With Possessor, he has fulfilled that promise by creating a world that feels alien while simultaneously, all too familiar. He has proved that he can move beyond his father’s shadow to stand as a visionary in his own right, forging cinematic nightmares that speak to the times but which also contain warnings for the future, offering a grim outlook of humanity’s dark trajectory. Gorgeous, gruesome, and gloriously deranged, Possessor is stone cold classic in-the-making.