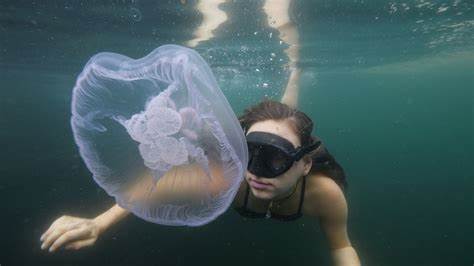 Descent is a beautiful film.

It follows professional free diver Kiki Bosch as she free dives in the coldest water possible. Taking one deep breath, and without a wetsuit, Kiki delves into the depths of the frozen lakes of Finland or the iceberg fjords of Greenland.

It’s an amazing and frightening skill, and it is exactly that. As Kiki has trained incredibly hard to be able to do what she does.

From the beginning of Descent, it is clear that she is one of a kind. Strong and resilient. Throughout the documentary, Kiki tells her story and it’s, at times, as horrifying as it is marvelous, but it’s all engaging. Freediving in freezing cold waters has not only challenged Kiki physically, but it’s also helped heal her deep scars.

Between Kiki recounting her story, remarkable cinematography shows Kiki diving under ice, with every chance she could get lost under the ice caps and be unable to surface, along with close encounters with death on film sets. This combined with her compelling words, make Descent a documentary that is well worth a look.