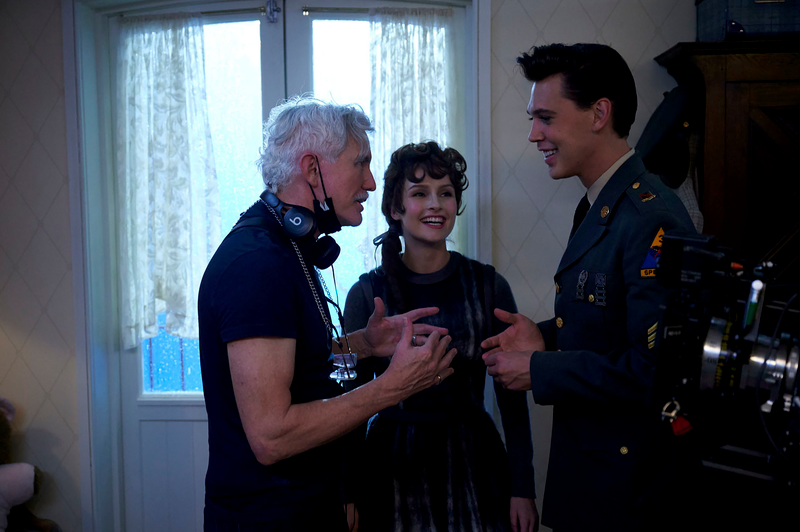 Olivia DeJonge is one of the most exciting actors to emerge out of Australia in recent years. With performances in films by celebrated directors like M. Night Shyamalan (The Visit) and Antonio Campos (The Staircase), and stunning with homegrown turns in the excellent Undertow and the Christmas horror-comedy Better Watch Out, Olivia lands her biggest role yet playing Priscilla Presley in Baz Luhrmann’s highly anticipated Elvis.

Hot off the globe-trotting publicity campaign which included a star-studded premiere at the Cannes Film Festival and a stunning home launch in the Gold Coast, Queensland, where Elvis was shot, Olivia caught up with Andrew to discuss the audition process, what steps she took to get into the mindset of Priscilla, and more.

I want to start off with the beginning of your process with Elvis, the audition process. What was that like?

Olivia DeJonge: For me I did a self-tape like everybody else and sent it in. And then a couple of months later, I found out that I’d got the role. It was kind of crazy. It sort of happened quickly, but also not. I was sitting at dinner with my agents and I remember I asked about it and I said, “Whatever happened with that movie?” And then they got a text message right there and then saying that I got the part so yeah, it was nuts.

What was your feeling at that time knowing that you’re going to work with Baz?

Did you grow up watching Baz’s films?

Wow. You grew up in Perth as well, didn’t you?

ODeJ: I did. I had such an incredible upbringing in Perth. I love Perth, I miss it.

What does that do to your mind to be like you’ve made it big?

ODeJ: I mean, I don’t know. It doesn’t really feel like that at the moment. We’re on this press tour. We’ve been making this movie for so long. I think maybe the breadth of it hasn’t really been felt because it still hasn’t been released yet. But you know, I’m just excited to be here and excited to be able to share this film with everybody. It was made with so much love and passion and appreciation for Elvis and his legacy. It’s been a great journey and I’m excited to see where it takes me.

How did you get in the mindset of Priscilla?

She’s got an audio book as well. I understand that you listened to that quite a bit too. Is that right?

ODeJ: I listened to her tour of Graceland. I’m listened to that most nights just to get used to the cadence of her voice and the way that she spoke.

It’s pretty immersive stuff. And I imagine getting the praise of Priscilla after she had seen it means the world to you. Is that right?

ODeJ: Oh, yeah. I mean, such a pinch me moment. There’s been so many times during the process of this film where I felt so incredibly nervous knowing that she was going to watch it. So knowing that she supports the film and really feel the sort of love that it was made with was such a sigh of relief. It’s been such a pleasure.

How do you prepare yourself for knowing that she’s going to watch it?

That makes sense. The chemistry that you and Austin have is tangible on screen. It is very powerful. How did you work together to create that bond?

ODeJ: I think for us, we knew how important it was, this chemistry between the two characters. Elvis and Priscilla, everybody looked up to them as this sort of iconic couple. Making sure that chemistry was tangible on screen was paramount to our jobs. He’s a great guy and we had such a great time making this movie together. So it was easy.

I can imagine. He’s so electric on screen and there were moments where I didn’t remember that it was Austin playing Elvis. I thought that it was Elvis on screen.

ODeJ: It was, yeah, pretty, pretty crazy what he did and how he threw himself into that role and was otherworldly.

What’s it like for you being on set watching that kind of performance and reacting against it?

ODeJ: It’s pretty easy to react authentically when someone’s really throwing themselves into a role like that. I have so much respect for him as an artist and as an actor. It was such a masterclass to watch him.

What was your favourite day on set?

ODeJ: Watching the 68 Special for the first time was also my first day as Priscilla, I had it easy that day and I just got to watch Austin sort of throw himself into the flames the way that he did. He brought the past into the present. And I think that’s an insane thing to pull off and he did it. He really, really did.

One of the things that really runs through Baz’s work is his strong and powerful women. What’s it like taking that role of Priscilla and following along the footsteps of Nicole Kidman and Carey Mulligan, all these iconic people that he’s worked with?

ODeJ: It definitely felt like big shoes to fill. But I think at the same time, I think even when I was auditioning, I really was keen to sort of strip away the complexity of it and just play a girl that was in love with a boy, and try and bring as much truth to it as I could. And I’m really happy that that seems to be translating.

It definitely does. I was in tears. As we were heading into the end of it, I thought it was so emotional to the max. But I’m also a huge diehard Elvis fan as well, so getting to experience it all was very emotional.

ODeJ: Absolutely. I mean, same. I cried like a baby the first time I saw it, so I totally get you.

ODeJ: I think it’s that thing when you’re in a different country, and you’re there to do a job. By that, I mean there’s no room for distraction. I think that being foreign means that every opportunity that comes your way overseas really is something you’re going to seize and you’re going to take it for what it’s worth. And there’s also a beautiful community of Australian actors and creators out there that really look after each other and really look out for each other and put each other’s best interests at heart. So I think it means community.