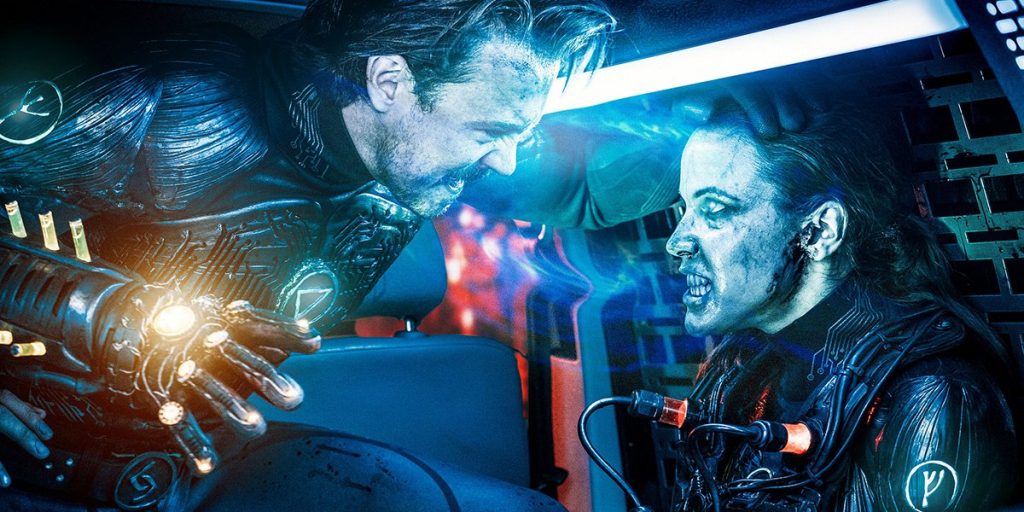 A few years on from their gleefully gross zombie flick Wyrmwood: Road of the Dead, sibling directing team Kiah and Tristan Roache-Turner bring us their second feature, Nekrotronic (also known as Nekromancer in some markets). “Gleefully gross” is also an apt descriptor here, although Nekrotronic is a much slicker and more professional-looking affair than their smell-of-an-oily rag debut. The shorthand is basically “Ozploitation Ghostbusters” so if that sounds like your jam, you’re probably in for a good time here.

Our hero is septic company dogsbody Howie North (Ben O’Toole) who is enduring a typically degrading day of work with  his friend, coworker, and comedy heavy lifter Rangi (Epine ‘Bob’ Savea) when the lid gets ripped off the world and he gets clued into a covert supernatural war being waged between honest-to-Milton demons and human Nekromancers – hereditary warriors who use a mix of magic and technology to keep the forces of Hell in check. Orphan Howie is actually a Nekromancer by birth, his parents having been offed by Monica Bellucci’s chief villain back in the day (shades of Harry Potter there).

Recruited by Nekromancer Luther (a shotgun-wielding David Wenham having a heap of fun) and his daughters/apprentices Molly (Caroline Ford) and Torquel (genre regular Tess Haubrich), Howie finds himself caught up in a battle to stop a supernatural app (think Pokemon Go but with demons) from being used to suck the souls from the entire population of Sydney. And off we go.

Nekrotronic works a treat when it’s in motion – the faster it’s going and the weirder it’s being, the more fun you’ll have. It’s a B-movie that knows it’s a B-movie, with the Roache-Turners (Kiah directs, Tristan produces, they co-write together) loudly paying homage to the various VHS genre mainstays they were clearly reared on. The action is frenetic and fun, the effects and prosthetic work imaginatively gruesome, the overall aesthetic a neon-and-chrome retro-future jam which is a bit like if Drive had a sense of humour.

The problem is that it isn’t always in motion, and the apparent need to explain the film’s slightly-too-complicated-for-it’s-own good mythology frequently trips us up. The opening info-dump is a drag, and in the second act the Roache-Turners pretty much stop the film dead to give us a breakdown of all the magical-technological toys the Nekromancers use to wage their war (it’s forgivable to a degree because, hey, all these suits and guns are very cool, but there had to be a better way).

The comedy is hit and miss, although that’s in the eye of the beholder, I guess. The film is very much operating in the broad larrikin idiom, which means that satirical opportunities afforded by the conceit are generally bypassed in favour of cruder gags. And hey, I’m no snob when it comes to toilet humour, but you sense there’s a wittier, snappier script just a draft or two away from what we actually got.

Still, Nekrotronic is fun, and its fierce desire to entertain is always palpable. In technical terms it’s a quantum leap up from Wyrmwood, and there’s no doubt that as filmmakers, the Roache-Turners have serious chops. This isn’t the film that is going to make them household names, unfortunately – it’s just a little too shapeless, a little too self-indulgent and rough around the edges. But I’d bet cash money their next effort is going to be a banger.