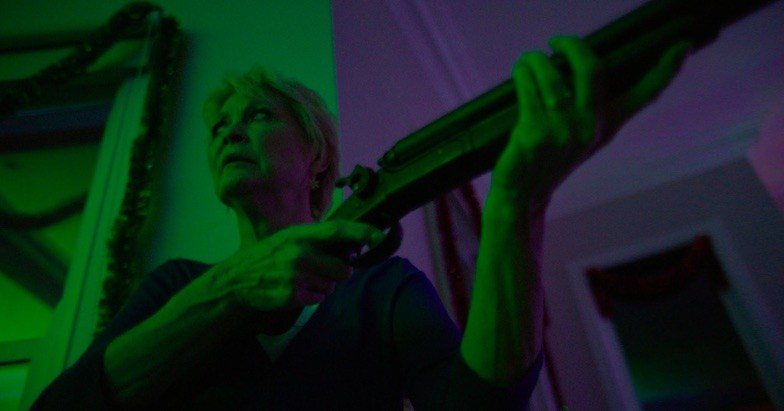 In the world of Australian cinema, there is a great dearth of Christmas related films. The last true ‘Christmas’ film, Crackers, hit in 1998, meanwhile the last major film that was set around Christmas time hit in 2005 with The Proposition. Craig Anderson has decided to stoke the embers and rage that Aussie Christmas fire once more with his horror flick, Red Christmas. Now, given the dry summers we have in Australia, this is more a simmering barbecue than a full blown bushfire, but you get the drift.

Working with a low budget, Anderson’s film tells the story of a mother (Dee Wallace’s Diane) who has brought her family together for Christmas dinner. The family is growing with Janie McGavin’s Ginny due to give birth at any moment. It’s also about to grow in a completely unexpected way with the arrival of a cloaked figure, Cletus, in search of their mother.

Cletus (Sam Campbell) is possibly the most contentious element of this button pushing horror flick, with his arrival into the world displayed in the films opening moments where an abortion clinic is targeted by a bomber. Still alive, Cletus is rescued from a biological waste bin. It’s not much of a spoiler to say that adult Cletus is Diane’s aborted child.

Red Christmas is full of ideas that challenge and push the viewer into uncomfortable territory. Many horror films have an illogical premise that stretches the concept of believability, but they employ that illogical premise simply to explore ideas that other genres possibly can’t tackle. Craig Anderson’s film is full of lofty ideas, but unfortunately is a few script polishes away from being able to really delve into them in the horror format.

On top of this, the aspect that usually would allow viewers to forgive a less than stellar script – the gore – is sadly lacking. There is definitely the foundation for a series of great kills, but due to budgetary reasons these deaths happen mostly off screen. An early death should have been excessively bloody, and no doubt on paper it helps set the fear factor for the rest of the film, but it occurs out of shot and is more suggestive of the outcome than anything else. With that said, a few exciting third act deaths attempt to close the gap and almost make up for the lack of gore.

The characters are particularly over the top, with the family being a disparate group of individuals who feel like concepts rather than characters. An uber-religious couple is opposed by an alcohol swilling, drug smoking, couple. A brother or an uncle played by Geoff Morrell feels extremely out of place. Gerard Odwyer plays Jerry, the youngest son who happens to have down syndrome. No matter the differences they all have, all are united as one family in rejecting the plea for love from Cletus.

On retrospect, this united disgust at Cletus’ presence feels like Anderson’s trying to say something – as an unborn child, nobody wanted him, and as an adult, he is equally rejected – and in some regards, Anderson does put the viewer in an uncomfortable position of siding with a group of people who would reject a stranger on Christmas. That uncomfortable line is torn asunder as the deaths start piling up and the histrionics from the terrified family amplify.

Red Christmas is pulled together by horror veteran Dee Wallace, who brings a welcome energy to the mix. Her scenes with Gerard Odwyer work well, with a particularly effective climactic bringing into question the reasoning for Diane’s abortion all those years ago.

Unfortunately, if there’s one major detraction from Red Christmas, it’s the chaotic and incoherent cinematography. Camera placement becomes a slice of avant-garde art here with shots from the strangest of angles that make the actions incoherent. The homage to Dario Argento’s use of bright, varied colours is a welcome addition as it helps differentiate rooms in the house from one another. The green drenched kitchen and the death that comes with it is a particular standout.

When a film sets out to push buttons and provoke elevated feelings, and it doesn’t always earn or manage to attain those feelings, then you can’t help but question why it’s doing it in the first place. Within the horror genre, exploitation and the use of extreme, socially heated topics, is something that’s a regular occurrence. Horror viewers are particularly more forgiving of these aspects, but other viewers may be less accepting.

Craig Anderson’s direction is fine, but one can’t help imagine the creativity and elevated quality of it if he were given a budget to work with. The script has some great lines of dialogue, but falls short of dealing with the complexity of the themes that come with the subject of abortion. Is this going to reinvent the Australian Christmas film? Probably not, but it’ll certainly be an entertaining enough curio for the horror fans of the world.

Red Christmas is out on DVD and Bluray via Umbrella Entertainment and comes with a commentary with writer/director Craig Anderson and actor Gerard Odwyer. While the film itself is fun, the real gold is the discussion these two have. It’s an interesting dive into the making of the film and makes the physical version of Red Christmas one worthwhile seeking out.